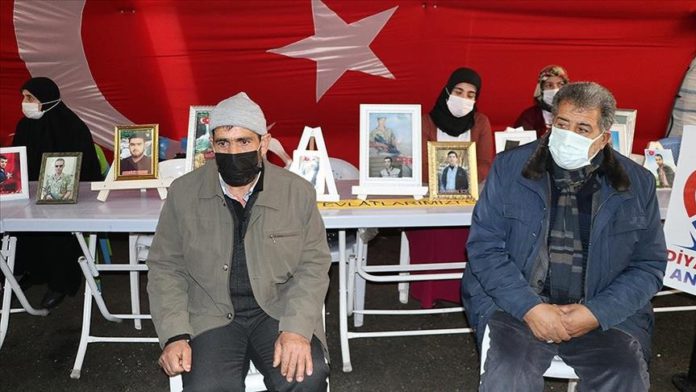 One more family has joined the sit-in in Turkey’s southeastern Diyarbakir province against the PKK in an effort to bring back their children abducted by terrorists.

The protest outside the office of the Peoples’ Democratic Party (HDP) — which the government accuses of having links to the YPG/PKK — began on Sept. 3, 2019, when three mothers said their children had been forcibly recruited by YPG/PKK terrorists. It has been growing every day.

Bayram Yetkin joined the protest for his son Recep, who was abducted by terrorists in 2015 when the boy was 15 years old.

Yetkin said his son was working as a shepherd and left his home to graze animals on the day of abduction but never returned.

“What are you doing there in the mountains? Come back to your father,” said the weeping father. “They deceived you at the age of 15. Come, take refuge in our state.”

In its more than 30-year terror campaign against Turkey, the PKK — listed as a terrorist organization by Turkey, the US, and the EU — has been responsible for the deaths of 40,000 people including women, children and infants. The YPG is the PKK’s Syrian offshoot.

George Floyd protests continue in US for sixth day