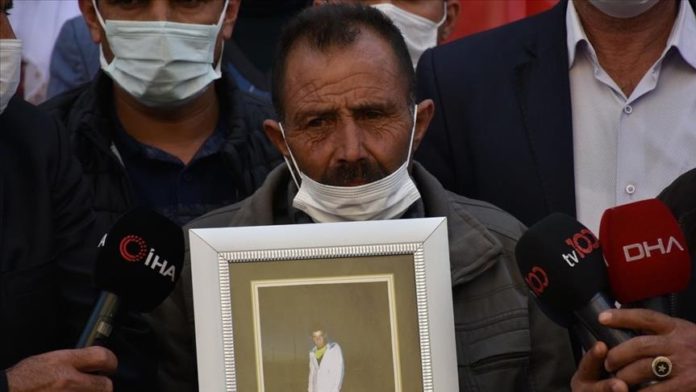 One more family joined the ongoing sit-in protest against the PKK terror group in southeastern Turkey on Thursday.

Families of children abducted or forcibly recruited by the PKK terror group have been protesting for more than a year in the Diyarbakir province, calling on their children to lay down arms and surrender to authorities.

The protest outside the office of the Peoples’ Democratic Party (HDP), which the government accuses of having links to the PKK, was started by three mothers on Sept. 3, 2019.

Sabri Kilic, who came from the eastern Mus province to join the sit-in, said his son Mehmet was abducted by the terror group seven years ago at the age of 16.

“I want my child back. I haven’t heard from him. The HDP deceived him and sent him to the mountains,” he stated.

He called on his son to surrender to security forces.

“Wherever you are, come back, my son [..]. Your mother is sick. I will not leave the protest site until you come back,” Kilic

Separately, a group of families whose children were kidnapped by PKK terrorists and taken to the mountains, and those who lost family members in terror attacks, marched to the HDP’s office in southeastern Sirnak province.

“While HDP members send their own children abroad for studies, making them civil servants, doctors, and engineers, they send children of poor people like us to the mountains. I want my child back,” Aslan added.