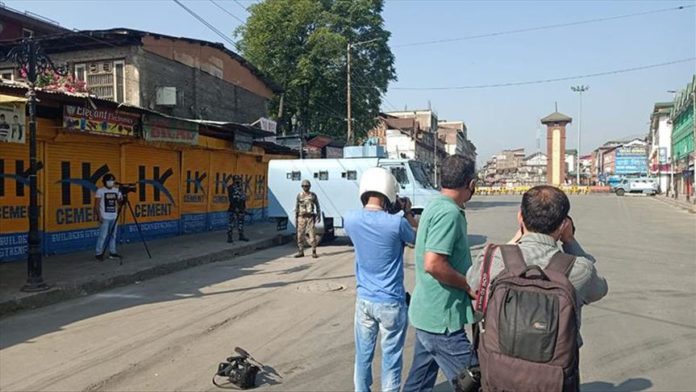 “Kashmiris have now become more distant from the rest of the country as their hopes have shattered. This distrust has led to terror, “said the retired Air Vice Marshal Kak in an exclusive conversation with Anadolu Agency.

He is one of the many petitioners, who have moved the Indian Supreme Court challenging the abrogation of constitutional provisions and annexation of the region.

“Terror still operates and has encouraged militancy. Firing from the Pakistan side has increased too. Every human activity from education to agriculture has been deeply affected. Instead of improving, the situation has gone worse,” he added.

Article 370 of the Indian constitution allowed Jammu and Kashmir some degree of autonomy in terms of having its constitution and empowered state assembly to make laws. It also provided a legal shield to protect the demographic character of the Muslim-majority region, as outsiders were not allowed to settle and buy properties.

Further, he said the physical distancing enforced by COVID-19 pandemic and the psychological distance created by the annexation, the Kashmiris have further moved away from the rest of India.

A decorated IAF pilot, who participated in in 1965 and 1971 war against Pakistan said, the last year Aug. 5 decision should not have been taken without the consent of 7 million people living in the region.

“Kashmir is an issue, which would have come to a resolution with the involvement of the Kashmiris and bilateral talks, “he said.

He points out at the agreements and declarations signed between India and Pakistan on various occasions including 1972, 1999, and 2004, mention that the Kashmir issue needs to be resolved by both the countries.

“This has not been a wise decision on the part of the Indian government to resolve the issue on its own. Instead of resolving, they have made it more complex,” said the former deputy IAF chief.

Kakis among the few Kashmiri Pandits (Hindus), who have not let the trauma of their exodus from Kashmir Valley in 1990 to affect the rationale. In 1989-90, when militancy started in Kashmir, many Kashmiri Pandits left their homes to settle a 300-kilometer (186 miles) away in the plains of the Hindu majority region of Jammu.

“Kashmiri Pandits’ exodus was the most painful. There was never a clash between the two communities since the 7th century when Islam came in the region. Despite the 1990 exodus, there was a bond. But last year’s desperate developments that took place have created an atmosphere of fear. The bond and togetherness between Kashmiri Pandits and Muslims are virtually wiped out,” he said.

On the return of Pandits (Kashmiri Hindus) to their homes in Kashmir, Kak said that it has been hurting to be a part of the community that has been deprived of its cultural moorings.

But returning to Kashmir Valley and co-existing is problematic now since the revocation of special status was not for the return of the Kashmiri Pandits to Kashmir.

“Most of the Pandits who left Kashmir were openly accepted by other state governments and were given reservations and quotas in government sectors, which led them to take-up majoritarian views. If they now want to return, they should not do so with pulses of majoritarian forces, which will lead to further distance with Muslims and a tense atmosphere,” said Kak.