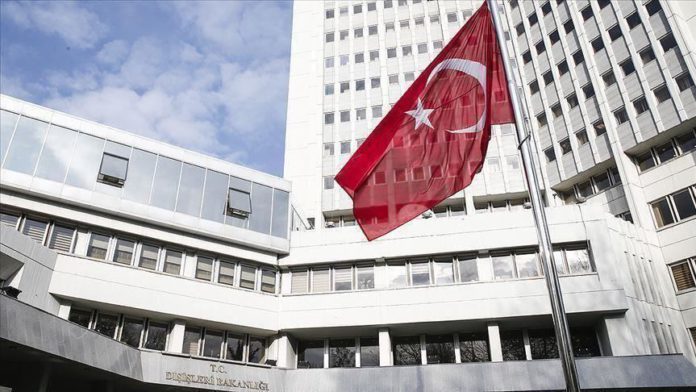 Turkey on Monday slammed a visit to Moscow by a terrorist YPG/PKK-affiliated group, saying Russia should avoid steps that serve the interests of terrorists who threaten both Turkey and Syria.

“We are concerned that a group consisting of elements of the so-called ‘Syrian Democratic Council,’ led by the terrorist group PKK/YPG, will be invited to the Russian Federation and accepted at a high level by Russian officials,” the Turkish Foreign Ministry said in a statement.

Reports since the statement indicate the meeting may have already happened.

“We expect the Russian Federation to act in accordance with the spirit of Astana [peace process for Syria] and the commitments made in the Astana format meetings and to avoid steps that will serve the agenda of PKK/YPG-affiliated groups,” the statement added.

The ministry described the PKK/YPG as “a terrorist group which persecutes local communities in areas of its de facto control and targets Syria’s territorial integrity and threatens the national security of Syria’s neighbors, especially Turkey.”

Since 2016, the Turkish military has launched cross-border operations into northern Syria to free locals from YPG/PKK terrorist rulers and protect Turkey from a terrorist corridor at its borders.

The statement added that combating terrorism in all its forms and standing against separatist agendas that harm the national security of neighboring countries as well as Syria’s territorial integrity is a common commitment made in joint statements issued at the end of high-level meetings held in the Astana format. (The meetings began in Astana – now Nur-Sultan – Kazakhstan in 2017.)

“In a joint statement made as a result of the meeting held by Astana guarantors in Geneva on Aug. 25, 2020, a common attitude against the separatist agendas of illegitimate formations was declared,” the statement added.

On Aug. 25, Turkey, Russia and Iran reaffirmed their commitment to Syria’s sovereignty, independence, unity, and territorial integrity in a joint statement on the margins of the third meeting of Syria’s Constitutional Committee held in Geneva.

Turkey will convey its displeasure with the meeting through a delegation led by Deputy Foreign Minister Sedat Onal, who is visiting Moscow for political consultations, the statement added.

In its more than 30-year terror campaign against Turkey, the PKK – listed as a terrorist organization by Turkey, the US, and the EU – has been responsible for the deaths of 40,000 people, including women, children and infants. The YPG is the PKK’s Syrian offshoot.