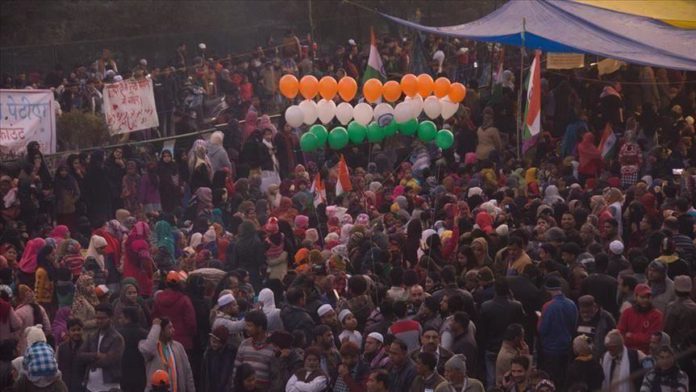 A group of students protesting a controversial citizenship law in India accused the government of continuing to “witch-hunt” although the country is being enmeshed in COVID-19 pandemic.

Organizer of the protest against the law — known as Citizenship (Amendment) Act or CAA which passed in the parliament last December and led to widespread protests across the country, drawing worldwide criticism — said the police continue to arrest participants despite the virus lockdown and claimed that “the government is misusing its power to create fear.”

More than 190 student groups in India have organized virtual protests in the past week demanding the release of activists arrested for taking part in demonstrations against the citizenship law earlier this year.

Since a nationwide lockdown to combat the spread of the novel coronavirus was imposed in March, police in the capital New Delhi have been hunting down all those involved in the protests.

Many young student activists have been arrested under the Unlawful Activities (Prevention) Act since March, including Safoora Zargar, a four-month pregnant sociology doctoral student.

Several members of the women’s student group Pinjra Tod and the Jamia Millia Islamia Coordination Committee are currently behind bars.

The theme of the protests has been coined from Amir Aziz’s poem Sab Yaad Rakha Jayega, which translates to Everything Will Be Remembered.

“This government’s oppression and the protesters will be remembered,” Akshat Seth, the general secretary of the Students’ Federation of India (SFI), told Anadolu Agency.

Seth said a disturbing trend of hunting agitators has started since the lockdown’s inception, and the state machinery is being utilized for the same by the government.

“We’ve seen students being incarcerated and questioned, even only for being present at the protest site earlier this year. The whole idea of these virtual protests is to demand the release of peaceful protesters and press the government to take action against the real culprits of the Delhi pogrom,” he said.

The citizenship law, passed by India’s parliament in December last year, has sparked protests and riots in the country. The law seeks to grant citizenship to Hindus, Sikhs, Buddhists, Christians, Jains and Parsis who entered the country from Pakistan, Bangladesh and Afghanistan until Dec. 31, 2014, leaving out Muslims.

Violent communal riots over the law also broke out in New Delhi in February, leaving more than 53 people dead and over 250 injured.

In mid-May, the ruling Hindu nationalist Bhartiya Janata Party released a nine-minute video celebrating six years of Prime Minister Narendra Modi’s government. The video indicated the enactment of the new citizenship law, or CAA, as one of the major achievements of Modi’s second term of tenure.

Activists have come forth to point out that the government is abusing its power and ignoring the Supreme Court’s guidelines to decongest prisons to avoid the spread of the coronavirus pandemic.

Speaking to Anadolu Agency, Gunjan Singh, a Supreme Court advocate and the head of litigation at the Human Rights Law Network, said the entire anti-citizenship amendment experiment has been against one “minority” community with the government arresting those who conducted peaceful protests while trying to shield their own people.

“The government’s focus has always been on creating fear by imposing platonic laws. I have seen cases where people who were not actively involved in the protests have been booked under anti-terror laws, just because of the community they belong to,” underlined Singh.

He said that booking people under these laws is simply so these dissenters do not get bail easily and remain behind bars until the case is running and the Delhi police have played a big role.

For instance, two students — Natasha Narwal and Devangana Kalita — of the women’s students group Pinjra Tod were arrested late May. When the magistrate granted them bail, citing no act of violence, the Delhi police again arrested them a week later under more cases involving the Arms Act and attempted murder.

Safoora Zargar was arrested on April 10 for attending the protest. While she was granted bail by the court three days later, the police again arrested the pregnant student under the anti-terror act, thus leading to the rejection of bail.

On June 10, the US State Department released a report which stressed the need to ensure full protection of minorities in India.

The 2019 International Religious Freedom Report, an annual survey of the state of religious freedom across the world, was submitted to the US Congress.

The India section of the report says US government officials underscored the importance of respecting religious freedom and promoting tolerance and mutual respect among people, as the ruling and opposition parties, civil society and religious freedom activists, and religious leaders all belong to various faith communities, news agency PTI reported.

The controversial law has been called fundamentally discriminatory and anti-Muslim by the UN Human Rights Office.