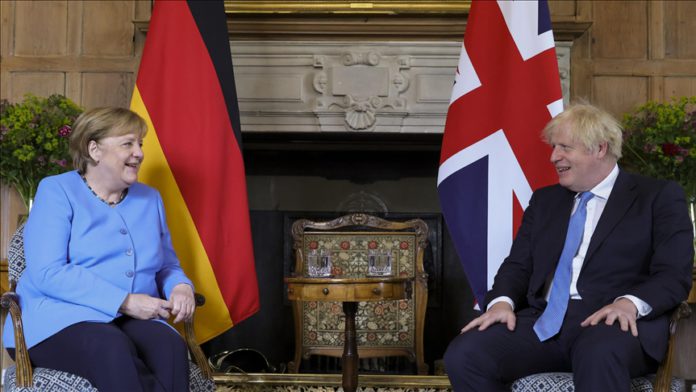 Merkel is paying her last visit to the UK as Germany’s chancellor before leaving the office in coming months.

“The Prime Minister [Boris Johnson] welcomed Chancellor Angela Merkel to Chequers today, where they agreed a number of new initiatives to expand links between the UK and Germany,” a statement from Johnson’s office said following their meeting.

“I’m very pleased to welcome Angela here on the last of the 22 visits you have made to the UK in your 16 years as German Chancellor,” Johnson said at a joint news conference following the meeting.

“In the course of that time some things have changed beyond recognition but for much of your tenure it was certainly a tradition, Angela, for England to lose to Germany in international football tournaments,” he said.

“I’m obviously grateful to you for breaking with that tradition, just for once,” Johnson said, referring to England national football team’s recent 2-0 victory over the German team.

He said: “Angela, on behalf of the UK, I want to thank you for your truly historic commitment to not just to the UK-German relationship but to global diplomacy more generally.

“I think over the last year, 18 months in particular, your scientific expertise has been instrumental in guiding the global response to the pandemic, and, as I was saying, a commitment to science and research is something our counties share and want to develop together.

“It is no coincidence that two of the world’s most successful coronavirus vaccines – Pfizer Biontech and Oxford-AstraZeneca – came out of German and British labs.”

Merkel, for her part, said: “It is, now that Britain has left the European Union, a good opportunity to open a new chapter in our relationship.”

“Obviously this was not a voluntary offer on my side to create the right mood for this visit but I have to accept it,” Merkel responded to Johnson’s remarks of football defeat in EURO 2020.

“You deserved it but we were a little bit sad but now the best of luck to the British team,” she added.