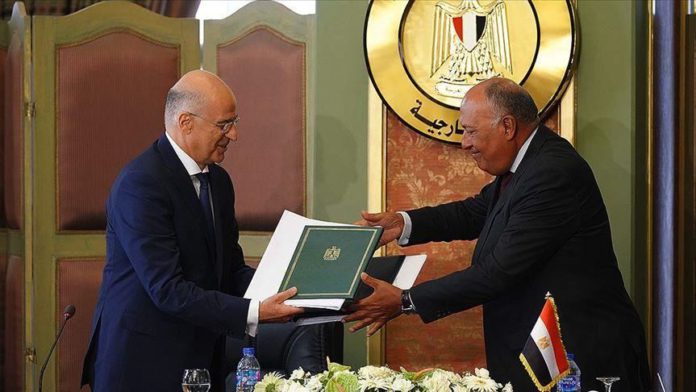 Last Thursday, Greece and Egypt signed an unfeasible maritime deal, creating more frictions and deepening internationalized conflict in the Eastern Mediterranean. This agreement is full of ramifications endangering regional peace and stability by violating continental shelves of Turkey and Libya.

Instead of seeking a mutual resolution including all stakeholders, Athens and Cairo embarked on a one-sided partnership not based on regional facts; a clear example of a nonconstructive geopolitical unilateralism fueling tension in the region. Ankara views this agreement as a provocative move to isolate Turkey, the Turkish Republic of Northern Cyprus (TRNC) and even Libya from the Mediterranean Sea from taking advantage of the region’s resources.

Turkey’s Foreign Ministry has emphasized, “The supposedly-delimited area lies within the Turkish continental shelf as declared to the United Nations. This so-called agreement also attempts to usurp the rights of Libya.”

Greek Prime Minister Kyriakos Mitsotakis and Egyptian President Abdelfattah el-Sisi’s anti-Turkey diplomacy has been a significant hindrance in the recent years. The politicking and cheap maneuvers by Athens and Cairo have brought a potentially fruitful dialogue to a standstill. These tactics have prevented all actors in the Eastern Mediterranean from benefiting from the energy potential while heightening tensions in the region.

Before it is too late, it is time for Greece, the Greek Cypriot administration and Egypt to try a more constructive approach, namely regional cooperation. Such an approach would be far more productive in solving current disputes with Ankara and can pave the way for a fruitful resolution of existing issues.

Before this Greece-Egypt maritime deal, it seemed for a while that common sense was starting to prevail in Athens. There seemed to be a fresh intention to engage in dialogue. For instance, recent statements emanating from Greek diplomats appeared to be leaning towards finding a political settlement. These statements found an echo in Turkey, which, as always, has been extending the olive branch to its neighborhood.

In this context, last week after describing Greece as an “important neighbor”, Turkey’s Presidential Spokesman Dr. Ibrahim Kalın stated, “While the negotiations are continuing, let us be constructive and hold (energy search) for a while… We are ready to discuss (all disputes) with Greece without any conditions.”

Perhaps the new conciliatory tones between the long-time protagonists would be the beginning of a long-lasting solution to the Eastern Mediterranean’s energy dilemma.

However, this unfeasible maritime deal has also stalled such a potentially fruitful cooperation in the region.

Such projected partnerships with Turkey would also benefit from Turkish capacity and could efficiently boost the commercial aspects of the newly discovered natural gas resources. The latter would be plugged into the growing ‘pan-regional energy hub’ that Ankara has been building in the past two decades. With its existing energy pipelines like the TurkStream and TANAP, the Eastern Mediterranean energy outputs would easily reach European markets.

Such mutually beneficial drilling and transportation partnerships are only the tips of the iceberg. The region would considerably expand cooperation on many other economic levels.

Of course, such an ideal scenario faces numerous obstacles. Besides the hardline politicians whose careers depend on making incendiary statements, there is also reluctance in some European quarters, especially France.

Paris has been notoriously inflaming the situation. Instead of encouraging a blueprint for a just settlement that could be accepted by all parties in the region, French President Emmanuel Macron demanded EU sanctions against Turkey by claiming “violations” of Greek and Greek Cypriot administration’s waters and also invited the European Union to act on the crisis in Libya.

French allegations that Turkey’s legitimate activities in its southeastern shores are “violations” do not assist in fostering regional partnership and will not help in solving existing disputes.

Maybe President Macron mistakenly thinks that he could push Turkey into a corner by issuing such statements. A majority of observers, however, including European ones, have taken his statements for what they really are: Defective tactics from his failed policies in Libya.

Indeed, President Macron and his Foreign Minister Le Drian have put all France’s eggs in the basket of warlord Khalifa Haftar. This has proven to be a strategic mistake. So, Macron’s statements are merely an attempt to deflect the blame on to Turkey, while sweeping his ill-thought policies under the rug.

Another obstacle confronting regional collaboration is the Cyprus problem. However, pragmatism can still prevail. All parties can find a mutual understanding to explore hydrocarbon resources through a common platform involving experts from all sides without reviving past enmities.