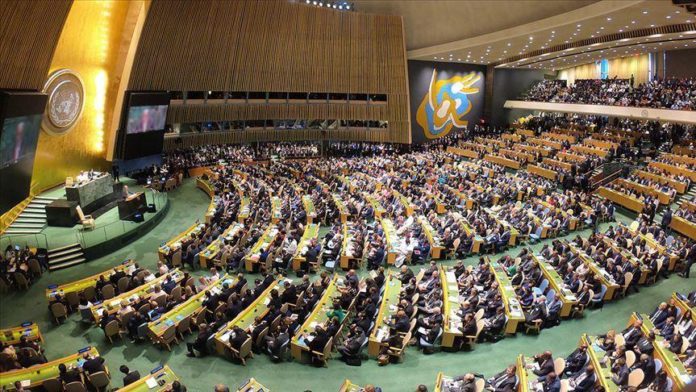 “Turkey has been building its local and international policies on the principle of ‘leaving no one behind’ since the adoption of Agenda 2030. Only this way can the goals of eliminating poverty, hunger and inequality and of providing education and healthcare services to all be achieved” President Recep Tayyip Erdogan had said.

Ambassador Volkan Bozkir, the President of the United Nations General Assembly, put forth an ambitious agenda during his maiden speech before the world body on Sept. 14, 2020. “It is not only a health crisis, but a social and economic crisis, which has exacerbated existing challenges the UN is seeking to overcome through the 2030 Agenda for Sustainable Development and the Sustainable Development Goals (SDGs).”

Let us try to analyze some of these SDGs set out by the United Nations. It is a fact that while citizens of some African and Asian countries are starving, the rich countries are beset with obesity. Discrepancies of these types are morally disturbing. The United Nations is ideally suited to ending these shocking inequalities because it hosts all the nations of the world and endows each with identical voting power in the General Assembly. The poorest and the weakest are equal to the richest and the strongest.

The most urgent approach to promoting a global partnership for sustainable development is the ending of warfare. War, whether intramural or international, wreaks havoc on the elements necessary for health, housing, education, employment, the rule of law, the environment, and happiness generally.

War is enormously expensive. It diverts resources from schools, hospitals, roads and telecommunications to AK-47s, Kalashnikovs, missiles, bombs and artillery shells. Moreover, wars regularly entail the use of child soldiers, for example, in Sierra Leone, Angola and Sudan. The children are deprived of educational opportunities. Many are maimed and become permanently disabled from productive employment. Others become emotionally and psychologically disturbed, an ailment that routinely finds expression in criminal or anti-social behavior. By killing or deracinating the flower of youth, war keeps a country immersed in misery and underdevelopment.

War also creates a culture antithetical to democracy and the rule of law. It teaches that disputes should be resolved by the bullet in lieu of the ballot box.

I admit that denunciation of warfare is easier than prevention. But if mankind can assemble knowledge to send men to the moon and Land Rovers to Mars, the knowledge necessary to end wars cannot be far behind. As is said in the Song of Solomon, “They shall beat their swords into plowshares, and their spears into pruning hooks: nation shall not lift up sword against nation, neither shall they learn war anymore.” Prophet Muhammad appealed to the conscience of human beings by saying, “The pen is mightier than the sword.”

The second urgent global sustainable development objective should be universal literacy and education. As Socrates explained, the unexamined life is not worth living. Or as philosopher Sam Johnson amplified, there is the same difference between the learned and unlearned as between the living and the dead. And as the Quran says, “Are those who know equal with those who know not?” These observations are made not to deride or degrade the uneducated but to underscore the criticality of education to making life morally meaningful and fulfilling between ashes to ashes and dust to dust.

Education is also human capital that fuels economic growth. A worker’s productivity and compensation generally rise commensurate with educational achievement. In addition, education correlates with a worker’s ability to shift jobs and master new skills in an ever-changing global economy.

The United Nations should thus develop educational yardsticks that a nation must satisfy to receive economic or military aid from third parties, including the World Bank and the International Monetary Fund. The yardsticks should be incorporated in a treaty to be ratified by all United Nations members. A civilization lives by symbols, and what could be more inspiring than privileged persons sacrificing on behalf of underprivileged ones.

Third on the global sustainable development agenda should be the elimination of poverty and the securing for every man, woman and child a right to flourishing health, a clean environment, comfortable housing and nutritious food. The goal is not a choice but a moral obligation. Thus, rich countries should transfer much of their riches to poor countries.

Next on the list of global sustainable development priorities should be the ending of all racial, ethnic, or class hatreds or enmities. Think of the horrifying quantity of violence in the world whose fundamental cause can be traced back to such social divisions. It infects every country on the planet. And if even one person suffers from invidious discrimination, then all are threatened and civilization has been tarnished.

The attainment of equality for women is another pressing yardstick of global sustainable development. Experience and intuition both demonstrate that women are as intelligent as men. They are as entrepreneurial and disciplined. They contribute every bit as much to economic growth and social cohesion as men. It is thus imperative that women receive the same legal rights and social dignity as men if global sustainable development is to advance.

The halting of trafficking in women or children to provide sexually decadent pleasures for the rich and squalid also should rank high on the agenda of global sustainable development. Degradation as commercial sex objects is morally repulsive. The United Nations must do everything in its power to end the vile practice. It scars women and children both physically and emotionally. It enriches the wretched and rewards the worst lusts.

Similarly repugnant is trafficking in children for slave labor. The parental sellers, the buyers, and the users of child slave labor should be held accountable as criminals. Children are the future of mankind. They cannot be permitted to groan, suffer and wither to satisfy the greed and lust for the pleasure of the wicked.

Global sustainable development also requires universal access to the Internet, a technological marvel that brings the excitement of knowledge and the joys of instant communication to every user. The United Nations should play a key role in the universal access quest.

A clean environment is also essential to global sustainable development. Pollution is more than twice cursed. It damages crops. It kills lakes and rivers. It occasions disease and illness through water and air, for example, lead poisoning or cholera. And it may even cause the submersion of entire island nations through global warming, a variation on the biblical flood. A clean environment, therefore, is a key element of community fairness and justice.

Let me with great humility offer a few closing observations about the entire global sustainable development enterprise. It is characteristic that national or international organizations employ quantitative benchmarks to measure success in meeting enumerated objectives. For instance, a longstanding objective has been for each nation to contribute a specified percentage of its gross domestic product for humanitarian or foreign aid. Companion quantitative benchmarks have been set for literacy, vaccinations, annual income, longevity, smoking, etc.

There is nothing inherently mischievous about these development yardsticks. But they should never distract from our recognition that the highest in sustainable development consists of non-quantifiable characteristics. These would include acts of charity, humility, courage, benevolence, magnanimity, self-restraint, and non-vindictiveness. It would seem to me to turn logic and morality on their heads to award higher sustainable development acclaim to a nation whose citizens were universally economically prosperous, literate, healthy, long-lived, non-polluting, but also mean-spirited, selfish, and egotistical than to a nation whose citizens were impoverished, plagued by disease, but were generous in time, effusive in hospitality, austere in habits, and selfless for the community.

These goals seem to be ambitious, but as President Erdogan amplified on Nov. 1, 2020, “We must fulfill our responsibility, not only for ourselves and our countries but also for the future of our children.”

'EU should support Turkey for hosting over 4M refugees'