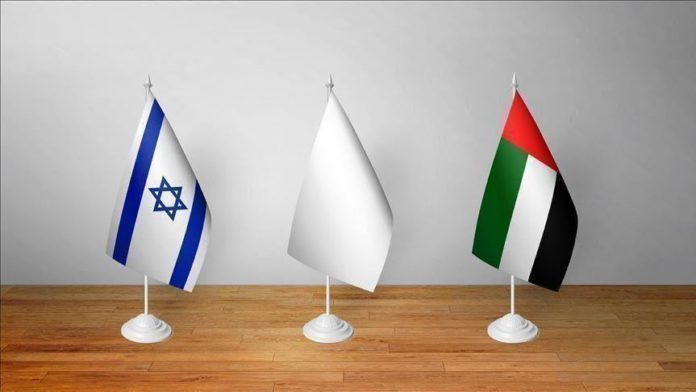 The bonhomie between the UAE and Israel had begun with the innocuous opening of the headquarters of the International Renewable Energy Agency (IRENA) in Masdar City of the Gulf state in 2008.

Under the cover of attending meetings of the UN agency, Israeli diplomatic representatives and ministers over the years traveled to the Emirati capital and held meetings with counterparts on mutual interest, while maintaining a diplomatic backchannel.

The cover was finally lifted on Aug. 13, when an agreement to normalize ties was sealed in a phone call between the US President Donald Trump, Israeli Prime Minister Benjamin Netanyahu, and Abu Dhabi’s Crown Prince Sheikh Mohammed Bin Zayed.

The IRENA’s “headquarters agreement”, drafted in 2013 had made it mandatory for the host country to facilitate the members, desiring to send permanent missions to the organization.

In 2015, a delegation from the Israeli Foreign Ministry led by Director-General Dore Gold participated in a meeting of the Council of IRENA under full media glare. Both countries, however, issued statements that this visit does not reflect any change in their positions.

According to Sigurd Neubauer, a former non-resident fellow at the Washington-based Arab Gulf States Institute, the relationship had actually originated in 2006, when American lawmakers attempted to block the UAE state-owned Dubai Port World from managing six US ports, including New York, Newark, Baltimore, and Miami.

“Although the UAE eventually withdrew its bid, Abu Dhabi apparently was taken by surprise by the strong Congressional opposition and subsequently launched a massive public relations campaign to convince Washington policymakers that the UAE was not only a reliable US ally but shared Washington’s strategic interests – which, by extension, included those of Israel, “he wrote in a research paper released by the Slovenia based International Institute for Middle-East and Balkan Studies (IFIMES).

When the UAE submitted the bid to host headquarters of IRENA, it engaged America’s Jewish community, to ensure there is no Congressional opposition after committing that all UN members – a reference to Israel – would be welcome to fully participate.

The support of powerful Jewish lobbies in the US helped India and UAE to ink the 123 Agreement with Washington in 2008 and 2009 respectively. The agreement enables both countries to receive nuclear know-how, materials, and equipment from the US and its allies.

“As part of the agreement, the UAE committed to forgoing domestic uranium enrichment and the reprocessing of spent fuel. Before signing the 123 Agreement, Emirati officials had reportedly also reassured the Israeli defense establishment that their civilian nuclear program would be fully compliant with the International Atomic Energy Agency (IAEA) and that its program would be fully transparent,” said Neubauer, who is also the author of The Gulf Region and Israel: Old Struggles, New Alliances.

In 2009, the Defense News had reported that Israel had granted several GCC states, including the UAE, access to the Israeli-built Eros B satellite and its high-resolution imagery and had begun exporting communication, homeland security, and civilian technology against terrorism.

According to WikiLeaks cable dating to March 2009, Marc Sievers, the political advisor of the US mission in Tel Aviv, mentioned that there was a secret and persistent dialogue between Israel and Gulf countries.

It said that a “good and personal relationship” has developed between then Israeli Foreign Minister Tzipi Livni and UAE Foreign Minister Abdullah Ibn Zayid. However, it added that the two leaders would not “do in public what they say behind closed doors.”

It mentioned that hostility to Israel – which had been a defining feature of the geopolitical landscape of the Middle East since Israel’s creation in 1948 and the expulsion of more than 700,000 Palestinians – is largely fading away.

In 2010, the relations between the two countries strained after the UAE accused Israeli secret agency Mossad of assassinating the Hamas leader Mahmoud al-Mabhouh in a covert operation in Dubai. A year earlier, the same Mossad team had reportedly tried to poison the Hamas leader, who fell mysteriously ill but eventually recovered, and was never aware he had been poisoned by Israeli operatives.

According to Israeli journalist Yossi Melman, who writes on intelligence affairs, an Israeli diplomat Bruce Kashdan was also in the UAE when the incident took place. The issue created a row between the two countries. But the lure of nuclear technology and threat from Iran soon dissolved this anger.

As documented by the Jewish Virtual Library, in the first week of November 2016, Israel’s Ambassador to the UN Danny Danon paid a secret visit to the UAE to attend a conference as chairman of the UN legal committee. His visit was conducted under stringent security measures, to avoid public opposition.

Israeli Hebrew-language newspaper the Yisrael Hayom claimed that Netanyahu had made at least two visits to the UAE over the past two years, accompanied by Meir Ben-Shabbat, chief of Israel’s National Security Council, who had spearheaded the negotiations.

On Dec. 17, 2019, the White House hosted a secret trilateral meeting attended by Israel’s National Security Adviser Meir Ben-Shabbat and UAE Ambassador to the US Yousef al Otaiba in which they discussed cooperation against Iran and draft of a nonaggression pact as a step toward full diplomatic relations.

In 2014 Israeli newspaper Haaretz had spotted a mysterious weekly private flight from Tel Aviv, via Amman, to Dubai, indicating flurry of activities between the two countries.

After the coronavirus pandemic took over the world, Etihad Airways made its first landing at Tel Aviv airport on May 19, 2020, carrying 14 tons of medical supplies for Palestinians.

The Palestinian Authority, however, refused to take the aid because it had come through Israel.

A month later, a second Etihad Airlines plane again brought medical supplies, which prominently displayed the Etihad logo and the UAE flag. It is believed that the supplies were transferred to the UN for distribution in the Gaza Strip.

Ahead of the announcement of full diplomatic relations, Netanyahu had declared that health ministries of both nations would cooperate in research and development in medical projects related to the coronavirus.

Israel Aerospace Industries also signed a cooperation agreement with the Abu Dhabi-based company Group 42 on July 2, 2020, to promote research and development technology in the fight against the pandemic.

The warming relations between Israel and the UAE has helped Jews in the Gulf nation to come out of the shadows.

“After meeting for years in one another’s homes — expatriates in fields such as finance, law, energy, and diamonds — some years ago rented a villa in a quiet residential neighborhood for prayers,” said Ross Kriel, a key leader of the community. Quoting Kriel, the AICE website said the UAE government’s attitude has been that they want the community to feel comfortable doing business and praying.

The UAE is the third Arab country that has come forward to officially normalize ties with Israel, following Jordan and Egypt. Israeli media this week reported that senior Israeli officials were reportedly in advanced talks with Bahrain, which welcomed the UAE’s move, over a similar agreement.

Analysts believe that UAE’s move to come out of the closet and normalize its relations with Tel Aviv publicly without any visible reciprocation came when Israel has taken a hostile attitude towards Palestinians raises a question mark about its motives.

It only suggests increasing vulnerability of Gulf states, who feel that their survival is assured only by coming closer to Washington and its closest ally in the region.

The rules of geopolitics only suggest that the US and Israel will milk and play with their vulnerabilities more frequently in the coming days to promote their interests.