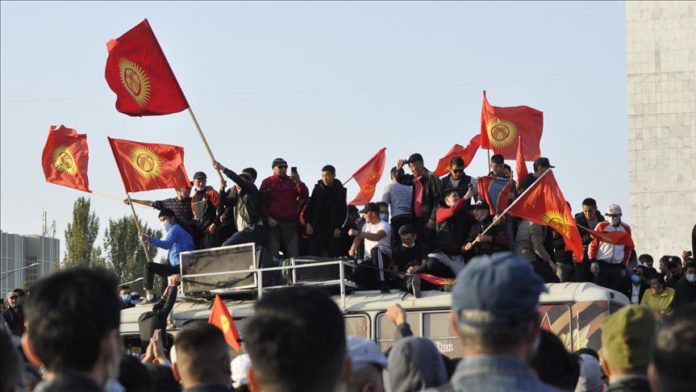 The writer is a UK based analyst and has worked with universities in three Central Asian States.

In fast-paced developments that overtook Central Asian country Kyrgyzstan since parliamentary election results were announced on Oct. 5, President Sooronbai Jeenbekov has offered to resign once a new cabinet is appointed to end the power vacuum.

The chain of events could be explained in many ways, but largely they owed origin to clashes between provinces and clans. The northern elements, sidelined by the south dominated ruling coalition ultimately turned tables and forced the president not only to countermand election results but also made his continuance on the top political post vulnerable.

They were peeved at near no representation in the new parliament, attributing it to the large-scale electoral manipulation.

Bishkek based commentator Alexander Knyazev said it was a typical conflict between provinces and clans. He mentioned that the families of President Jeenbekov, founder of the Birimdik (Unity) party, and Raimbek Matraimov, major financier and most influential figure of the Mekenim Kyrgyzstan party, both belonging to the southern region, had swept the polls.

Their closest allies also secured a few parliamentary seats. Consequently, this enraged clans in the northern part, who found themselves with nearly no representation. They rushed to form a coalition and took to streets.

Matraimov, a former customs officer controls many channels of cargo transiting through the Chinese-Kyrgyz borders. Jeenbekov, who in past was a member of the Social Democratic Party lately formed Birimdik, as he had been trying to come out of the shadows of his mentor former President Almazbek Atambaev.

Therefore, it is safe to conclude that the recent developments in Kyrgyzstan owe their origins to the clash of clans, tribal rivalry as well as business interests. Provincial rivals in this Central Asian nation fiercely compete to grab power to control resources, authority and promote specific interests, while denying others similar benefits through manipulation. It also entails side-lining opponents and arresting those who do not bow out easily, said Russian commentator, Sergei Kozhemyakin.

The disenfranchised and marginalized elements of Kyrgyzstan society were not left with many alternatives as all-powerful posts were distributed among party members of the ruling coalition. This resulted in a situation where 14 out of the total 16 parties were left out of the parliamentary system.

Commentators agree that the key trigger that caused the angry crowds to come out on the streets was the side-lining of northern elements.

As a result, the side-lined elements gathered at the government headquarters and after over four hours of fierce protests, they manage to dismiss and dislodge the ambitions of many newly elected members of parliament, who were aspiring to grab power over the next four years, said Kazakh activist Dosym Satpayev. The angry protesters also successfully pulled the rug beneath the feet of aging politicians.

Media reports showed many protesters complaining that “the same, tired, old political faces who have been in power for long years” keep circulating in election after election. People demanded replacing the aging MPs with fresh, energetic representatives who could serve the interest of the people more effectively.

Another broadcast cited people protesting against widespread injustice witnessed before and during the day of the election. The protesters also demanded that power should not be concentrated in few hands but should be vested in the people and their genuine representatives.

Kyrgyz observer Bakhtyor Ergashev said the inter-clan rivalries aggravated by several other factors have opened the doors for exploitation by groups engaged in organized crimes to exploit the political disturbances.

Observers fear that the ensuing instability may hit infrastructure investments and halt bigger projects. They may also result in delaying the construction of the China-Kyrgyzstan-Uzbekistan railway project.

The evolving situation has soured the dreams of those elements who contested elections and were aspiring to exploit their positions, says Kozhemyakin. He further notes that elections are often used as a cover to legitimize self-serving domination under the facade of democracy.

“Such archaic practices will hardly help in altering conditions for the better. Until social and economic opportunities are ensured for all, the process of election will remain a game for those who possess wealth, authority, and administrative resources,” he said.

There is no simple solution to these ailments, believe analysts.

“Much depends on how the clans can come to terms with each other, i.e. how the Jeenbekov and Matraimov families could come to terms for any give-and-take. They are losing their administrative strength, and for them, the best way out now is to negotiate with those from the north,” said Knyazev from Bishkek.

For the time being, it is the outgoing parliament that is expected to play a significant role to propose a date for the next elections and also to choose a new prime minister and cabinet. The two main questions now are when fresh elections will be held and what will be the composition of the future parliament? The earliest the elections could be held is in the spring of 2021, said Kyrgyz observers.

President Jeenbekov has also expressed his readiness to resign once a new cabinet is appointed.

“After legitimate executive authorities are approved and we are back on the path of lawfulness, I am ready to leave the post of president of the Kyrgyz Republic,” he said in a statement on his website.

One half of the Coalition Council formed of the opposition parties is backing the appointment of Social Democrat leader Sadyr Japarov as the new prime minister. Kyrgyz sources say that his appointment will not be opposed by Jeenbekov and Matraimov if he does not press for pursuing immediate impeachment against the president.

Four other opposition parties are backing businessman Omurbek Babanov, who in 2010 founded the Respublika party and later also served as prime minister. He had also unsuccessfully contested the 2017 presidential elections. Another candidate vying for the post is Sadyr Japarov, backed by elements close to former President Kurmanbek Bakiyev. In 2017, he was convicted of holding a government official against his will.

“The fate of ex-President Almazbek Atambaev is not clear. He may stay in the background aspiring to become an arbitrator and kingmaker in the coming months if he does not oppose Japarov becoming the next prime minister.

“Whoever succeeds in getting nominated for the post of prime minister will access financial and administrative resources to ensure the success of his party in the next elections,” says Kyrgyz political activist Adil Turdukulov.

Moreover, that position will allow the introduction of far-reaching changes in the manner in which parties get registered and contest elections.

Agreeing on a date for the new elections is the second most important task to be sorted by the outgoing parliament. Another task is to decide the fate of the incumbent president, who has offered to resign.

“Though he [president] was popularly elected, yet he has lost some political legitimacy. The situation is in a stalemate. The parliament’s speaker is in contact with him to explore possible alternatives. There is a possibility of either moving impeachment motion or to nudge him to resign voluntarily under guarantees of immunity,” said a political activist.

In the early hours of Friday, Jeenbekov asked political parties to allow the restoration of order within the proper legal framework and sought to use his prerogative to appoint the new prime minister on the recommendation of the outgoing parliament. After completion of these conditions, the president said he is ready to step down.