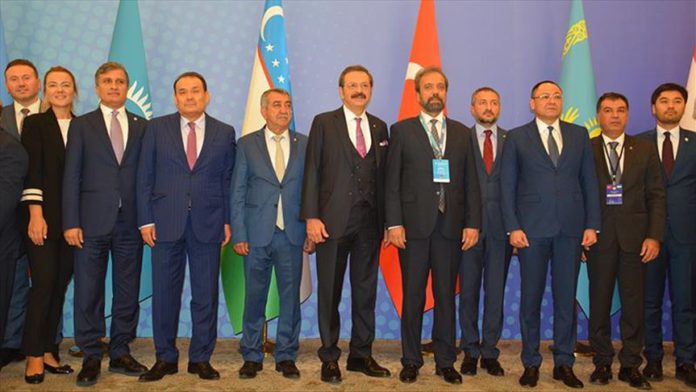 In 1991, the map of the world radically changed. The region once known as the Soviet Union became home to reborn free states. Five distinguished Turkic countries, Azerbaijan, Kazakhstan, Kyrgyzstan, Turkmenistan and Uzbekistan, gained their independence and started to integrate into the world. In this environment, Turkey became one of the main partners of post-Soviet Turkic countries. Besides being one of the first recognizing their independence, Ankara also took on the role of a bridge between the Western and Turkic worlds. The cooperation between the Turkic-speaking countries evolved on a slow but stable course crowned with the Nakhchivan Agreement on Oct. 3, 2009, which laid the fundamentals of the Turkic Council.

Ten years after its foundation, which was celebrated at its seventh summit in Baku last year, the council started to project its power in various areas. Originally founded by Azerbaijan, Kazakhstan, Kyrgyzstan and Turkey, the council extended its full membership to Uzbekistan and even welcomed Hungary, an EU member, to its ranks as an observer country. Thus, the geographic boundary of the council is expanding together with the potential for greater cooperation among its member and observer states.

Based in Istanbul, the organization is taking a firm stance towards international developments concerning its members. Its developing structure emboldened with historical fraternal ties has let it boost its worldwide image by projecting the common voice of its members.

As an example, the Turkic Council supported Turkey’s rightful military operation, Operation Peace Spring, in northern Syria and condemned so-called “Armenian genocide” allegations against Ankara. On a larger scale, the council weighs in on developments in its greater geography as well. It aims to build a strong harmony in the foreign policies of its members and ensure a higher level of mutual support on the global political scene.

The council had also issued other joint statements and declarations on developments concerning Cyprus, Egypt and Ukraine in the past, highlighting its common stance towards regional issues affecting the interests of its members.

Azerbaijan’s term as chair of the organization was notable for its swift action, most notably for the call of the Extraordinary Online Summit on the COVID-19 pandemic on April 10, 2020, with the initiative of the President of Azerbaijan Ilham Aliyev, to discuss the possibilities of cooperation between the member and Observer states which resulted in the adoption of the Baku Declaration, reflecting the will for solidarity and further action. The Turkic Council became the first international body responding to worldwide calls to fight against the pandemic that has held our planet captive.

The extraordinary summit was a great success and resulted in the first practical solidarity — for example in medical equipment aid — in the region with the inclusion of Hungary. Furthermore, the council conducted the first video-conference meetings of ministers of health and health coordination committee, as well as the Health Scientific Group and Supply Chain Group that brought together the relevant officials and scientists of the member and observer states on the pandemic and discussed cooperation, medical aid and the possibility of new opportunities during and after the global health crisis.

As a result of the extraordinary summit, cooperation efforts among the Turkic Council countries gained new momentum also in the areas of transportation, economy, trade, customs and migration. Transport ministers agreed on coordinating the uninterrupted flow of food, medical products and humanitarian aid to maintain supply chains, including the launch of a “green corridor” — an international fast-track transport line for essential goods.

The greater purpose of the crisis meetings on the level of ministers and high-level officials was to coordinate the continuation of supply chains and trade between member states despite the COVID-19 pandemic.

Raising the council’s common voice to show the solidarity among its members was also vital against illegal activities in the occupied territories of Azerbaijan. The council released a common condemnation of the so-called “presidential and parliamentary elections” in the Armenian-occupied Nagorno-Karabakh on March 31, 2020.

The Turkic Council reaffirmed once again its commitments to the norms and principles of international law and reiterated the importance of the early settlement of the Armenia-Azerbaijan conflict on Nagorno-Karabakh, based on sovereignty, territorial integrity and the inviolability of the internationally recognized borders of the Republic of Azerbaijan. In this context, the Secretary-General of the Turkic Council, Baghdad Amreyev, strongly condemned and criticized Armenia’s attack on the Azerbaijani border territory of Tovuz on July 12-14, 2020, a densely populated area that is home to civilians. He urged an immediate end to the fighting and called on the parties to de-escalate the situation and continue to seek ways to resolve the conflict peacefully on the basis of generally accepted principles and norms of international law and the related resolutions of the UN Security Council adopted in 1993. The clear stance of the council on the Tovuz clashes showed that the organization was fast and constructive in responding to regional developments.

The unity in the decision-making process in the Turkic Council was held in high regard by President Ilham Aliyev as a great asset in one of his recent speeches. President Aliyev stated that despite the premier of Armenia, Nikol Pashinyan, seeking help from the Collective Security Treaty Organization (CSTO) after the Tovuz clashes, Kazakhstan and Kyrgyzstan, members of both CSTO and Turkic Council, stood beside Azerbaijan. It showed that the potential of the Turkic Council and organic bonds based on shared values and culture between its members can be superior to the bonds between the members of the CSTO.

Therefore, the common declarations made by the council hold strategic importance to understand the position of the member states in various strategic issues, such as security and political affairs.

These examples of responses to both security and public health threats in 2020 show the Turkic world’s joint approach to global crises and fast response to international calls. The increasing need for a united voice and regional solidarity to stand against the common threats strengthen the role of the council as a major contributor to global peace and stability. Furthermore, the organization is preparing to increase its geographic scope and fully integrate post-Soviet Central Asian Turkic countries under its umbrella which can make it a “kingmaker” in regional politics. Also, as mentioned, the Turkic Council derives its main power from the organic bonds between its participating countries, which allow the organization to build values based on the shared history and mutual trust, rather than the purely political interests.

[The author is an assistant researcher at the TRT World Research Centre. He holds a degree in history and politics from Queen Mary University of London and a master of arts in transnational studies from University College London]

Over 300 schoolgirls abducted in Nigeria