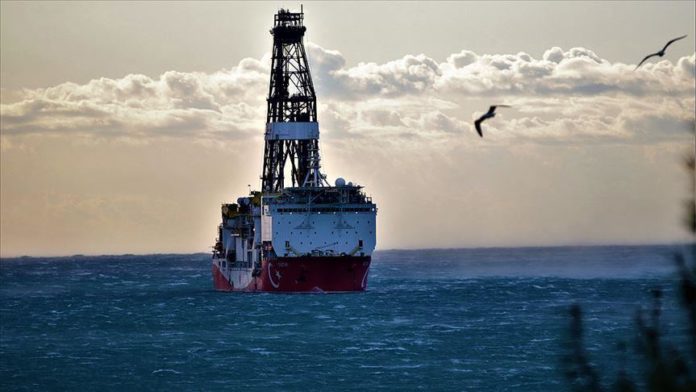 Turkey continues to insist on dialogue to resolve the Eastern Mediterranean issue, despite all the instigations by Greece, the Greek Cypriot Administration, and France.

For the first time in the Eastern Mediterranean, tensions began when the Greek Cypriot side entered into the international agreements to operate the natural wealth around the island, ignoring the legal and legitimate rights of the Turkish side in the north.

The western companies, with the support of their governments, are engaged in natural gas exploration and drilling in a wide area with the Greeks.

For years, warnings by Turkey and the Turkish Republic of Northern Cyprus (TRNC) that the wealth around the island should be reserved to benefit all the people by bringing a just and permanent solution to the Cyprus problem were ignored by their interlocutors.

When large hydrocarbon fields in the Eastern Mediterranean were discovered, countries in the region that wanted to operate these riches brought up the exclusive economic zone (EEZ) agreements.

Despite warnings from Turkey and the TRNC against the Greek Cypriot Administration, continued signing so called EEZ agreements with Egypt in 2003, Lebanon in 2007, and Israel in 2010.

The Greek government continued to explore hydrocarbons, coinciding with the work of western companies in areas owned by Turkey and the TRNC.

Egypt, Greece, the Greek Cypriot Administration, and Israel have tried to eliminate actors such as Turkey, Libya, and Lebanon through the Eastern Mediterranean Gas Forum they have created in Cairo.

In a bona fide opening, the TRNC and Turkey proposed the establishment of a joint committee on hydrocarbon resources to the Greek Cypriot side through the UN. In this way, a new formula for the smooth operation of resources within the framework of mutual reconciliation was hoped to be drafted, until a fair and permanent solution was found to the Cypress issue.

Greece not responding to peace

In contrast, the Greek administration, having the support of the EU behind it, has not shown any inclination towards any kind of cooperation.

Turkey, which has the longest coast in the Eastern Mediterranean, and which has become a battleground for many countries, has put its diplomatic and military tools into more intensive use after years of being ignored in terms of its calls for a dialogue.

The country has initiated seismic research activities in the west, east, and south of the island of Cyprus within the framework of agreements reached with the TRNC.

Turkey has given a much stronger message to the Greek-Rum duo and the western companies that they cannot confiscate the wealth of the island through unilateral actions, and that the issue should be resolved by the parties at the table. President Recep Tayyip Erdogan and other state officials have called for negotiations for the “right-sharing” in the Eastern Mediterranean.

Athens and the Greek Cypriot side have shown that their intentions are greater, with a plan that combines maritime jurisdictions.

By claiming the rights on the land, waters, islands, and islets in the Aegean Sea, Greece wanted to combine its sovereignty with the so-called jurisdiction of the Greeks, who acted as if they were the sole owner of the island of Cyprus.

According to the Greek dreams determined by the “Map of Seville”, Turkey would be imprisoned in the Gulf of Antalya.

The maximalist demands of Greece led Turkey to intervene and disrupt the plan.

Turkey responded to the developments behind the Greek-Rum duo by taking the EU and the giant energy companies of the world by entering into an EEZ agreement with Libya.

Turkey has broken the great wall that the Greek-Rum duo wanted to draw in front of the Anatolian peninsula by combining its maritime jurisdiction with that of Libya.

In contrast, France, which supports, Khalifa Belqasim Haftar the leader of the illegal armed forces in eastern Libya, is strengthening an anti-Turkey alliance with the Greek-Rum duo. It encouraged Greece to go after Turkey. It directed Athens to make military threats against Ankara.

After many years, Turkey, like many countries in the world, concentrated its work on hydrocarbon resources in the “Blue Homeland”, which is considered an integral part of the country.

The Oruc Reis seismic survey ship has set its course under the Navtex announced on July 21.

Indignation took place in Greece, as the research site was expected to be near the islands of Meis and Rhodes.

German Chancellor Angela Merkel has asked for reconciliation while decrying the activities of Turkey.

Turkey is facing a situation that has shattered a climate of goodwill as the Berlin awaits the results of its contacts with the Greek officials.

On Aug. 13, the Greek frigate Limnos, which had moved to harass Oruc Reis, was blocked by the frigate Kemal Reis.

This event showed how natural it is for Turkey to secure seismic research activities in the Eastern Mediterranean using military prowess.

Greece also announced a joint military exercise with France in the Eastern Mediterranean on the day of the conflict.

Ankara pointed out that Turkey’s presence in the Eastern Mediterranean with its navy is not to start a military conflict.

Turkish Defense Minister Hulusi Akar spelled out that goal is to safeguard the country’s legitimate economic interests by conducting drilling and research in the Eastern Mediterranean. He stressed that the military presence is aimed at ensuring the security of these activities.

“What we are doing here is just drilling and research,” Akar told Anadolu Agency editorial desk.

“We are not fighting any kind of war. We are doing our work there in the field that belongs to us. We are completely using peaceful ways and methods within the framework of our rights, relevance, and interests,” he said.

Turkey has shown that it is pursuing legitimate economic interests in the Eastern Mediterranean by announcing that the activities of the Yavuz drilling ship will continue.

Cavusoglu emphasized “solution through dialogue” and a “bona fide approach to decoupling initiatives” and “fair sharing”.

“We are in favor of sitting around the table with everyone on the issue of Eastern Mediterranean to negotiate a fair share, “he said.

On the other hand, Turkey’s peace overtures are responded with the messages of military might.

After the joint exercise by Greece, the Greek Cypriot Administration, Italy, and France in the south of Cyprus from Aug. 26-28, there are claims that France has started sending aircraft carriers and other naval elements to the region.

Turkey’s line so far has been to keep the channels of dialogue open and to prevent the tension from getting out of control, even at times when tempers are running high.

While Ankara has given priority to finding solutions at the table, it has continued to consistently deliver the message that it will not back away from mobilizing its military capabilities to the extent necessary at the moment.

As a result, it seems that Turkey is primarily ready for dialogue to evolve a fair sharing formula. But at the same time, it does not shy away from the military challenges.

*Translated by Merve Dastan in Ankara