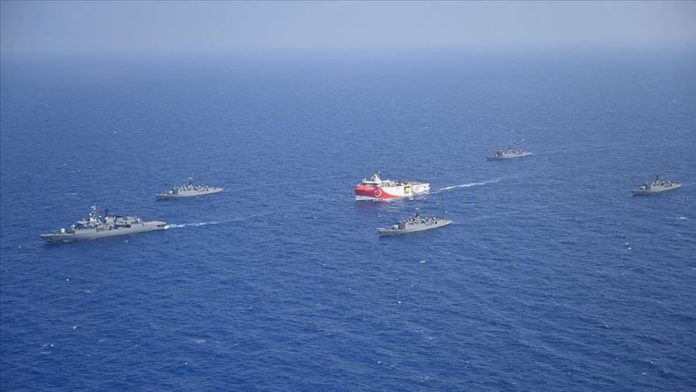 “Turkey’s file will be the main agenda item of the European Council meeting, which will be held at the end of this month. As foreign ministers, we prepared this file in Berlin a few days ago. The file contains a series of sanctions that could be brought into force against Turkey.”

As the Memorandum of Understanding (MoU) on the delimitation of the maritime jurisdiction areas signed between Turkey and Libya on Nov. 27, 2019, altered the balance in the Mediterranean, it gave rise to a military alliance under the pretext of searching for a diplomatic solution against Turkey. It would be a mistake just to observe 2019 and 2020 to try to understand the dimension and content of this alliance. Going back to 2013, we first need to take a look at the EastMed pipeline project, which was started to ensure the welfare of Europe and is now supported by the US and France in the Mediterranean, which has turned into an anti-Turkey military alliance.

The first participants of the project, initiated with the support of the European Commission, were Israel and the Greek Cypriot Administration. Egypt, which has become the platform of anti-Turkish politics in the Middle East, is also integrated into this structure. The disputes on sharing the hydrocarbon resources around Cyprus Island and transporting them to Europe have evolved into a military dimension from energy rivalry depending on the developments in Libya over the last year. The loss of validity of the EastMed pipeline project due to the slowdown in the global economy in the last quarter of 2019 and the negative impact of the new type of coronavirus pandemic on industrial production, which reduced energy demand, strangely did not prevent the crisis from gaining momentum. On the contrary, Italy, Palestine and Jordan were included in the alliance, which was reshaped under the name of the “EastMed Gas Forum” in January 2020. France and the US also applied for membership. The initiative of France and the US to join the alliance was the most important step that affected the disagreement evolving from an energy rivalry and gaining a military dimension.

After nine months, today we are talking of France’s sale of Rafale jets to Greece, which will provide relative superiority against Turkey in a possible conflict, and the arms embargo on Southern Cyprus lifted by the US after 33 years. The meeting, which will be held on Sept. 10 between French President Emmanuel Macron and Greek Prime Minister Kyriakos Mitsotakis, will give a clearer perspective on the size of the siege plans towards Turkey. During this visit, an agreement is expected to be signed on the deployment of French soldiers to Western Thrace after the US [soldiers] and joint military exercises, besides France’s sale of fighter jets to Greece.

Greece sold €2.5 billion (US$2.9 billion) worth of bonds to international markets on Sept. 2, without waiting for Macron’s arrival to finance the fighter jets to be purchased from France. It is not difficult to guess the addresses of the buyers of these bonds, considering that the armament programs of Egypt, Greece and Southern Cyprus are indirectly financed by the United Arab Emirates (UAE) and Saudi Arabia. While this picture brings the United Nations’ silence to this alliance, which is becoming increasingly aggressive in the Eastern Mediterranean, it also makes it easy for Athens to reject without any reasons NATO Secretary-General Jens Stoltenberg’s efforts to start a dialogue between Turkey and Greece.

It is possible to detect under the current circumstances what financial and military resources Greece trusts and avoids dialogue, even using some European publications to try to show Turkey as a side always ready to attack by following the trail of money and arms trade [Greece]. While trying to understand why Greece’s shunning dialogue, it is also beneficial to examine NATO’s changing identity, which is like a secret that everyone knows but no one can express.

Is Turkey being kept out while NATO is transforming?

While emphasizing the importance of the NATO alliance in resolving the conflict in Libya and the Eastern Mediterranean, Turkey is exposed to the aggressive attitudes and accusations of the members of the alliance itself. Athens can evade without any concrete response the calls for dialogue of the NATO secretary-general. Has there been a change in NATO’s paradigm, built in line with Cold War-era needs, without informing some of its members? Perhaps it is necessary to consider the answer to this question to understand the course of events in the Eastern Mediterranean.

The US decision to reduce its troops in Germany — on the excuse that Berlin does not contribute enough to the defense of NATO — can give an idea about the direction of the alliance. While the US directed its air force elements in Germany to Italy against the increasing Russian air threat in North Africa and the Mediterranean centered in Libya, it dispatched its armored units and infantry to Poland and the Baltic countries.

In the meantime, it is necessary to note the US military deployment in Alexandroupoli (Dedeagac), Greece. In Central Europe, a new military settlement is being formed against Russia, centered in Poland. US B-52 Stratofortress bombers fly over the area bordering Crimea, annexed by Russia and Ukraine, as well as the Black Sea. The UK is the closest partner of the US in this new settlement organized against Russia. Meanwhile, it is observed that the Mediterranean, Lebanon and even Iraq (in parallel with the withdrawal of US troops) were left to French influence.

France has made Lebanon a gateway to the Middle East by using an “industrial accident” that occurred in the capital Beirut on Aug. 4 (we can only describe it as an “industrial accident,” since there is no evidence to the contrary yet). Going beyond providing humanitarian aid to Lebanon to heal the wounds of this accident, France was situated in a position that would radically change the political and financial structure of this country and eliminate Iranian influence in Lebanon. At the same time, it included the Greek Cypriot adm., which it sought to include in NATO but failed, into a military alliance under the name of energy cooperation.

While the US and France seem to have shared their spheres of influence in this way, another move was made to bring this new structure built against Iran and Russia’s threats to the Gulf region. It is not possible to think that the step taken to establish diplomatic relations between the UAE and Israel announced by US President Donald Trump is a decision designed outside the chain of alliances. As will be remembered, in December 2019, at the NATO Leaders Summit in London, it was claimed that the alliance’s intervention against China was on the agenda. In this perspective, it seems probable that some of the leading countries of NATO, which seem to be oriented towards forming regional alliances with countries with which it cooperates, other than its members, are taking the navies of the Philippines, Canada and Australia with them to knock at South China Sea’s door.

While the NATO headquarters in Brussels is becoming an umbrella organization in this transformation, it is understood that the US, UK and France are turning to different structures in their global interests under the NATO flag. The question of where Turkey’s place is, needs to be answered to solve the puzzle in the Mediterranean in this transformation that is apparently above government politics.

Could the 1919 paradigm repeat?

History has witnessed many attempts to destabilize the political power that dominates Asia Minor (Anatolia, Syria, Lebanon and the Nile Delta) by the European-centered power groups. To remember the ones that concern Turkey most out of these initiatives, the burning of the Ottoman navy in Cesme by the Tsardom of Russia, came from St. Petersburg in 1770, —concordantly provoking the Greeks for independence in the Morea peninsula, changing the balances in the Mediterranean via Muhammad Ali Pasha, centered in Egypt in 1832, and aim of the attempt to completing a chain of Ottoman-Greek conflicts in the 19th century by the Greek soldiers who stepped foot in Izmir in 1919.

The UK’s military support was not enough to make the paradigm established in 1919 successful. Today, we are watching a theater that tried to repeat this paradigm of potential conflicts by adding new ones to between Turkey and Greece. It is now obvious that the goal of the theater, directed by France and performed by the EU, Germany and members of the EastMed Gas Forum, is to make Turkey the offensive side by involving Turkey in a conflict. Despite threats of sanctions and military pressure, Turkey’s determination to pursue diplomacy and dialogue will prove that dreaming of repeating “Paradigm 1919” is a dead end. The power groups, led by France, who are trying to implement this paradigm, should calculate well what will be the cost of creating a new zone of instability in the region while the economic and political crises in Lebanon and Iraq continue and the conflicts in Syria and Libya continue. Putting Greek citizens themselves at risk and taking a risk for the sake of Macron, who has no hope for re-election in 2020, will have costs that cannot be covered by the money of government bonds sold by the Mitsotakis government in Greece.