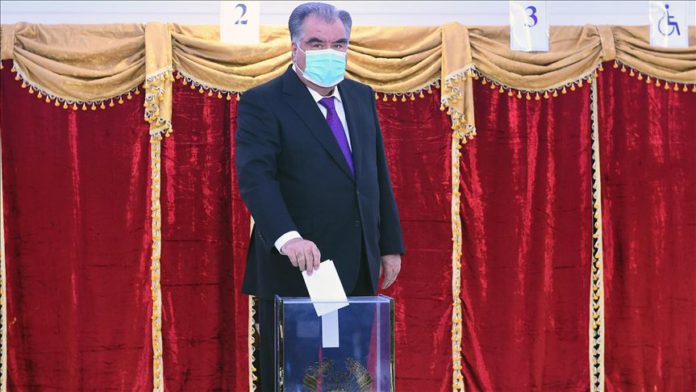 In Tajikistan President Emomali Rahmon, 68, was re-elected for another seven-year term, securing 90.92% votes in the nationwide polls held on Sunday. He ha been ruling the Central Asian nation bordering Afghanistan, China, Kyrgyzstan and Uzbekistan continuously since 1992.

While the outcome has been hailed as reflecting that people have voted for the status quo, critics say, many genuine contestants were sidelined and not allowed to contest. When people walked to polling booths on Sunday, they saw four other names also as candidates.

But none of them was any known face or a political heavyweight. Their inclusion was aimed at to lend genuineness and credibility to the polling exercise.

Political analysts say that President Rahmon has sought a fifth consecutive term to allow more time to his son Rustam, 32, to step into his shoes to control levers of the government. His daughter Ozoda, 40, has already been managing the presidential office since 2016.

A transition at this time could have been risky, due to deteriorating economy and declining social parameters. The president’s elder son, Rustam, was appointed as speaker of the Senate in April 2020. He had been serving as the mayor of capital Dushanbe, earlier since January 2017.

An amendment was incorporated in the constitution to lower age limit from 35 to 30 years to allow him to contest in the 2020 presidential elections as per the initial plan. But due to a host of factors coupled with COVID-19 pandemic hitting the economy, the plan was shelved.

An expert on Central Asian Studies, Andrei Kazantsev said that Tajikistan receives sizeable remittances from immigrants working in Russia. It is also hosting sizable Chinese investments. The epidemic has left a considerable dent on these sources.

In Russia, many Tajik immigrants have lost their jobs, and those who still working are struggling to send money back home. Further, with China also more focused on internal issues, off late little investment is coming to its neighboring states.

In 2019, Tajik diaspora in Russia sent $ 2.5 billion remittances making up 35% of the country’s GDP. But in the first half of this year, the volume of transfers has decreased by 40%.

In the summer, Tajik authorities slashed budget expenditures, reduced investment in the energy sector, while at the same time they attempted to increase exports of precious stones and metals, writes Moscow based Izvestia newspaper.

Because of the havoc wrecked by COVID-19, not only people at home are losing their jobs but migrants are also returning from Russia, adding more unemployed people in the population, which may appear enough ammunition to the opposition.

But Andrei Grozin, an expert in the region said while it is true that people are disgruntled, it will not transform into strong protests like in neighboring Kyrgyzstan.

Tajikistan has a completely distinct political system and even though President Rahmon has been ruling as a hardliner for over a long time, nobody also wants to sink the country into chaos, which is the only other dreaded alternative, maintains noted political scientist Azhdar Kurtov.

So far there is no competitor to the president, who could pose a serious challenge to his authority.

“New amendments brought to the constitution allow him to run for an unlimited term. He faces no real candidates in the elections, as there is no viable opposition on the political scene which has been carefully sterilized long ago,” said Irina Jorbenadze.

Grozin lists three factors which possibly do not allow any shakeup in the system. They are the loyalty of the security officials to Rahmon, absence of an alternate leader and more so, elites lacking any desire to oppose the status quo.

There is also an apprehension that the government will use reprehensive measures in case of protests, as law enforcement agencies are still empowered with special powers, given to them to tackle the 1992-1997 civil war.

The new presidential term from 2020-2027 may witness Rahmon along with his eldest son and daughter completing a power troika. The arrangement may lay a smooth path for Rustam to take over as next president once the economy is back on track and the uncertainties thrown by the pandemic come to an end.