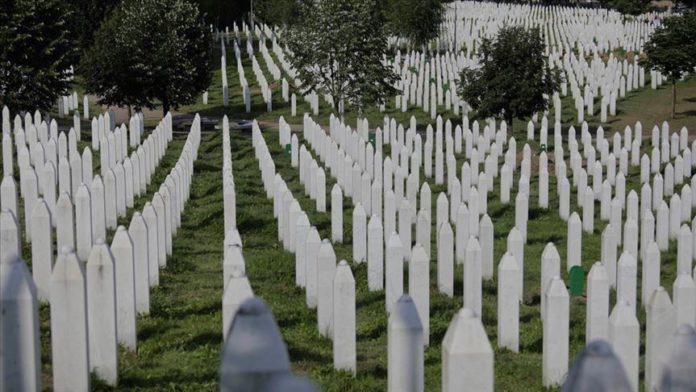 It has been 25 years since the Srebrenica genocide, a major human tragedy, in which Bosnian Serb forces systematically murdered over eight thousand young and adult Muslim men because of their faith.

The Srebrenica genocide, which took place on July 11, 1995, constituting one of the darkest pages of human history, was prosecuted by two international courts. It is described as the most severe incident in European history since the Second World War.

In the years leading up to the break-up of Yugoslavia, ultra-nationalist rhetoric spread, primarily among Bosnian Serbs. When the conflict erupted in the early 1990s, the population of Bosnia and Herzegovina was already exposed to bigotry and hatred.

In 1995, Bosnian Serb troops were under the command of General Ratko Mladic. Supported by paramilitary units from neighboring Serbia, Mladic attacked Srebrenica.

The population of the city, which was around 24 thousand before the war, reached about 60 thousand after refugees flocked in from other regions. Srebrenica had turned into an open concentration camp faced with never-ending fear, hunger and diseases.

Despite the atrocities and massacres playing out across Bosnia, the UN Security Council, which was only able to ban the sale of arms in 1991, could not play an effective role in this period.

On the other hand, the United States, Britain and France remained rather indifferent to the situation. In the meantime, Germany actively supporting Croatia and Slovenia while ignoring the developments in Bosnia and Herzegovina further encouraged the Serbian army.

Consequently, when the Serbs under the command of Ratko Mladic intensified their attacks on Srebrenica, the weapons embargo had only served to prevent Bosnian Muslims from arming themselves. Moreover, the light weaponry in the hands of Muslims in Srebrenica was collected by the UN Peacekeepers.

The calls made by the Muslims to reclaim their collected weapons to defend themselves were rejected by the UN-appointed Dutch commander Thom Karremans.

On July 11, 1995, Karremans handed over Srebrenica to the Bosnian Serbs, leaving the entire population of civilians that had taken refuge in a UN-designated “safe haven” to face their fates. Subsequently, the Bosnian Serb forces went on to capture 10,000 people and began to kill the prisoners on the orders of Mladic.

A total of 8,372 boys and men were killed in the massacre, which lasted for five days.

Bosnian Serb Ratko Mladic, who led the massacre, stated on the eve of a Serbian holiday that he gifted this city to the Serbian nation. He also said: “Finally, it is time to take revenge on the Turks in these lands.” Referring to Bosnian Muslims — or Bosniaks — as “Turks” is a rhetorical ploy to marginalize and demonize them.

Since Bosniaks are also a Slavic people, the Bosnian Serb genocide planners could not use the ethnic card. However, since the Bosnians chose Islam as their religion in the 15th century, ultra-nationalist fanatics, such as General Mladic and Slobodan Milosevic, labelled them as “Turks”.

In their eyes, Bosnian Muslims had betrayed their fellow countrymen by converting to Islam. The “Turk” metaphorically meant Muslim in the Balkans because of the long Ottoman rule across the region in the past. Thus, religious hatred underpinned the warmongering in Bosnia and Herzegovina. When Bosnian Serb militias began to massacre Bosniaks, they did so on the conviction that they were having revenge on “Turks”.

Alas, Bosnia apparently was only a microcosm of the Muslims’ situation in Europe, which seems to have failed to take lessons from this heartrending experience. Nowadays, Muslims face all kinds of religious hatred and discrimination in various parts of Europe. The growing anti-Muslim bigotry towards the Muslim population in Europe is alarming.

Incidents such as physical attacks on veiled Muslim women, hate crimes, and acts of vandalism against mosques are on the rise. Last year, a total of 871 attacks aimed at Muslims or their institutions took place in Germany.

Far-right extremists and ultra-nationalists in Europe target Muslims as the “new enemy”. As different as the situation in the individual European countries may be, there is a core that connects all right-wing populists: anti-Muslim hatred. These radical views have become frighteningly widespread in the overall European society. Far-right terrorist attacks have increased by 320 per-cent over the last five years throughout Europe.

Like in Srebrenica, most European countries turn a blind eye to these anti-Muslim acts of prejudice, just like they did 25 years ago when a genocide was taking place in the heart of Europe.

What is more, far-right parties built around Islamophobia have been mainstreamed, and their politics of hate have fed into the rhetoric and policies of center parties across Europe.

Srebrenica genocide should be a lesson before too late

There is no doubt that the massacres across Bosnia and Herzegovina, as well as the Srebrenica genocide, could have been prevented had European countries acted swiftly and decisively in order to wield their influence to stymie religious hatred and ultra-nationalism in the Balkans.

If the EU wants to ensure that such horrendous crimes never happen again in Europe, it must confront all forms of xenophobia, including anti-Muslim hatred. There is still a chance to act before it is too late.

The writer is a deputy researcher at the TRT World Research Centre. He is currently a PhD student at Istanbul University in political science and international relations. His primary area of research is European and UK politics.

October 29, 2020
We use cookies to ensure that we give you the best experience on our website. If you continue to use this site we will assume that you are happy with it.Ok