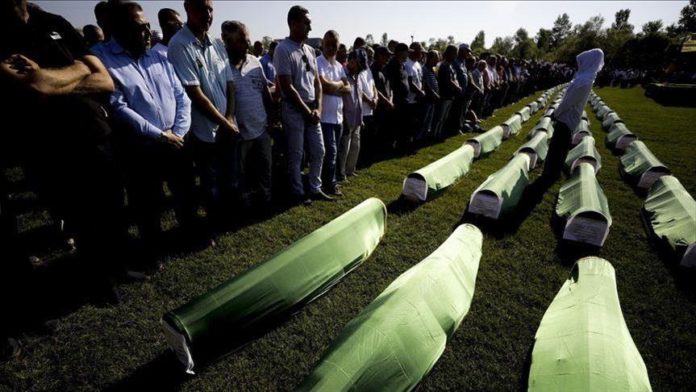 Apart from the initial attempt by the joint forces of the Yugoslav National Army (JNA) and the Bosnian Serb forces, in May and June 1992, there were only a few actual attempts by the Serb forces aimed at capturing the city. The rest of it was all terror. It involved a sniping campaign that extended to children as “legitimate” targets. It also involved deliberate targeting of a maternity hospital; babies no older than few days were targeted. The siege centered on a campaign of terror aimed at civilians, which was long, systematic, deliberate, and grueling. That much we know.

On 7 February 2019, the Bosnian Serb government, under the chairmanship of Radovan Viskovic, established two commissions: one to “research” the events which took place in Srebrenica between 1992 and 1995, and the other to serve a similar function in respect of the siege of Sarajevo. The decision marked the culmination of a fifteen-year effort on the part of various governments in the Serb-dominated part of Bosnia to undermine, deny, and misrepresent the facts established beyond a reasonable doubt by the ICTY. The sole purpose of this enterprise was, and remains, to produce a competitive and counterfactual narrative of the crimes committed against Bosniaks in Sarajevo and Srebrenica. This Tuesday, the commission on Sarajevo –which formally goes as “Independent International Commission of Inquiry on Sufferings of Serbs in Sarajevo between 1991 and 1995”– released its 1250-page report.

The content of the report is really no more than a collection of the basest Serb nationalist propaganda talking points. Expectedly enough, the historical part of the report begins with a review of the Ottoman rule of the region. It then veers into a chapter about group psychology followed by one on unhealed trauma. From there, it turns to –once again, predictably– “the role of radical Islam”, trying to weave the Islamist strand into a narrative about Bosniaks as Nazi collaborators in WWII. Five hundred pages later, the report deals with the siege of Sarajevo. The key and most ludicrous argument of the report is that the siege, which, in reality, was carefully prepared for months before –also including arming literally thousands, if not tens of thousands, of ordinary Serbs living in the capital–, was instead a spontaneous development resulting from a failed putsch by what was legal, legitimate and internationally recognized government.

Let’s be clear about it: the siege of Sarajevo itself was a criminal enterprise. The city was never meant to be taken by the Serb political and military leadership. The Bosnian Serb military was not really a military: it was more of a civilian-grinding machine. Finally, one of the declared “war goals” of the Bosnian Serbs was the division of Sarajevo. In October 1991, months before the start of the siege, in a conversation with the Serbian poet Gojko Đogo, the Bosnian Serb leader, Radovan Karadzic, himself said: “They must know that there are 20,000 armed Serbs around Sarajevo, man. This is not normal, they will, they will disappear! Sarajevo will be a cauldron in which 300,000 Muslims will die.” Perhaps we should take him at his word for once.

The daily death toll on the population of Sarajevo was geared towards creating “an unbearable situation of total insecurity with no hope of further survival or life for the inhabitants.” By breaking Sarajevo, Slobodan Milosevic and Radovan Karadzic planned to break all of Bosnia.

The essence of the report is a very basic argument that underpins the dominant Serb nationalist view of the butchery of Bosnia. It is that Bosniaks had no right to self-defense and that any and every action on their part in that regard was and is by itself “criminal”.

The siege of Sarajevo remains one of the most glaring examples of the destructive power of the Serb nationalist project of regional hegemony, dating back to the very beginnings of the Serb state in the Balkans. The report that was paid for by the taxpayers’ money aims at whitewashing that project, “civilizing” and normalizing it. It also plays to the resurgent far-right in Europe as well as farther afield and comes at a time when ideas about a “peaceful division” of Bosnia and Herzegovina are being floated in some corners of the EU. The circumstances seem to echo the 1990s.

In the final analysis, the report by “Independent International Commission of Inquiry on Sufferings of Serbs in Sarajevo between 1991 and 1995” is no more than the continuation of the siege by peaceful means. Now, the narrative itself is under siege. It is the truth that is being terrorized and aimed at being killed.

FETO terror member to serve over 8 years in jail