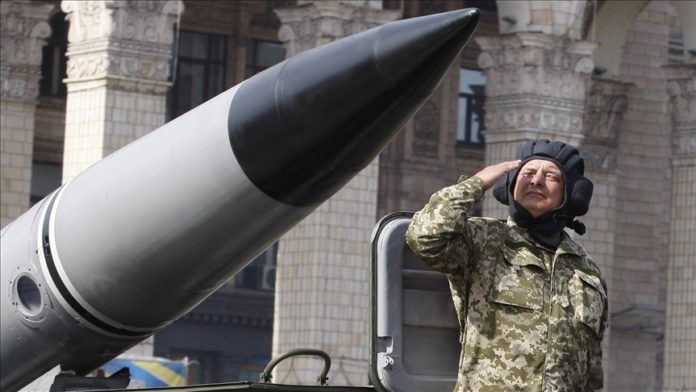 – The writer is a senior journalist at Anadolu Agency.

The diplomatic predicament and a warlike buildup between the US-led West and Russia over Ukraine have almost all the elements taken out straight from the 1962 Cuban Missile Crisis, with the roles reversed. The history is not only being repeated in the Eurasian region, but identical events are happening far away in South Asia as well, taking cover of the preoccupation of the West.

Sixty years ago, the US and the erstwhile superpower Soviet Union now represented by Russia came to the brink of war, when an expert photo interpreter in a meeting called by US President John F. Kennedy at his White House office identified a black and white picture taken to form a U-2 aircraft on a spy mission over Cuba as a Soviet R-12 intermediate-range ballistic missile, designed to carry a nuclear warhead.

For a moment a pin drop silence descended at the high-level meeting. But as the details revealed later, soon the room was full of astonishing curses, and fingers were pointed towards CIA Director John McCone. Everybody wanted to know how the Soviets transported such a huge cache of missiles from the Black Sea to the Mediterranean Sea and then crossed the Atlantic Ocean in such super secrecy?

According to a series of documents now declassified by US authorities, the CIA’s Miami office had been receiving intelligence for over some time. But officials dismissed them as dubious and even laughable, until agents in August 1962 reported that large trucks were passing through Cuban towns at night. It was revealed that they were carrying canvas-covered cylindrical objects that could not make turns through roads without backing up and maneuvering.

Since the CIA had egg on its face due to the failure of the Bay of Pigs Invasion a year earlier, it decided to act cautiously. It had tried to land Cuban exiles opposed to Fidel Castro on the southwestern coast of Cuba in 1961 at the height of the Cold War. McCone also left on a honeymoon trip in late August.

Therefore, objects being carried on Cuban trucks remained a guess until next two months, when the photo interpreter in a presentation to Kennedy and his team identified a new road leading to a large open field 32 kilometers (20 miles) inland from the port of Mariel in the Artemisa Province of Cuba.

Pointing his fingers to a group of shapes that looked like planks of wood in a row, he in an assertive tone declared that they were nothing but Soviet missiles with a range of 1,609 km (1,000 mi) and could hit Washington in less than 13 minutes.

On Oct. 22, Kennedy delivered a televised address announcing the discovery of the missiles. He said: “It shall be the policy of this nation to regard any nuclear missile launched from Cuba against any nation in the Western Hemisphere as an attack by the Soviet Union on the US, requiring a full retaliatory response upon the Soviet Union.”

He also announced the naval quarantine of Cuba, effectively blocking any ship to sail on Cuban ports without scrutiny.

It later came out that these missiles had been boarded into the ships at Sevastopol – the largest city in Crimea and a major port on the Black Sea. And a year earlier Soviet intelligence had swooped in the region arresting almost all those, looking as dissidents, poets, priests, painters of body_abstract art, and even Jews who wanted to go to Israel in the hunt for the CIA ground assets to plug any leakage. The captains of the ships were supposed to sail for Siberia. They were given a sealed envelope that they were supposed to open in the Mediterranean after crossing the Black Sea to know that their destination is Cuba.

In what looks like a replay of those events in 2022, the White House is threatening decisive economic measures against Moscow and even sanctioning Russian President Vladimir Putin. In the game of nerves, Putin is unequivocally telling the West that Ukraine would not be allowed to join NATO and that this position was not negotiable. He is demanding written guarantees that Ukraine will not be invited to join NATO and that Kyiv’s NATO membership would be a red line for Moscow. He also demanded that the US should not place offensive weapons in Ukraine which could erode strategic stability in Eastern Europe or threaten Russia’s domination in the region.

According to K. P. Nayar, an Indian strategic analyst based in New Delhi and Washington, the US readiness so far to listen to Moscow’s concerns about NATO expansion is similar to then-Soviet leader Nikita Khrushchev’s willingness to take into account Kennedy’s fears about Moscow’s missile deployment in Cuba.

“Khrushchev’s decision to take the missiles away from Castro’s hands and ship them back home ended a threat of nuclear war and consequent mutual destruction,” he said.

Will history repeat itself after nearly six decades? The Cuban Missile Crisis ended when Kennedy, in response to Khrushchev’s offer, agreed to remove missiles placed in Turkiye and in southern Italy, which targeted Soviet territory.

Russia has asked for the removal of NATO offensive weapons and personnel from Ukraine and the cessation of military activities in Eastern Europe, the Southern Caucasus, and Central Asia. Like Cuba in 1962, is Ukraine now turning into a chessboard for superpowers?

US Secretary of State Antony Blinken said on Wednesday that a written document was delivered to Russia that includes the concerns of the US and its allies about actions that undermine security.

The crises are being watched closely thousands of miles away in South Asia, where Indian and Chinese forces have been facing each other on the disputed border since 2020. It needs to be recalled that taking advantage of the occupation of superpowers in the Cuban Missile issue, China launched military action against India on Oct. 20, 1962, after the failure of a series of diplomatic talks. The 3,225-km (2,004-mile) Himalayan border became a war theater till Nov. 20, 1962, with India losing about 43,000 square km (16,600 square mi) of land in Aksai Chin.

Alarmed at Chinese assertiveness, India launched its forward policy in 1961 to create outposts behind advancing Chinese troops to cut their supplies to force them to retreat to the north. They believed that China would engage in small skirmishes as it was not in a position to wage a full-fledged war. But as superpowers were busy settling their issues, China launched simultaneous attacks on Indian posts in Arunachal Pradesh and Ladakh, and captured the Chip Chap valley in the western sector and territories beyond the Namka Chu River in the eastern sector.

British author Neville Maxwell, who has written extensively on this war, claimed that the Indian role in international affairs after the border war was greatly reduced and its standing in the non-aligned movement also suffered. India has continued to keep the Hendersen-Brooks-Bhagat Report a top secret. Soon after the war, India appointed a committee, comprising Lt. Gen. Henderson Brooks and Brig. Premindra Singh Bhagat, to probe war and its consequences.

History is repeating on this front also. Since May 2020, Chinese and Indian troops have engaged in aggressive melee, faceoffs, and skirmishes along the Line of Actual Control (LAC). In June 2020, Chinese forces objected to Indian road construction in the Galwan River valley, resulting in the deaths of 20 Indian soldiers.

US attention deflecting from Asia-Pacific

The militaries of both countries have so far held 14 rounds of talks without any breakthrough. The 14th round of the meeting at the corps commander level was held at the Chushul-Moldo border meeting point on the Chinese side of the LAC in eastern Ladakh.

The 13th round of talks last Oct. 10 last year ended in a stalemate with the Indian army saying after the dialogue that the “constructive suggestions” made by it were neither agreeable to the Chinese side nor it could provide any “forward-looking” proposals.

The Ukraine crisis has also deflected US attention from its Asia-Pacific policy, leaving the allies wondering if its aim to contain China in the region has taken a back seat.