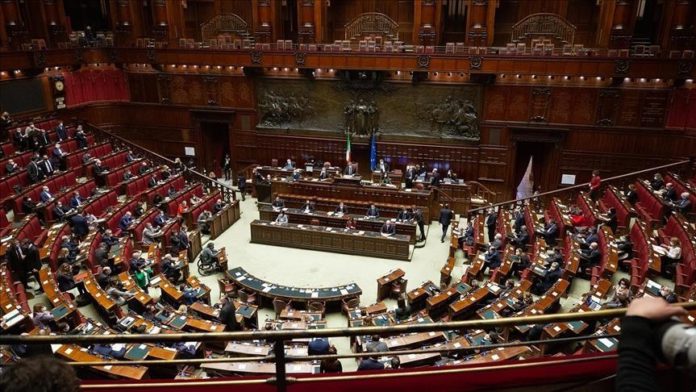 *The writer is an Italian academic expert on Political Science and International relations. She is the scientific director of Observatory in Turkiye by CeSPI.

After many voting days, Italy has renewed the mandate of the outgoing President Sergio Mattarella, although he had before expressed his intention not to extend further the office. The elections were a long and tormented process, dictated above all by the inability of party representatives to agree on one candidate name. The recent dynamics highlight the current fragility of Italian politics at a time when peculiar decision-making urgencies are on the table.

Upon article 83 of the Italian Constitution, “The President of the Republic is elected by the Parliament in joint session of its members. Three delegates from each Region participate in the election (…). The election takes place by secret ballot with a majority of two thirds of the assembly. After the third ballot, an absolute majority is sufficient.”

The elections for the 21st president took place under this framework, bringing to the surface the stalemate of Italian politics. Due to the fragmentation of the political landscape, made upon coalitions of convenience and very fleeting understandings, a year ago Mario Draghi had been invested as President of the Council of Ministers by President Mattarella himself, with the aim of managing the delicate transition experienced by Italy along the pandemic. Indeed, the discontent towards internal political dynamics was so deep that, in order to maintain a certain balance, the appointment of a technical figure at the top of the new government team was intended not only as a legitimate decision, but also as a necessary move to ensure sustainability.

As restarting and recovery have been the main pillars of Draghi’s politics, pivoting on re-launching Italy as a coral EU and western power, many dossiers were opened in this scope. Among the others, the most significant is the Italian National Plan on Recovery and Resilience, conceived for implementing the EU Next Generation funds. Besides that, thanks to his expertise as European Central Bank governor, Draghi was perceived as a stabilizing factor in the parliamentarian logics as well as a reforms guarantor able to pursue the goals by avoiding the possibility of snap elections. Although this was the political atmosphere heading the last presidential elections, they were furthermore characterized not only by the usual polarization between the right and the left, but also by renewed intra-coalition and intra-party cleavages.

In the very first stage, the candidacy of Silvio Berlusconi was taking hold, aiming at uniting all center-right parties. However, along its decline, besides the lack of a common candidate as well as for the center-left, severe dysfunctions of the current Italian political system emerged. Votes kept going for days while Italy was waiting for the new president.

As matter of fact, in the first four rounds, almost all of the majority parties opted for white ballot aiming at buying time and building transversal agreements for the absolute majority voting rounds. Meanwhile, behind the scenes, the political leaders with the most negotiating powers engaged in consultations with Prime Minister Draghi. It was a two-track competition: deciding the future President on one hand while on the other Mario Draghi’s destiny was discussed, either at the top of the government or possibly as the head of state. Actually, moving Draghi to the presidency would have generated a stability risk for the Country, although it meant that politics could finally take possession of its own spaces.

Thus, the debate on the president was linked to the one on the executive. The maneuvers have been complex and intricate, as the parties along their tactics found themselves to base their preference either on loyalty to the government or to their own coalition. In a growing atmosphere of concern, what was emerging was an increasingly complicated impasse where the only way out was the re-election of Sergio Mattarella.

Although his name has been always present in the ballots, it was only at the eighth ballot that he obtained the absolute majority with 77% of total votes. Clearly, the aim of the election was to maintain the status quo, meaning that Mario Draghi’s government will remain in office, with the same majority until the next parliamentary elections to be held in spring 2023. In other words, nowadays Draghi seems to be the only credible option for assessing Italy’s domestic and regional role. Nevertheless, the thorny election is also a sign of deep political weakness.

After days of discussions and negotiations, the party coalitions come out fractured, leading the way to an in-depth internal reflection. While the members of parliament have kept their seats and the stability of the government is apparently preserved, there is margin to think that from now the path will be full of changes and intestine battles of power within the two political blocks of the establishment.

Moreover, what the country witnessed in the electoral week shows the serious inability of the current Italian politics to take its own course as well as to face any challenge. In this institutional design, the principles of accountability, responsiveness and responsibility seem affected by many gaps. Hence, starting by redesigning the system on the direct popular election of the Head of State could be a viaticum to ensure greater functionality and democratic efficiency.

There is no doubt that today, in his second seven years tenure as president of Italy, Sergio Mattarella is the symbol of the great respect and sense of responsibility towards state institutions. In this regard, his long speech at the time of oath needs to be understood as an invitation to revive the parliamentary dignity as well as parties’ political participation. Indeed, the big changes Italy is called to address need to be governed by politics, parliament and people.