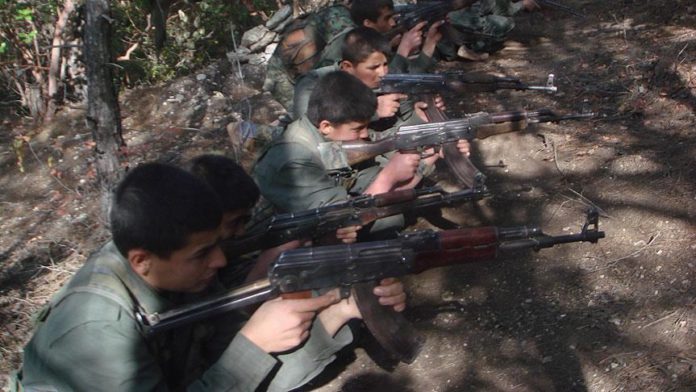 [The writer is an administrative affairs coordinator and lecturer at the Istanbul Center of International Law.]

The terrorist PKK and its Syrian offshoot the so-called “People’s Protection Units” (YPG) continue to forcibly recruit children despite strong objections from their families. These days mark the first anniversary of a sit-in protest initiated by mothers outside the office in Diyarbakir, in southeastern Turkey, of the Peoples’ Democratic Party (HDP) – which has ties to the terrorist group – because the terrorist groups even deny the families contact with their children afterwards. The PKK/YPG’s use of child soldiers is also criticized by the United Nations. The UN report on Children in Armed Conflict annually reveals cases of child recruitment by the YPG, a trend which has gained momentum over the last four years. International human rights groups have also reported many instances of YPG use of child soldiers in its ranks and accused the terror group of committing war crimes.[1]

The use of child soldiers is a grave human rights violation prohibited under international law. A video released last month by PKK-affiliated media showing a number of girls spreading PKK propaganda was just another horrific example of the well-established fact that children have been fighting in the PKK ranks as well as its Syrian branch the YPG.

This analysis seeks to establish an international legal framework on child soldiers enlisted by the PKK/YPG, and to examine why children are being used as well as how to end their use by the terror organization.

The recruitment of child soldiers in conflicts is prohibited under the 1949 Geneva Convention on the Protection of Civilian Persons. The Convention and its Additional Protocols prohibit the use of children under age 15 as soldiers, which is defined as a war crime by the International Criminal Court. Article 38(3) of the Additional Protocol II provides that children under 15 “shall neither be recruited in the armed forces or groups nor allowed to take part in hostilities.”

Moreover, the UN Convention on the Rights of the Child and its Optional Protocol prohibit children’s participation in hostilities.[2] These conventions mostly concern states, and do not cover armed groups and terrorist organizations. However, these conventions provide a framework for individual and state responsibility under international law. They do not hinder the obligation of states which are parties to these conventions as well as the responsibility of their individuals. In this regard, there needs to be a focus on understanding why the PKK/YPG uses child soldiers and how other states may help prevent the PKK/YPG’s use of children in their activities.

Why use child soldiers?

Despite knowing full well that international law prohibits the recruitment and use of children under 15 and their participation in terrorist activities, PKK/YPG leaders still prefer to continue this violation for three reasons.

First, children are used as a last resort by a terrorist group when they have no other means of support left in terms of manpower. The Lord’s Resistance Army in Uganda, the Revolutionary Armed Forces in Columbia, Boko Haram in Nigeria, the PKK/YPG in Syria and Iraq all dreadfully abuse children mostly when they begin to lose their power to maintain the conflict. While some children serve as porters, sentries, or cleaners, others carry weapons, exercise authority over others, and commit atrocities against adults and children alike. Even Nazi Germany started throwing 15-year-old “Hitler Youth” into battle in the final months of the war, as Germany was being overrun and devastated. Thus, the PKK/YPG’s forced use of child soldiers coincides with the general trend within rebel groups that indicates a serious loss of manpower within the PKK/YPG.

Second, the targeting of child soldiers by a legitimate armed force raises moral and legal questions. Some hold that consciously targeting child soldiers, as opposed to adult combatants/terrorists, is morally wrong. If you asked lawyers whether a fighter under the age of 15 constitutes a legitimate military target, most would answer this question in the negative. Nevertheless, the law does not provide such a privilege for children who directly participate in a conflict. The Turkish Armed Forces (TAF) has long been known for its compliance with international law and its practice of treating child soldiers not as targets but as victims. In many instances, the TAF seeks to protect children during conflicts instead of targeting them. Taking advantage of this merciful attitude, the PKK/YPG has used children in numerous cases as human shields to decelerate Turkish military operations’ advancement.

Third, the PKK/YPG use children to exercise control over the Kurdish populations in Turkey, Syria, and Iraq. The PKK/YPG has long been trying to mobilize Kurds against the central government of Turkey and drive Kurdish communities toward an atmosphere, and a psychology, of “total war.” The terrorist leadership targets children explicitly, and recruiting them as militants remains a threat to society. Once their children have been forcibly recruited, their families become more dependent on the PKK/YPG in order to somehow maintain their ties with their children and keep their hope of reuniting with them.

In order to effectively respond to the problem of child soldiering, the international community needs to develop a political and legal mechanism. On the political side, terrorist groups should be treated as such and allowed no space for any sort of propaganda, which will hopefully minimize their chances of “romanticizing” their activities and reaching minors. On the legal side, states should prioritize holding those who recruit them to account within their domestic legal systems.

As far as political measures are concerned, the dominant image created in Western media of terror groups such as the PKK/YPG is designed to show them as “a passive, helpless revolutionary group that has been fighting for democracy.” One of the biggest myths prevalent in the West about the PKK/YPG is that they have been serving as vehicles for democracy, freedom, and that they are actually “legitimate security forces” greatly helping to prevent the Daesh/ISIS threat in Syria and Iraq. The fact of the matter is that the PKK has long been motivated to fulfill its separatist dreams inside Turkey and, to that end, forces even children to join its ranks, and abduct, drug, brainwash, and brutalize them when they prove unwilling to do so.

In short, states and the media should be a lot more cautious in the portrayal of the PKK/YPG, which use child soldiers as shields in its terrorist attacks, an instrument for maintaining control over a certain portion of the society, and as dehumanized tools of war robotically programmed to kill. The current image of the PKK/YPG in international media, however, is still very far from giving an accurate picture of the brutal, inhumane, and immoral motives of these terrorists.

States must take all necessary steps to ensure that the PKK/YPG leadership do not go unpunished and also prevent their institutions from providing any sort of material to such terrorist groups, which constantly commit war crimes.

First, assisting an armed group that violates international law also requires the responsibility of supporting states. The aiding and abetting liability of states originates in the smallest instance of support to the internationally wrongful acts of armed groups. While the PKK/YPG is recognized as a terrorist organization and not as an armed group by Turkey, this, nonetheless, does not constitute an impediment for Turkey to claim the responsibility of states that support the PKK/YPG in its commission of war crimes. Under this framework, an assisting state may also be violating international law, and therefore must immediately stop providing support to the PKK/YPG.

Furthermore, states may assert universal jurisdiction to use their national courts to prosecute PKK/YPG commanders for recruiting children. Based on universal jurisdiction, national courts can prosecute such war criminals. Today 163 of the 193 UN member states have legislation that authorizes prosecution of war crimes under universal jurisdiction.[3] Some states even have specific legislation for recruiting children in war. For instance, the US’ Child Soldiers Accountability Act of 2008 makes it a federal crime to recruit knowingly or to use soldiers under the age of 15 and permits the US to prosecute any individual with regard to this, even if the children were recruited or used as soldiers outside American territory.[4] Thus, under this law, the US government is obliged to prosecute PKK/YPG commanders if and when they appear on US soil. Moreover, the act prohibits American military aid to the PKK/YPG due to their recruitment and use of child soldiers. Unfortunately, despite the law being in effect, the US government has never imposed such measures against the PKK/YPG, and has even established military cooperation with these terrorist groups in northern Syria, contrary to all its obligations under the act.

These legal measures are aimed at ending all forms of support going to such terrorist groups by identifying the responsibility of aiding states, as well as by trying those responsible for enlisting and recruiting children for terrorist acts. These will hopefully shield children from any armed conflicts as much as possible.

Until Western governments and the media make these changes in their portrayal of and support for the PKK/YPG, they will hinder those mothers’ efforts to put an end to something we all ultimately want to see gone once and for all: children ending up in the killing machine of the PKK/YPG.