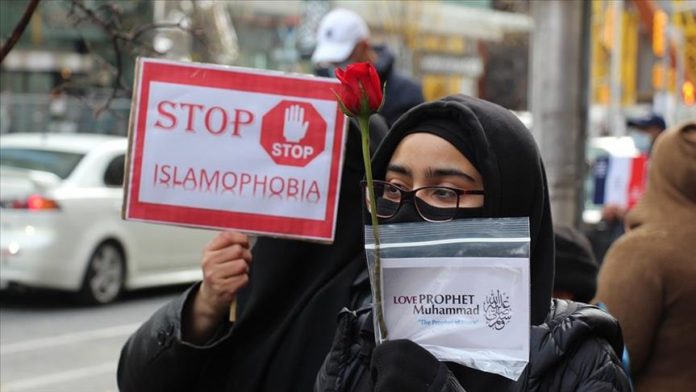 Discourses targeting Muslim minorities as part of the hate narratives that are emerging in Europe have, with a holistic perspective, begun to be aimed at the religion of Islam. A number of issues defined and discussed under “clash of values” have been turned into overt hostility towards Islam, with Muslim foreigners representing a highly unwelcome element in the “European home”. This hostility and aggression, whose magnitude calls for a reconceptualization of the term ‘Islamophobia’, is now perceived as a new form of anti-Semitism directed towards Islam and its followers. The perception of “antagonist”, built on the narratives of hatred for Islam and Muslims — two hatreds that actually feed on each other –, stigmatizes Muslims as “inferior”, places them at the center of xenophobic, aggressive and neo-racist hate speech, and these discourses are then instrumentalized by far-right political parties and radical groups in Europe. Anti-Islamic incidents that erupted one after another, especially in Norway, Sweden, Germany, Britain, and France, also reveal — through hate narratives that have evolved into neo-racism — the pathological neurotic anxiety that a group of people have developed and ontological insecurities arising from this anxiety. These marginalization efforts and populist narratives that have surfaced with far-right parties in Europe are accepted by certain segments of peoples; but the socio-psychological background of this acceptance is often overlooked.

Anti-Islamic provocative acts began to increase in Europe at the end of August 2020 after Rasmus Paludan, the leader of the far-right Stram Kurs (Hard Line), burned a copy of the Qur’an in Malmö, Sweden. Following the growing tension between Muslims and far-right groups in Sweden, a far-right group in Oslo, Norway, also a member of the “Stop Islamization of Norway” (SIAN), tearing up the pages of the Qur’an and insulting Islam and the Qur’an caused widespread outrage. Subsequently, torn out and burned Qur’an pages with hate speech and threats written on them were left, along with some bacon, in front of a mosque in Sweden. The announcement of the French Charlie Hebdo magazine’s decision to republish some notorious cartoons published in Denmark in 2005 proved, once again, that the hostility was being directed towards Islam itself. The tension, further heightened by the French president’s description of Islam as “a religion in crisis”, has also shown how the anti-Islam narrative is constantly being regenerated by populist politicians as a propaganda tool. All these developments help to further substantiate that there is a new wave of cultural-racism (neo-racism) or anti-Islamism in Europe.

Populist politics, which never ceases to be in the limelight in the “age of uncertainty and anxiety”, continues to thrive in line with the “zeitgeist”. The socio-psychological background of populist politics, which is often ignored in many of the commentaries made, leaves in the dark the social ground of political narratives that continuously reproduce anti-Islamism. This social base does not have ordinary anxieties about the religion of Islam, and their extreme anxieties stem mainly from the lack of awareness of the doctrines of the religion of Islam, that is, not knowing the religion itself. The first and most critical factor that triggers the neurotic anxieties of these people is that they keep passing arbitrary judgments about Islam, even though they know next to nothing about it in reality, and that they are trying to fit Islam into narrow stereotypes. Therefore, that group of people, claiming that they know best, despite the obvious fact that they do not know and do not even know that they do not know, belong to the category of “compound ignorance” of all the types of ignorance. This is the most important point to be emphasized; for an entire building of hostility is rising on this foundation as if to prove the universal maxim that “People are enemies to what they do not know.” A group of people in Europe have pathological neurotic anxieties about the religion of Islam, and by extension, about Muslims, both of which they perceive as a threat to their ontological security. In addition, the aggression they display due to their inability to tolerate this anxiety reveals that the kind of anxiety they experience is not an ordinary one.

Muslims are forced to be open to criticism of their beliefs, while their freedoms are ignored in the meantime. Although these issues are dealt with within the scope of freedom of speech, freedom of the press and criticism, the most basic rights of Muslims, such as “freedom of religion and conscience”, are being violated. Moreover, while Muslims and the doctrines of Islam are being targeted by violent, humiliating and mocking acts, all legal implications of these acts are also ignored.

There are a few underlying reasons as to why Muslims began to be associated with violence and terrorism in the wake of September 11, and why there is such a strong tendency to hate, which has since evolved into anti-Islamism. The first reason is the presence of people who identify themselves as Muslims, who are inclined to violence because of their misinterpretation of the religion, and their violent actions have nothing to do with the Islamic faith. These group of people who are inclined to violence do not at all represent Islamic values and cause the religion to be misperceived, and they represent a mentality that all Muslims must struggle against in the first place. Another reason is Europe’s entirely prejudiced, marginalizing and arrogant view of Muslims; without understanding Islam, they pigeonhole all Muslims into the same category, and stereotype and stigmatize them with such notions as “terrorism,” “underdevelopment,” “being prone to violence” and “being inferior to European values”. In addition, it is clear that certain segments of European societies, which seem to have forgotten their anti-Semitic past, are hostile to Islam in a wider scope today (hostility towards a religion, not a race), and their hostility is caused by neurotic anxieties.

The term Islamophobia itself, which consists of the words “Islam” and “phobia” no longer suffices to explain the horrible attacks on the sacred elements of Islam. Kierkegaard says that anxiety has no object, while describing fear as a real and specific threat. That is to say, people tend to get anxious about things with no real existence, just as they do in the case of Europe. Yet there are varying degrees of anxieties. While normal levels of anxiety are present in all humans due to the ever-present likelihood of physical and existential threats to one’s life, neurotic anxiety is not observed in all. People with normal levels of anxiety, whom we may see as in the description of Hafez-e Shirazi, the legendary Iranian Sufi poet of the 13th century, “The Heart: A Drop of Blood and a Thousand Worries”, can constructively confront these worries, tolerate them and, furthermore, be open to change. As for neurotic anxiety, it is generally seen in people who perceive others as a danger to their existence. For these people, who do not have a reflexive perception of themselves, it does not matter whether or not their existence is genuinely threatened. What they find important is the experience that comes from their high levels of anxiety, and their belief that their existence is in danger.

Psychoanalyst R. D. Laing describes this pathological anxiety as a condition of a group of schizoid and schizophrenic patients that “perceive many people as a danger to their existence.” In the face of dangers, which may come in different forms throughout one’s life, individuals with neurotic anxieties, unlike those with tolerable levels, are excessively reactive to the inability to be in control and are in a state that is highly averse to any form of change. Karen Horney says that people who believe that their feelings of ontological security are in danger feel helpless and that they declare the people they think are causing this desperation to be “enemies”. While neurotic anxieties and the reactions commonly associated with them, which are very subjective and definitely not generalizable, were described by Paul Tillich by mentioning the Nazis as an example, Rollo May associates this pathological anxiety with the emergence and rise of fascism. This is how the rising populist far-right narrative in Europe finds support within communities. These neurotic anxieties, which began as hostility to Muslims, have now evolved into open anti-Islamism or outright hostility to Islam.

The main question now to be asked is: where is Europe headed, with its unity once built on the narrative of the Holocaust now being reconstructed on the narratives of hatred towards Islam? The inability to make the correct diagnosis, however, along with these developments, will in turn lead to a failure to find the appropriate form of treatment.

[ The writer earned her bachelor’s and master’s degrees from Istanbul University, and now is a Ph.D. student in international relations at Istanbul Medeniyet University. ]

Translated from Turkish by Can Atalay​​​​​​​