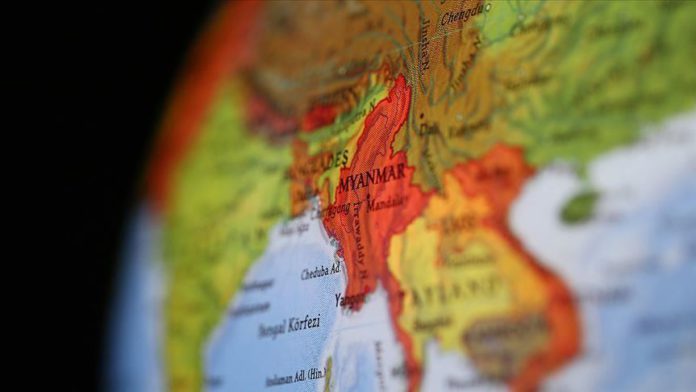 Although 11 of Myanmar’s 14 provinces are embroiled in strife, only western coastal Rakhine region has taken communal overtones.

The UN described the army’s actions — ranging from citizenship denial, rapes, killings and land confiscation – as textbook examples of genocide.

According to a former special advisor to the UN Secretary-General on Myanmar, some militancy-affected areas lie within 100 kilometers (62 miles) of the capital of Naypyidaw, or the largest city, Yangon.

But the attitude of the government in tackling insurgency in these areas is markedly different from its dealing with Rohingya Muslims, who neither demand secession, independence or even regional autonomy.

“Rohingya are not fighting with any community or with the government. They want to live in Burma as peacefully as anybody. It is Rakhine Buddhists who are fighting the central government of ethnic Burmese to reclaim their sovereignty they have lost 200 years ago,” said UK-based Myanmarese scholar Maung Zarni.

He said the world does not know these facts about Myanmar and tends to focus on the Muslims versus Buddhist paradigm.

Researchers associated with the Asia Foundation have found Myanmar’s conflicts involve some of the most powerful non-state armed organizations in the South and East Asian region.

The United Wa State Army (UWSA), with a force of 20,000 fighters, is the largest of Myanmar’s ethnic armed organizations, equipped with modern and sophisticated weaponry, allegedly operating a formidable drug empire in the Golden Triangle region which includes border areas of India, Thailand, Laos and Myanmar. In September 2018, the group detained church workers and demolished churches, despite entering a cease-fire agreement with the central government in October 2015.

In the northernmost state of Kachin, insurgents under the banner of the Kachin Independence Army (KIA), who mostly belong to the Christian faith, are also fighting for independence. In 2012, fighting between the KIA and the government resulted in around 2,500 casualties, including 211 soldiers. The violence resulted in the displacement of nearly 100,000 civilians and the complete or partial abandonment of 364 villages, according to Geneva-based International Displacement Monitoring Center.

The second-largest EAO is the Shan State Army -South (SSA-S), which has 6,000 to 8,000 fighters and maintains bases along the Myanmar-Thailand border.

UN officials said, like in Afghanistan, some conflict-affected areas in Myanmar are governed by EAOs to the extent they operate parallel state-like agencies that build roads, train teachers and administer local justice.

Other areas of Myanmar are also prone to conflict, although they may not be affected by violence at any given time. Armed groups and their proxies are engaged in a range of disputes; in Kayin State, on both sides of the border between Rakhine State and Chin State, where the Arakan Army (AA) and the Arakan Liberation Army (ALA) have a presence.

Both practice the Buddhist religion and campaign on a nationalist agenda demanding more autonomy of the region. Ironically, they team with the Myanmar army by showing hostility toward local Rohingya Muslims, claiming they are not natives of the region, but illegal immigrants from Bangladesh.

In northern Rakhine, the Arakan Rohingya Salvation Army (ARSA) has emerged as a new movement to protect the interests of minorities. Ironically, it is Buddhist groups who initially fought Myanmar central rule in the region. Both ethnic armed groups used to see Muslims as collaborators with the central government, opposing their project of self-rule and a separate province.

According to the Asia Foundation, patterns of violence associated with Myanmar’s subnational conflicts are varied, at times involving heavy weapons as well as light arms. Repeated clashes between the Tatmadaw and EAOs during 2016 involved large ground forces seeking to gain control of territory in Kachin and northern Shan states. Both sides used artillery and the Myanmar Air Force employed tactical airstrikes.

The current National League for Democracy (NLD)-led government of State Counsellor Aung San Suu Kyi, and the Myanmar Armed Forces (Tatmadaw) have been offering a dialogue to sustain a cease-fire with these groups. The government has been reaching out to EAOs in a bid to end subnational conflicts, offering reforms and finding common ground on national issues. There is a marked contrast in its behavior while treating Rohingya Muslims.

According to former Guatemalan Foreign Affairs Minister Gert Rosenthal, who probed UN operations in Myanmar, the treatment accorded to Muslim minorities in Myanmar is incompatible with the political and peace processes launched under the Constitution adopted in 2010.

“There simply is no way to reconcile the extreme limitations imposed on the Rohingya community with international humanitarian and human rights norms and legislation. Those grave limitations include statelessness, arbitrary and discriminatory restrictions on freedom of movement, discriminatory treatment in access to services and the means to a dignified livelihood,” he said in a report last year presented to the UN Secretary-General.

He charged that the UN system has been relatively impotent to effectively work with authorities in Myanmar to reverse negative trends in the area of human rights and consolidate positive trends in other areas.

[ The writer is a senior journalist at Anadolu Agency ]