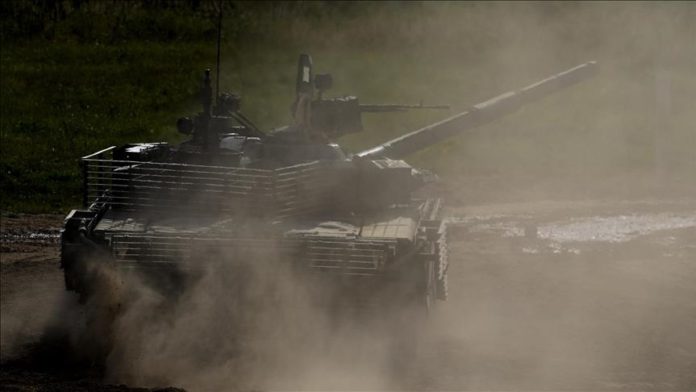 The writer is a Turkiye-based journalist, who writes analyses on Turkish foreign policy

The 58th Munich Security Conferences were literally held under the influence of developments related to the “Crisis in Ukraine.” While weapons were fired in the east of Ukraine simultaneously with the conference held on Feb. 18-20, Russia tested its most advanced missiles from air, land, underwater and above-water platforms over a wide area from the Pacific Ocean to the Mediterranean Sea, from the Black Sea to the Barents Sea.

Why didn’t Russia participate in conference?

The conference was marked by those who were not as much as those who were in this organization. The Moscow administration, which has been represented in Germany’s most populous city of Munich at various levels since 1999, was not in Germany, despite the invitation to Russian President Vladimir Putin. Although the Russian side cited the COVID-19 restrictions as a reason for their refusal to participate, the real reasons for the refusal of the invitation were deciphered between the lines of the statement of the Russian Foreign Ministry Spokesperson Maria Zakharova on Feb. 9.

According to Russia, the Munich Security Conference has now turned into a “Transatlantic Forum” and has lost its inclusiveness and objectivity. The Kremlin’s discomfort is not limited to this. Wolfgang Ischinger, who has been the chairperson of the Munich Security Conference Forum since 2008, raised the bar of criticism against Russia before leaving office, and his successor, ambassador Christoph Heusgen, who took over this year, did not lag behind him in criticizing Russian President Putin, which was instrumental in keeping Kremlin executives from traveling to Germany.

Given the not very warm past of Russia with the German Ambassador Heusgen, the atmosphere created by the conference in the Russian capital Moscow becomes even more understandable. When Heusgen left his country’s permanent representative to the UN at the end of 2020, Dmitry Polyanski, the first permanent representative of the Russian Federation to the UN, sent him off with the following words: “I would like to say goodbye to you in the words of the writer Mikhail Zhvanetsky (1934-2020), who recently left this world. Unfortunately, at the end (!) you are leaving. I hope that with your departure, the Security Council will better fulfill its duties for the protection of international peace and security. I’m very sorry, Ambassador Heusgen.”

Although Russia refused to participate in the conference, President Putin’s speech at its participation in 2007 remains valid for today. In his speech in Munich 15 years ago, Putin raised his objection to the unipolar world order by saying: “The Western alliance system with the understanding of ‘one master, one sovereign’ sitting in Washington will destroy itself”. In the same speech, Putin also recalled Russia’s demands for a security guarantee that NATO would not move further eastward, quoting a speech by former NATO Secretary-General Manfred Worner on May 17, 1990. In that speech, Worner said: “The fact that we will not deploy a NATO army outside the borders of Germany will provide the Soviet Union with a solid security guarantee.” Putin also recalled this phrase of Worner’s in 2007, telling the participants of the Munich Conference: “So, where are these guarantees?” The Kremlin continues to ask the same question today.

Full staff of US administration in Beijing

As soon as the US administration confirmed the criticism of Russia that the organization was turning into a Transatlantic Forum, almost the full staff arrived in Munich. The US delegation was led by Vice-President Kamala Harris, while more than 30 congresswomen were also in Munich to show their support for Ukraine in particular.

The issue of sanctions that will be put into effect against Russia, but the details of which have not been disclosed, was also at the center of the speech of the US Vice President Harris. Harris also expressed her satisfaction with the sense of unity created by the developments in Ukraine among NATO members, stressing that a decisive period has passed in terms of the course of history.

Call from Zelenskiy to ‘be sincere’

It was a loud statement of the reproaches of his country that Ukrainian President Volodymyr Zelenskiy expressed both in his speech to the participants and in his meeting with the US vice president. Zelenskiy, addressing Western countries, stated: “If you are telling us that there is a 100% chance of an invasion, then why not put in place preventive sanctions, what are you waiting for?” Another question that the Ukrainian president mixed with criticism was related to his country’s NATO membership process. Zelenskiy, who asked to be presented with a clear roadmap for membership in Ukraine, stressed: “If you don’t want to see us here, be sincere. It’s nice that the doors are open, but we also need answers.”

“We are not in a state of panic. We are aware of who is trying to kill us, who is shooting at us,” the Ukrainian president said, underscoring that he trusts the intelligence data of his own country rather than the US. “But we will also not allow those who shoot, hiding behind civilians, to escalate tensions by provoking us,” he said while demonstrating the distance between himself and Washington with his words. However, the response to Zelenskiy’s words from Moscow, where he was looking for a dialogue, did not turn out the way he expected. On Feb. 20, Kremlin spokesperson Dmitriy Peskov said in response: “Putin has every reason to no longer see Zelenskiy as someone who can fulfill the Minsk Agreements.” He closed the doors to the prospects of negotiations between the two leaders with these words.

One of the results of the conference, which is expected to become clear in the medium term, will be India-Russia relations. Prior to the conference, it had been leaked to the press that Western countries would express their expectations from Indian Foreign Minister Subrahmanyam Jaishankar that his country would take a tougher stance against Russia. Jaishankar faced similar demands when he met with British Foreign Secretary Liz Truss at the Quad Ministerial meeting attended by US Secretary of State Antony Blinken in Melbourne two weeks ago and at the “South Block” meeting three weeks ago. Western countries do not expect that India, which has long been in a strategic partnership with Russia, will take a front against Moscow in the short term, but they hope that Indian capital New Delhi will support the territorial integrity of Ukraine.

It is estimated that how India will approach during the Munich Security Conference will be determined by the Pakistani Prime Minister Imran Khan’s visit to the Russian capital on Feb. 23-24, with the increased cooperation between Russia and China. Imran Khan will be the first to make a visit to Russia from Pakistan at the highest level for 22 years.

Russia’s rapprochement with China, where India is experiencing border conflicts, and Pakistan, where it is in nuclear competition, can undoubtedly lead to changes in New Delhi’s threat assessments.

The Munich Security Conference, which began under the influence of an area of high pressure created by the Ukrainian crisis, preferred the title “Reversing the Course in Foreign Policy-Rejecting Learned Desperation” for the prepared report. The first report, published in 2015, was 72 pages. But the variety of crises facing the world today (energy, food, climate, supply, epidemic, etc.) led to the 2022 report reaching 182 pages. According to the experts who prepared the report, societies today face a “collective desperation”, as do individuals. In particular, the inability of societies and state structures to respond to the increasing pressure for change, especially when the first quarter of the 21st century is being completed, comes to the fore as the main element focused on in the report. However, the Ukrainian crisis has not allowed the 35 heads of state and government and more than 100 ministers to address these issues to the desired extent.

In my analysis for the Anadolu Agency for the evaluation of the 55th Munich Security Conference in 2019, I used the title “Funeral of Globalization: The 55th Munich Security Conference”. In as short as three years, the unresolved problems of the finale of the First Cold War and the ongoing effects of the 2008 Global Economic Crisis, combined with the new threats of the 21st century, decimated the bridges between the Transatlantic world and Eurasia.

As the rivalry between the two superpowers of the two world escalates, countries such as Germany, Ukraine and France, which are in the middle of the front line, are moving towards a deeper geopolitical crisis. The determined attitude of the UK and US to prevent Russia from returning to the “Big Game”, where it demands a re-determination of its spheres of influence, makes the NATO summit in the Spanish capital Madrid in June more critical.

The developments indicate that NATO’s plan to move eastward is not limited to Ukraine-the Black Sea and the Caucasus, while the alliance also sees the Indo-Pacific region as its sphere of influence. A world awaits us in which geopolitical contradictions will become even sharper if Taiwan and the South China Sea turn into the Ukraine of Southeast Asia.

*This analysis is translated to English by Merve Berker in Ankara