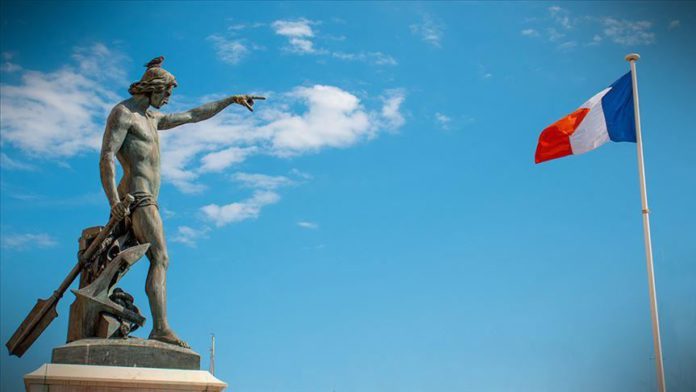 France has become increasingly more interested in the Eastern Mediterranean during the tenure of President Emmanuel Macron. As it has been deeply interested in regional issues such as Syria, Lebanon, Southern Cyprus, and primarily Libya, Paris has allied with a number of external powers such as Russia, the United Arab Emirates (UAE) and Saudi Arabia, as well as internal players like Greece, the Greek Cypriot administration of Southern Cyprus and Egypt.

It has been particularly noteworthy that Paris does not hesitate to cooperate with illegal actors such as the coup plotter Khalifa Haftar and terrorist groups such as the YPG/PKK, and it tries to involve the European Union (EU) in the game whenever it gets stuck in a difficult situation.

This policy has resulted in a confrontation between Paris and Ankara on maritime jurisdiction issues in the Eastern Mediterranean as well as over Libya, Syria and Southern Cyprus. Therefore, understanding the objectives of France’s Eastern Mediterranean strategy and what instruments are engaged to those ends is very important for the execution of Turkey’s policy towards this region and the EU in a rational manner.

Let’s remember that Macron, who was elected president in 2017, took office at a time when the far-right movements in the US and Europe had been strengthening, and all those involved were becoming more and more concerned about what France’s European roadmap would be in this atmosphere.

Deeply worried about the consequences for the EU in the event of far-right Marine Le Pen taking over the French presidency, international and national circles made concerted efforts to ensure that Macron won the presidential race as a new political figure hastily created. Even though the centrist parties well-established in French politics came near the verge of extinction in these elections, they still managed to curb the power of the far-right parties as a result of collected efforts. A big responsibility is now falling on Macron to avoid the same predicament against the far-right in the next presidential election to be held in two years.

He was supposed to save France from being so dependent on Germany, but he had to achieve this by staying in the EU. The biggest criticism of Le Pen –waiting in ambush now– toward the centrist parties entrenched in French politics was that France was falling under German influence. The number of votes Le Pen garnered showed that her criticisms reverberated across French society. “A woman will rule France,” Le Pen warned ahead of the presidential election; “and that woman will either be me or Merkel.” These words of Le Pen demonstrated France’s troubled relations with Germany.

Macron believes that he came to office with a mission to deliver France from the shadow of Germany and return it to its old and powerful days, and, in this way, make it the actor holding the reins of power in the EU.

If Macron fails in this mission, the far-right taking power in France in the next election is a prospect that he fears but also sees as a new opportunity for himself.

Europeans, who likewise fear the same outcome, are throwing all their support behind Macron so he can pull off a victory. But Macron, who was carried into power with great hopes and support, has been facing serious problems in domestic politics since his arrival, and his legitimacy in French society has seriously eroded, especially during the so-called Yellow Vests protests. The reforms that France tried to put in place for the maintenance of its competitive power against Germany and other European countries met with great resistance inside, and ultimately they failed to push through the said reforms and Macron’s power weakened.

These problems inside led Macron to take steps to divert the agenda from domestic politics and gave the already interventionist French foreign policy a more pronounced aggressive character. The need to have access to the rich resources of Africa and the Eastern Mediterranean so France could once again become an influential actor in world politics also called for an aggressive foreign policy.

At this point, we need to point out that the policies of France and Germany towards establishing their spheres of influence are getting further apart. Berlin, whose financial capacity is far greater than that of Paris, is implementing this policy more through economic, cultural, and political tools, while Paris, which is not as advanced in these areas, is trying to engage its military tools more. We may say that this differentiation in the means of intervention causes France to have a more aggressive image outside of the EU, and Germany inside of the Union.

The French president, having a hard time mobilizing the EU towards developing a common foreign and security policy, appears to be inclined to act with non-EU partners, particularly on Libya. In this context, we see France backing warlord Khalifa Haftar along with countries such as Russia, Egypt, the UAE, and Saudi Arabia, to topple the Tripoli-based UN-recognized Government of National Accord (GNA), which is backed by Turkey, Qatar and Italy.

The French energy giant Total SA’s increased production and share rates in the major oil and gas fields of Libya during its civil war represents the most important benefit Paris aims to get from its Libya policy.

In its desire to place Libya at the top of its energy supply chain after Algeria in North Africa, which is geographically closer, France wants to decrease its dependence on oil from other regions. Establishing control over the energy resources of Libya would bring a much-needed foreign policy success to Macron and silence his opponents in domestic politics, particularly the far-right Le Pen.

With the attack launched by the forces of Haftar against Tripoli in April last year, France thought it was approaching that goal. The overthrow of the GNA and Haftar dominating the whole of Libya was ideal for Macron, as he was planning to sit down with another Haftar supporter, Putin, to share the energy resources of the country and possibly push French company Total’s biggest rival, the Italian ENI, out of business as much as possible.

Haftar’s other supporters –the UAE and Saudi Arabia– did not pose a problem to the goals France had set in Libya to gain access to energy resources, because their main goal was to build a dictatorial system in Libya similar to that of the Sisi administration in Egypt instead of the legitimate government supported by Turkey and Qatar, and thus prevent the establishment of democracy in the country.

The Haftar forces being prevented from capturing Tripoli and then their being forced to retreat from many areas they had occupied, thanks to Turkey’s support to the GNA, deeply unsettled France in addition to all the other Haftar backers.

The fact that countries that support the UN-backed government, among them Turkey, have been acting within legitimate bounds, whereas, in contrast, those supporting the rebel Haftar taking up a position that was necessarily illegitimate in the sight of the international community has restricted the scope of action of France and other Haftar supporters. Moreover, the goal of toppling the government in Tripoli becoming almost a lost cause — again thanks to the Turkish support– and the oil-rich areas under the control of Haftar forces coming under threat with the GNA forces showing up at the gates of Sirte and Jufra have also proved a further cause of concern for these countries.

At this juncture, France seems to have preferred to shift its center of gravity in the fight against Ankara from Libya, where it has been running out of options, to the maritime jurisdiction dispute in the Eastern Mediterranean, as regards which it hopes to find greater support. Macron, who supports Greece and the Greek Cypriot administration’s maximalist policies against Turkey, is trying to escalate the tensions by sending warships to the region while emboldening Greek Prime Minister Kyriakos Mitsotakis and Greek Cypriot leader Nikos Anastasiadis against Turkey during their frequent meetings that took place not so long ago.

Macron is also trying to get the EU to step in and impose sanctions that would force Turkey to back down. France initially preferred to act alone on Libya but when it found itself in a tight corner because of Turkey’s involvement, it engaged the EU, trying to persuade it to impose an arms embargo to prevent the flow of arms to the GNA, and similarly, it is now trying to persuade Brussels to take action with regard to the dispute Turkey has with Greece and the Greek Cypriot administration of Southern Cyprus.

We can safely surmise from this whole trajectory that, as Macron is taking these steps, he is seeking to capitalize on the negative perception the West has about the Justice and Development (AK) Party rule in Turkey. Sending warships and warplanes to the Eastern Mediterranean against Turkey, which is a very significant NATO member with regard to European security and is indispensable to achieving the goals of the EU’s refugee policy, is not a rational move expected of a country such as France, which has state institutions with long-established practices and traditions.

What is indeed reasonable for Paris is to mediate between Turkey and Greece towards the resolution of the dispute between these two NATO members, just like Berlin has so far sought to do. But French President Macron seems to have been enraged by the steps that President Recep Tayyip Erdogan took, which blew his chances in Libya when he seemed so close to success, particularly given the fact that the failure in Libya came on top of a string of failures he has had to suffer since coming to power in France. When anger takes over, it is no longer possible to speak of rational politics. This is exactly what explains France’s Eastern Mediterranean policy in the Macron era: an irrational policy of power shaped by anger against Turkey, and trying to use the EU to further its own interests.