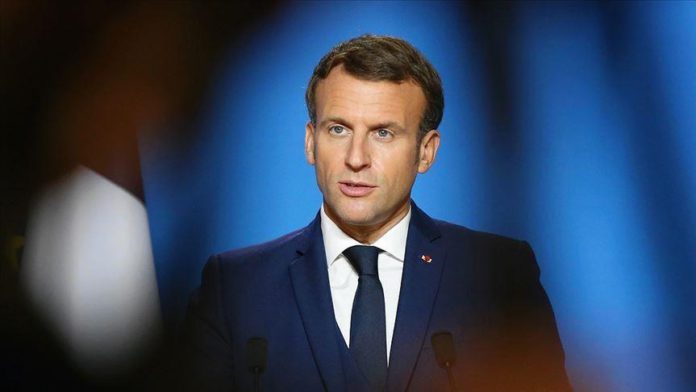 *The writer is Manager at TRT World Research Centre and the author of “The News Media at War: The Clash of Western and Arab Networks in the Middle East.” Dr. Cherkaoui is an expert in the field of strategic communications.

The bestowal of the légion d’honneur (the Legion of Honor) on Egyptian dictator Abdel Fattah al-Sisi at a pompous state dinner at the Elysée Palace has been arguably one of the most shocking news headlines in December 2020.

First established during Napoleon Bonaparte’s reign, the légion d’honneur is the most esteemed award conferred by the French state and is meant to recognize national and international personalities for their ‘eminent services’ to France.

Macron’s decision to honor a putschist who toppled the first democratically elected president in Egypt’s history is disgraceful and underlines a clear loss of moral compass and disregard for democratic values. The problem is exacerbated by the fact that al-Sisi has committed various crimes against humanity, ordered at least one thousand protesters to be killed live on television, and established one of the most abject dictatorships in the Middle East.

The awarding of the légion d’honneur to al-Sisi reveals the huge discrepancy between practice and rhetoric in France with regards to democracy. While French officials like to convey an image of their country as a beacon of democracy and human rights and patronize other nations in Asia and Africa in this respect, France’s record continues to deteriorate.

In France itself, Macron’s tenure has been tainted with massive infringements on human rights. For example, police crowd control and anti-riot tactics, which have caused injuries to thousands of peaceful demonstrators, have been the subject of criticism, drawing condemnation from the United Nations and the French ombudsman.

Another example is Macron’s obsession with curtailing the civil liberties of minorities, especially Muslims. Since the French president announced his willingness to fight the so-called ‘Islamist separatism,’ warrantless police raids have targeted Muslim abodes with the sole purpose of ‘sending a message.’  The decision of the French authorities to dissolve the Collective Against Islamophobia in France (CCIF) and another Muslim non-governmental humanitarian organization, Barakacity, has been fueled by similar questionable motives.

Internationally, Macron has been siding with the worst dictators in Africa and the Middle East. The high degree of synergy between the French Ministry of Foreign Affairs and the likes of al-Sisi, Mohammed Bin Zayed and Khalifa Haftar suggests strong connivance between them regarding their agendas. It raises questions about the hypocritical French rhetoric in support of democracy and human rights and the country’s actual policy orientations.

The French president and his advisors know that this course of action is improper and immoral. The fact that the French presidency did not authorize any journalists to attend the ceremony, and that the images of the visit of al-Sisi were sourced from the Egyptian ruler’s website speak volumes about the French president’s reluctance to put his embarrassing liaisons with al-Sisi on display. This state of affairs prompted Television anchor Yann Barthès to declare: “We will remember that for the first time we went to the site of an authoritarian regime to find out what is happening at the Elysée Palace.”

Moreover, this episode also provoked an outcry amongst previous recipients of the légion d’honneur. Several Italian personalities, such as renowned writer Corrado Augias, former Mayor of Bologna Sergio Cofferati, ex-Minister of Culture Giovanna Melandri, and journalist Luciana Castellina, have also decided to return their decorations to France. Furthermore, the European Parliament was also rattled by this development and adopted a resolution calling for restrictive measures against Egypt because of its grave human rights violations. The Parliament also urged the EU member states not to “give awards to leaders responsible for human rights violations”.

Macron’s spin doctors in France tried to justify his actions by mirroring the lucrative arms and energy deals with al-Sisi. However, they ignore the fact that many of such dealings are illegal and contravene international and European legislation. While the current level of French arms sales to Cairo is higher than at any other time in history, they stand in direct contravention of the 2013 EU resolution, which declared the suspension of export licenses to Egypt for equipment that could be used for domestic oppression. France is also in breach of its legal commitments under the terms of the UN Arms Trade Treaty (ATT), which regulates the international trade of conventional weapons and bans the sale of weapons that fuel human rights violations or war crimes. ATT came into force in 2014. Needless to say, human rights organizations have demonstrated that Egyptian security forces have used French-procured weapons in crackdowns.

All in all, Macron’s decision to grant the most prestigious honorific distinction to the Egyptian ruler is very short-sighted and politically irresponsible. As the world is commemorating the 10th anniversary of the Arab Spring, the MENA region is still reeling. However, people will not forget, nor forgive, Macron’s duplicity and complicity with those who have perpetrated the worst abuses. Not only has the French president exposed, once again, the hypocritical discourse adopted by his administration, but he has also damaged France’s international standing for a long time to come.