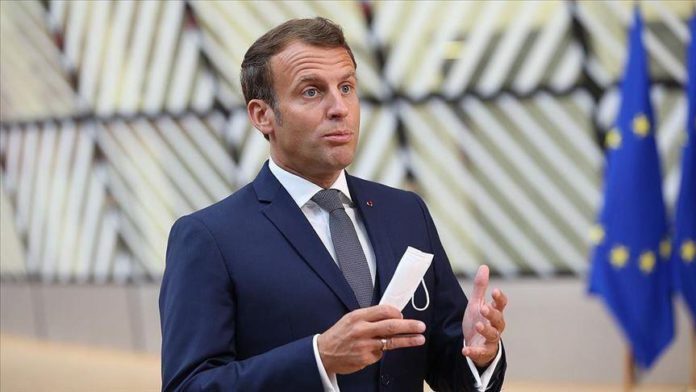 The writer is a professor in political science at the National University of Kyiv Mohyla Academy, Kyiv, Ukraine. His most recent book is Crisis in Russian Studies? Imperialism, Racism and War published in November 2020.

With only two years to go until the next presidential elections in France, President Emmanuel Macron is conducting a nationalistic foreign policy in a vain attempt at preventing his voters from defecting to the Gaullist center-right and far-right Marine Le Pen. Macron’s hardline is visible domestically in new policies to counter Islamic extremism following the beheading last month of French history teacher Samuel Paty by a Chechen-born terrorist. Macron’s hardline abroad is evident in military posturing and support for Christian countries in conflict with Muslim states.

Macron seeks to project France as a great power, and with the UK out, the center of Europe. He has warned that NATO is in danger of experiencing a “brain death,” [1] called for an independent European security force, and supported a reset of relations with Russia.

An undiplomatic exchange between Macron and Turkish President Recep Tayyip Erdogan spiraled over new measures to combat Islamic extremism in France. France has come into conflict with Turkey over Syria, Lebanon, Libya, Greece, and Azerbaijan. French warships and airplanes sent to support Greece and Cyprus exacerbated tensions further with Turkey.

France has been a long-time member of the Minsk Group of the Organization for Security and Co-operation in Europe (OSCE), set up in 1995 to resolve the three-decade-long conflict between Armenia and Azerbaijan over the enclave of Nagorno-Karabakh. The Azerbaijani region of Nagorno-Karabakh and seven surrounding regions were occupied by Armenia in the early 1990s. A 44-day war in September-October of this year led to Azerbaijan taking back all of its territories except northern Nagorno-Karabakh whose fate will be decided in the future.

France is also a member of the Normandy Format, which was set up to assist the Minsk Protocol of the OSCE to discuss steps towards a peace process in Ukraine’s eastern region of the Donbass where a war has raged for the last six years.

Macron is thus sending signals that he picks and chooses with regard to the values he supports. Little wonder that Azerbaijani and Ukrainian policymakers are distrustful of France’s commitment to the principle of the territorial integrity of states. Turkish Foreign Minister Mevlut Cavusoglu also said that Macron supports the occupation of Azerbaijani lands.

France has openly taken the side of Christian Greece and Armenia against Muslim Turkey and Azerbaijan over conflicts in the eastern Mediterranean and the Nagorno-Karabakh frozen conflict in the south Caucasus. Although France is one of the supposed guarantors of impartiality in the Minsk Group, Macron has never hidden his support for Armenia. [2] Last month, the French Senate called for the recognition of the independence of Nagorno-Karabakh with the Azerbaijani parliament [3] responding by demanding that France be removed from co-chairmanship of the Minsk Group. French politicians, such as the late former President Valéry Giscard d’Estaing, for example, [4] have long supported Russia’s annexation of Crimea, on the other hand.

Macron openly supports Armenia, saying, “France reconfirms its future friendship with the Armenian people in view of our close human, cultural and historic ties. We are on Armenia’s side in this dramatic context.” Macron’s and other French politicians’ support for ethnic separatism sends a signal that they cannot be trusted in the Normandy Format to defend Ukrainian territorial integrity, either.

France’s support for Armenia puts Macron in the same camp as Russia and Iran. Armenia has been a member of the Russian-led economic, political, and security integration in Eurasia since the early 1990s. In 2013, Armenia withdrew from the EU’s Eastern Partnership Association Agreement and joined Russian President Vladimir Putin’s Eurasian Economic Union.

Iran, fearful of its large Azerbaijani minority, backs Armenia and Russia in the south Caucasus. Iran assisted mercenaries of the PKK, designated as a terrorist organization by the US and EU, to fight on Armenia’s side in the recent war with Azerbaijan.

France’s nationalistic foreign policy alignment with Christian Greece, Cyprus, and Armenia has led to a further plummeting of relations with Turkey and personally between Macron and Erdogan. Macron has condemned Turkey for using “warlike rhetoric” and for being “reckless and dangerous” in encouraging Azerbaijan, calling upon Erdogan to end “provocations in the region”.

French experts [5] believe France should instead be taking a more impartial and neutral stance to encourage dialogue rather than hostility in the Mediterranean and reaching an agreement with Turkey. Turkey, an important ally in the fight against terrorism and Islamic extremism, was wrongly excluded from the chairmanship of the Minsk Group, which was dealing with a conflict in Turkey’s backyard.

After years of France being AWOL and taking no interest in Nagorno-Karabakh, leaving a vacuum Russia was only too willing to fill, Macron threatened Turkey with EU sanctions for supporting Azerbaijan. Macron seemingly believes post-Brexit that France speaks on behalf of the EU. Brussels though would be reluctant to adopt sanctions against Azerbaijan which had after all only re-taken its sovereign territory. This had been envisaged through negotiations by the 2009 Minsk Groups ‘Madrid Principles’ but had never been implemented because of Armenian intransigence.

Macron is seeking to be more nationalistic domestically and internationally than his Gaullist and far-right opponents. The French president should at the very least clarify whether France supports ethnic separatism or the principle of the territorial integrity of states; he can’t have it both ways.