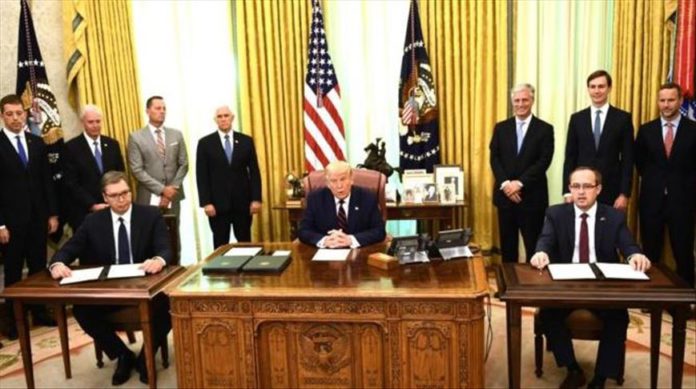 *The writer is a scholar of comparative politics of ethnicity and nationalism, with a regional focus on Balkan/Southeast European countries. He received his PhD in Political Science from Koc University. His articles have been published in leading area studies journals, such as Mediterranean Politics.

On September 4, the Trump Administration hosted Kosovo and Serbia’s delegations in the White House to culminate a normalization process between the two countries, which has been crooked since the very beginning. In the glitzy signing ceremony held at the Oval Office, Serbia and Kosovo agreed to move forward with “economic normalization” by signing up to a number of undertakings. However, there was not a single document that both sides signed, but actually two fairly similar separate documents which Serbia’s President Aleksandar Vucic and Kosovo’s Prime Minister Avdullah Hoti signed individually. Equally important, the United States did not sign the documents either. In brief, what was signed at the Oval Office was simply not a bilateral agreement. When we examine the content of the two documents, there are several other points to take issue with.

Both Kosovo and Serbia agreed to implement a series of agreements (previously signed on Feb. 14, 2020) that are set to increase the rail and highway connectivity between the two countries and will link this infrastructure to a deep sea port in the Adriatic. Moreover, both parties pledged to work with the US on memorandums of understanding to “operationalize” the provision of loans required for small and medium-sized enterprises (SMEs) and additional bilateral projects, without actually specifying any. The implementation of these steps has long been hailed by Richard Grenell, Trump’s Special Envoy for Kosovo and Serbia and the architect of Friday’s Deal in Washington, as the “backbone” of the economic normalization between Belgrade and Serbia. According to Grenell, the 20-year fight between Kosovo and Serbia is only going to be solved through economic normalization, jobs for young people, and a growing economy. You can start talking about political issues and the ultimate goal of mutual recognition only after the economy starts to improve and trust is built between the two parties, so the argument goes. “How can you pretend like you are trying to make a final deal if the borders are neither open and there is no flight between Pristina and Belgrade for the business community to do an economic normalization? It is just foolish,” averred Grenell back in June 2020. In this respect, Kosovo’s commitment to join the “mini-Schengen zone” announced by Serbia, Albania, and North Macedonia in October 2019 seems to address Grenell’s concerns. However, the “economy-first-politics-next” logic to solve the long-standing fight between Belgrade and Pristina is flawed and deliberately overlooks several obvious points.

First and foremost, the primary obstacle to economic progress in both Kosovo and Serbia (but especially in Kosovo) is the lack of mutual diplomatic recognition, the lack of rule of law, and the rampant corruption and authoritarianism that characterizes the political landscape of both countries. There can be no serious long-term investment, and the brain drain from both countries cannot be stopped unless there are secure property rights, an unbiased justice system, and a level playing field that values merit and not connections. The prospects of achieving these will increase only if Kosovo first joins NATO and Serbia enters the EU, and these in turn are contingent on two political acts: the US pressurizing four NATO members (Greece, Romania, Slovakia, and Spain) to recognize Kosovo and Serbia’s recognition of Kosovo’s independence. Thus, it is political normalization that will bring in economic normalization and not the other way around. As Daron Acemoglu and James Robinson argue in their masterpiece Why Nations Fail?, it is inclusive political institutions that produce inclusive economic institutions. In brief, it seems that in the Kosovo-Serbia deal, the Trump Administration got the causal arrows the wrong way around.

Second, the commitment of both parties to work with the US Department of Energy on a feasibility study for the purposes of “sharing Gazivode/Ujmani Lake as a reliable water and energy supply” is vague at best and not compatible with Kosovo’s sovereignty. Gazivode/Ujmani Lake is the largest artificial lake in Kosovo and the country’s main water and energy supply. Only 22 percent of its 20 sq-km surface area lies within Serbia’s territory, whereas within Kosovo it lies in the Serb-majority municipality of Zubin Potok. The commitment to share this lake can only work to the detriment of Kosovo’s ultimate aim of being recognized by Serbia, infringes upon Pristina’s territorial/energetic sovereignty and as such was harshly denounced not only by the socialist Vete-Vendosja opposition party but also by Avdullah Hoti’s own coalition partner, the Alliance for Kosovo’s Future (AAK), led by Ramush Haradinaj.

Last but not least, even if the US plans for developing economic links between Kosovo and Serbia do pay off, it is doubtful whether increased trade with the tiny Kosovar economy will ever be of much interest to the dominant economy in the Western Balkans. If anything, increasing trade with Serbia will only worsen Kosovo’s trade deficit, which is already the highest in the region. Additionally, without first tackling the issues of rampant corruption and ensuring the rule of law, the international funds for investment and development foreseen in the deal will most likely end up in the pockets of politicians and thus will not provide any practical benefit at all for the society.

There are several clauses in the agreement which have absolutely nothing to do with normalizing economic relations between Kosovo and Serbia, and whose inclusion therein thus verges on the ridiculous. Such were the clauses according to which both countries agreed to work with the 69 countries that criminalize homosexuality “to push for decriminalization”; pledged to designate Hezbollah “in its entirety” as a terrorist organization, and to fully implement necessary measures to restrict Hezbollah’s operations and financial activities in their jurisdictions; and finally, the clause in which Kosovo and Israel agreed to mutually recognize each other and Serbia agreed to move its Embassy in Israel to Jerusalem by July 1, 2021. The clause entailing the mutual recognition between Kosovo and Israel is only in the document signed by Kosovo’s Prime Minister Hoti, whereas the clause whereby Serbia agrees to relocate its Embassy in Jerusalem is only in the document signed by Serbia’s President Vucic, and this is basically the only difference between the texts of the two agreements signed separately by Hoti and Vucic.

Seen in conjunction with the points raised above, it becomes clearer that what was signed in the Oval Office on Sept. 4, is not a bilateral agreement between Kosovo and Serbia, but rather a mutual commitment by them to serve Trump’s reelection purposes in the US’ November presidential elections, and also a commitment by them to align themselves with US foreign policy goals. Indeed, in the aftermath of the glitzy signing ceremony in the Oval Office, Trump tweeted “Another great day for peace with Middle East – Muslim-majority Kosovo and Israel have agreed to normalize ties and establish diplomatic relations. Well done! More Islamic and Arab nations will follow soon!” This tweet not only verges on the ridiculous, but also infuriated the socialist Vete-Vendosja opposition party and other Islamophobic groups in Kosovo who were quick to object that Kosovo is not an Islamic or Arab nation, but a strictly European and secular one.

This move may also end up damaging Kosovo’s relations with Turkey, (which has consistently championed the cause of Kosovo’s independence at various international fora), and most importantly with the EU. The Turkish Foreign Ministry in a written statement expressed “grave concern” over Kosovo’s potential decision to open its Embassy in Jerusalem and called upon the Kosovar leadership to refrain from acts that would prevent it from being recognized by other states in the future. Similarly, Brussels informed that the decision of Serbia and Kosovo to open Embassies in Jerusalem constitutes “a matter of great concern and regret” and urged both countries to align their foreign policy stances with the common EU position concerning the Israeli-Palestinian issue. Anyhow, at the end of the day, the two clauses concerning Kosovo’s and Serbia’s relations with Israel won Kosovo an additional recognition but, as the rest of the deal, do not create any binding commitment between Belgrade and Pristina. Indeed, sources close to Serbian President Vucic have already claimed that Serbia will not relocate its Embassy to Jerusalem if Israel recognizes Kosovo.

All in all, what was signed in the Oval Office on Sept. 4 clearly had the short-term goal of serving Trump’s reelection purposes and did not reflect any sort or long-term commitment by the White House to advance the Kosovo-Serbia dialogue. The Trump Administration hailed the agreement as “historic” and a “major breakthrough” – it is actually neither historic nor a breakthrough. The “deal” rests on a flawed logic and will not carry much water after November’s elections, regardless of the results. If Washington is really committed to advance the Kosovo-Serbia dialogue, it should work in close coordination with the EU and, as Edward Joseph, a foreign policy expert on the Balkans from Johns Hopkins, succinctly points out, should pressurize the four NATO and EU members that do not recognize Kosovo (Greece, Romania, Slovakia, and Spain) to do so. Such a move would clear the path for Kosovo’s NATO membership (given that the UN membership for Pristina is not possible due to the Chinese and Russian vetoes in the Security Council), would create a level playing field for conducting the negotiations with Belgrade, as the current field is heavily skewed in favor of the latter, and ultimately would pave the way for a comprehensive political agreement between the two neighbors.

Creating separate tracks for advancing the Kosovo-Serbia dialogue (as Richard Grenell has been doing over the past two years), with Washington dealing with economic issues and passing the ball to the Brussels when it comes to high-politics, will not solve anything and will only perpetuate regional instability. The externally-engineered toppling of Albin Kurti’s reformist coalition government in the midst of the COVID-19 pandemic in Kosovo (March 2020), Serbia’s transformation into a fully-fledged authoritarian state, and the ill feelings between Washington and Brussels concerning Kosovo should serve as a reminder that unilateral foreign policy moves in the Balkans can have disastrous consequences.