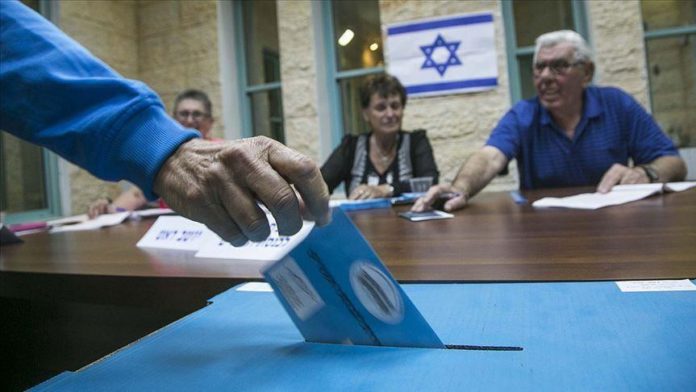 Neither of the two main political camps has reached the magic number of 61 in the 120-member Knesset (parliament) to claim power, according to the results announced by the Central Elections Committee (CEC).

The results have left both camps struggling to lure partners and form a coalition after the fourth election held on March 23 in the last two years threw a fractured verdict.

This has made Jewish right-wing Yamina and the United Arab List (Raam) kingmakers as their tilt will decide which block will form the next government.

In the coming days, the results will be presented to President Reuven Rivlin who will hold consultations with the parties before inviting one of them to form a government. The process may take even two months.

Speaking to Anadolu Agency, Mohamed Mohsen Watad a journalist specialized in Israeli affairs, said the current results reflect the hegemony and control of the Israeli right and Netanyahu’s control over this camp.

“Netanyahu has proven that he is the leader of this camp without any rival or competitor. This hegemony in Israel will likely continue for many years even if Netanyahu is absent from the political scene,” he said.

Netanyahu is facing serious corruption charges and many analysts believe an end of his political career in case of being convicted in charges were filed against him.

Watad said Netanyahu remains the most fortunate politician, expecting that he will lead the next government by engineering defection or convincing any small party from the opposing camp to join him.

“The parties opposing Netanyahu collectively won 57 seats, and it is difficult for them to form a government unless they receive support from the two Arab lists [10 seats] and this is unlikely to happen,” he said.

Israeli TV channels are suggesting that Netanyahu might seek the support of the Raam headed by Mansour Abbas.

Abbas did not completely shut the door and told Israeli channels that his party was not in anybody’s pocket.

“I am ready to talk to everyone,” he said.

But Miki Zohar a leading deputy of Netanyahu’s party ruled out forming government in alliance with Abbas.

Nihad Abu Ghosh, a journalist based in Jerusalem, said while Likud has failed to secure enough seats, the opposition camp also has nothing in common except opposing Netanyahu.

He said that Netanyahu’s fortunes now rest on two small parties, the Yamina extreme right-wing party headed by Bennett, and the Religious Zionist party, which impose strict political and organizational conditions on him.

He said the fourth election has not settled problems, even has made them more complex. He predicted that there was a chance to hold the fifth round of elections within months or by the end of this year at the latest.

He said the low voter turnout in Arab areas led to division in Arab parties. He also disclosed that some Arabs voted for Zionist parties, which will have an impact not only on politics but on the civil and social rights of the Arab population living in Israel.

Agreeing that the election results reflect the continuing political crisis in Israel, Muhammad Abu Allan, a researcher, and political blogger, said the formation of a stable government was still a distant dream. He said even if the government is formed, it will remain fragile and susceptible to political winds.

He also predicted the conduct of the fifth election, unless there are any surprises and fundamental changes in the mood of parties in the two major camps.

According to the CEC, as many as 67.2 % (4.4 million) voters came out to vote in the fourth election held in the past two years.

After the fractured verdict thrown by the April 2019 elections, no candidate was able to form a government, which led to another election in September. But there was no end to the deadlock.

As a result, the third election was held in March 2020. After strenuous negotiations, a government was formed in May. But soon a political deadlock forced the dissolution of the Knesset paving the way for the fourth election.