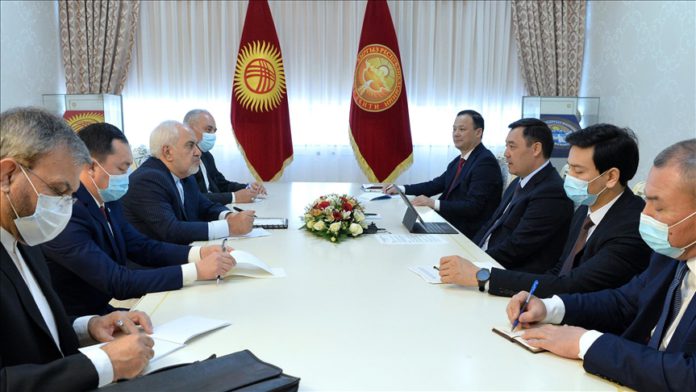 *The writer is a UK-based analyst and has worked with universities in three Central Asian countries.

The Iranian Foreign Minister Javad Zarif’s recent five-day tour to the five Central Asian countries was aimed at reminding his country’s relevance as key transit and trade outlet for the region.

While trying to combat the constraints imposed by long years of sanctions, Zarif’s trip from April 3-8 gave enough indications that Tehran is aspiring to assume the role to connect landlocked Central Asian states to international waters. It is apparent that Iranian influence in Central Asia is not considerable enough, claims Igor Pankratenko, from the Russian Centre of Strategic Assessment and Prognosis. Over the past, many years, not only several existing Iranian projects have been curtailed, but trade has also reduced to a minimum, leading to the decline of Tehran’s political influence in the region.

Iranian commentator Hassan Beheshtipour points out that one key obstacle to the development of Iran’s relations with Central Asian countries in recent years apart from the sanctions was President Hassan Rouhani’s government’s approach, which did not put Central Asia in its foreign policy priority.

Russia prefers that China’s Belt and Road Initiative (BRI) should pass through its territory to attract the infrastructure investments and seek sizable share in the form of transit from trade moving from China to Europe and vice versa. This is one of the reasons for the renewal of the trans-Siberian railway and road project. Another expectation on Russia’s part is that the Chinese goods that will arrive in Kazakhstan heading to Europe should pass through its territory using the northern route instead of the southern route.

Despite facing economic difficulties, Zarif reminded that neighbors are a priority for his country and explored outlooks for economic cooperation, the development of trade relations, and options for future advancement of new development projects. The Speaker of Iranian Majlis (parliament), Mohammad Baqer Qalibaf claimed that if Iran’s latest agreement with China works, then the wall of sanctions that the US has built against Iran will face a big dent. Moreover, this wall could collapse altogether if Iran joins the Eurasian Economic Union (EAEU) as a permanent member.

In Tashkent, the Iranian foreign minister discussed the prospects of making effective use of Iranian ports and the development of the Uzbek-Turkmenistan-Iran-Oman transport corridor. The issues of transportation and logistics projects were a central part of discussions of the Iranian Foreign Minister since Iran is aiming to connect with China by land through Central Asia.

In Tashkent, the issue of building the China-Kyrgyzstan-Uzbekistan railway line, essential for Iran, was also discussed. Iran has shown interest in it since this track will connect the Uzbekistan-Afghanistan-Iran corridor. A part of this project connects the Afghan cities of Mazar-i-Sharif and Herat with the Iranian port of Chabahar.

He also told his hosts in Central Asia that Iran shares many goals with them in terms of regional stability and nuclear disarmament. His visit also pursued calibrating Iran’s position on aspects of mutual interest concerning regional security especially efforts for promoting the peace process in Afghanistan.

“In these meetings, regional issues, especially the Afghan crisis, were also discussed stressing the need to respect the will of the Afghan people and their achievements, the need for ensuring continued democracy and ethnic and linguistic balance in the country’s political future,” Zarif said in Astana.

He said peaceful use of the Caspian Sea was discussed with Kazakhstan, which also endorsed Iran’s inclusion in the EAEU, which is an economic union of states located in Eastern Europe, Western, and Central Asia.

Iranian foreign minister said building railway and joint transit routes to connect Iran and Kazakhstan and other neighbors were also explored during the trip. He said Kazakhstan’s presence in the Iranian border city of Incheh Borun in the Golestan province, Bandar Abbas, and Chabahar ports are valued by Tehran. He said his country will be happy to serve as a path for Kazakhstan to reach international waters.

During the visit, Zarif expressed Iran’s readiness for promoting cooperation in areas including facilitation and expansion of trade, expansion of transportation routes, strengthening of tourism, and utilization of technological and human capacities, especially of the youth. During the trip, it was also agreed to realize existing capacities for a comprehensive expansion of relations.

At least 3 journalists killed by Myanmar junta since December: Report