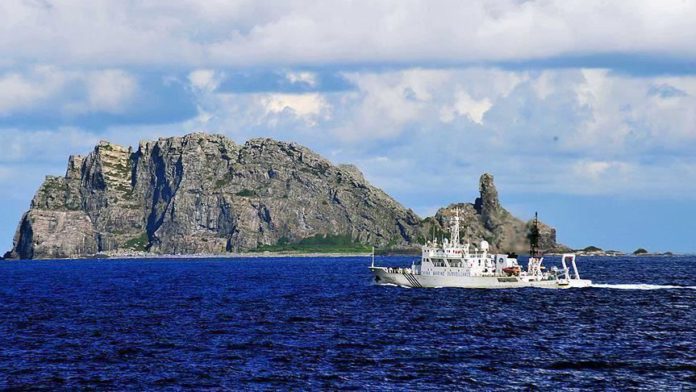 The writer is PhD candidate at the Turkish National Police Academy. His research mostly focuses on the US-China Relations and China’s Foreign Policy.

Known as China’s “maritime militia”, fishing boats maintain their place at the top of the agenda as a result of the developments in the South China Sea. Especially the Pentagon’s announcement in the last year that these boats would be treated as “warships” became an important sign that the tension would rise in the South China Sea.

It is stated that these boats, described as China’s “third naval force”, are reportedly acting in coordination with the Chinese Naval Forces and the Chinese Coast Guard. While China denies the allegations, some experts insist that these fishing boats are military elements.

The Philippine army detected 275 ships in the Sandy Cay area near Thitu Island last year. Some experts interpret this approach “as guerrilla war at sea”. China’s ambassador to the Philippines, Zhao Jianhua, however, disagrees and denies the allegations, asserting that the boats are nothing more than fishing boats and that they “do not have any weapons in any form”.

Experts advocate the idea that these “militias” are used to promote strategic objectives such as highlighting regional claims, conducting reconnaissance activities and complicating access to disputed areas. Since many such boats are equipped with satellite navigation, they can track and transfer locations, while collecting intelligence at sea reporting them to various sources.

In fact, according to Erickson and Kennedy [1], the militia boats have the Chinese BeiDou navigation satellite system with a tablet screen that allows crews to monitor other units, send text messages using Chinese characters. An article by James Kraska and Michael Monti, The Law of Naval Warfare and China’s Maritime Militia [2], published in 2015 is quite enlightening since it provides a legal perspective to the issue. According to Kraska and Monti, these militias are a well-equipped (trained) fishing boat network organized by China that helps with more intelligence gathering and communications, generating useful information for the navy’s goals.

China’s insistence on utilizing fishing boats is based on a regulation under the law of naval warfare that fishing boats shall be protected unless they are involved in a war. According to Kraska and Monti, China is running the world’s largest fleet of civilian fishing boats to support its geopolitical claims in the South China Sea. Referred to as the “Hybrid Civilian Naval Forces”, these militias also play an important role in promoting coercive maritime diplomacy against Japan and Vietnam.

It is estimated that there are 200,000 fishing boats in China and 14 million people are employed in this sector. However, there are allegedly around 23,000 fishing boats used for the above-mentioned purposes. Maritime militias also provide logistical support to Chinese warships. For instance, the boats are also allegedly used to transfer construction materials to build artificial islands in China’s South China Sea (having carried at least 2.65 million tons since the 1990s).

In June 2012, He Jianbin, a director of the state-run Baosha Fishing Corporation in Hainan province, called [3] on the Chinese state to turn fishermen into Chinese militias in an interview with the Global Times:

Although these views are interesting, they are not an official discourse. So far, no concrete evidence has been found that these fishing boats have been “armed”. Therefore, considering such boats as “warships” seems to be an assessment that goes beyond its purpose.

As tensions with Vietnam, the Philippines, Malaysia, Indonesia and Brunei escalate, China tends to adopt a non-coercive –so-called– “gray method” of using maritime militias without the risk of open conflict. This also allows China to fortify its hegemonic approach to the region in peacetime.

China has been using the same strategy against Japan over the dispute regarding the Senkaku Islands.

As a matter of fact, on Sept. 8, 2010, a Chinese fishing boat crashed into two Japanese Coast Guard ships near the Senkaku Islands. The ship’s captain, Zhan Qixiong, and fourteen crew members were detained by the Japanese Coast Guard. The marines were released two weeks later, yet the incident severely damaged China-Japan relations.

It would be necessary to remember the book “Unrestricted Warfare” published in 1999 by two Colonels Qiao Liang and Wang Xiangsui of the Chinese Army, describing the definition of war as “using all means, including armed forces”. Examples and references about Sun Tzu are noted in Liang and Xiangsui’s book, where the two authors analyze the transformation of war in the context of globalization and argue that a key is needed to solve all the challenges intertwined with globalization, while this key must unlock all the locks.

This key must also comply with all levels and dimensions, from strategy and operational techniques to tactics, and must also be in accordance with politicians and generals. Since the book concludes that this suitable key was “unlimited warfare” in 1999 demonstrates that China endeavored to adapt to strategically transformed conditions.

This brings to mind hybrid warfare. Hybrid warfare refers to the use of unconventional methods as part of a war-fighting approach. These methods are aimed at disrupting and disabling the actions of an adversary, without open hostilities.

China believes that the militia structure of fishing boats can be a less provocative tool to support the strategic target for regional hegemony. For this reason, it stands out as an important instrument for both avoiding international sanctions and maintaining regional interests.

However, China’s maritime militias are running a risk of blurring the line between fishing boats and naval forces. Therefore, accurate assessments under international maritime law are of utmost importance to future disputes.

Claiming that these fishing boats are a surprise element before other actors, and are thus used in grey zone operations, a number of experts purport that the boats are surrounding the area like a “cabbage”. In a way, they can be defined as a strategy developed for the infiltration of military elements into disputed areas.

The activities of these unidentified military elements can be evaluated in a sense within the fourth-generation war concept or in terms of a hybrid war approach. Beijing’s maritime militias are in a position to play an important role in possible future naval warfare in the region. At least this is what the findings show.

Given the Pentagon’s statement, “we will treat them like warships”, it is possible to say that the line between fishing boats and warships is becoming increasingly blurred, and that the hybrid war is increasingly penetrating the region of conventional warfare.

These fishing boats may come up in a possible conflict between the US and China in the South China Sea. Therefore, clarifying their legal positions would eliminate any dangerous misunderstandings between the two major powers.

Morocco extends state of health emergency for another month