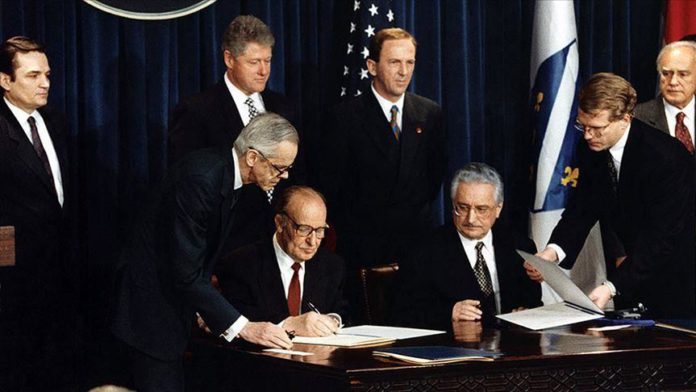 *The writer is an associate professor at the Faculty of Political Science at the University of Sarajevo.

Almost two years ago, I was struggling to explain my country’s complex political system to visiting American students. “Why is your political system so complicated?” “Why can’t you all just get along?” Indeed, how do you explain why a country with a population of less than three million has three co-presidents, more than 130 ministers, fourteen parliaments, hundreds of representatives and their staff? An unlikely solution dawned on me: to explain Bosnia through a counter-factual history of America. After all, the Dayton Peace Accords which produced this complicated system was the legacy of the chief American negotiator Richard Holbrooke.

Differences between the genocide against Bosniaks in the early 1990s and the American Civil War abound but let us proceed with a thought exercise. In 1861, as Abraham Lincoln fought off the Secession, California and other states on the West Coast soon embarked on their own separatism. Lincoln proceeded to suppress both rebellions. An arms embargo was imposed on the Union Army by outside powers lest its arming should escalate the fighting. A bloody war resulted in a stalemate with neither army able to assert itself completely nor being completely defeated. In 1865, Confederate forces were not defeated in the American Civil War. An external power concerned about stability in North America charts the way towards peace.

Abraham Lincoln was essentially coerced into a loosely defined power-sharing federation with General Robert E. Lee and the Western secessionists. To ensure that the North does not outnumber the Southerners or the Westerners, the erstwhile secessionists get a veto over US domestic and foreign policy. Lincoln, Lee and the West’s leader become co-presidents. The military stalemate is built into the new Constitution through a complex web of checks, balances and vetoes. This political system is rife with discrimination.

Now fast-forward almost a hundred years to 1954. Following the Supreme Court ruling in Brown vs. Board of Education, General Lee’s political heirs openly declare that the ruling is not binding and that they have no intention of honoring it. President Dwight Eisenhower’s attempt to order the 101st Airborne Division into Little Rock, Arkansas is vetoed by the erstwhile secessionists. Brown vs. Board of Education is on the books but not enforced.

In this counter-factual history, Lincoln had to fight off two Secessions simultaneously, was then stuck with Articles of Confederation without the Constitutional Convention in Philadelphia, and that secessionist leaders wielded veto power in the United State of America. What would have become of America?

This thought exercise actually happened in Bosnia. The wars of Yugoslav succession began in 1991 as the multi-ethnic socialist country dissolved. Serbia’s strongman Slobodan Milosevic unleashed expansionist wars against Yugoslavia’s successor states Slovenia, Croatia and Bosnia. The most violent war engulfed Bosnia where the country’s ethnic make-up proved fertile ground for Milosevic’s proxies. By imposing an arms embargo, the UN effectively prevented Bosnia’s right to self-defense. The genocidal violence culminated in the worst mass slaughter in Europe after the Second World War. In the aftermath of Srebrenica, the Clinton Administration embarked on a new strategy of ending the three-and-a-half-year war in Bosnia.

The Dayton Peace Accords comprises a series of trade-offs. Bosnia remained undivided but heavily decentralized. The country kept its external borders but was weakened internally. Serb and Croat secessionism failed to achieve independence. As a compensation for remaining within Bosnia, Serbs and Croats get vetoes in decision-making. The vetoes, or the mere threat of vetoes, have been used, misused and abused for twenty-five years, and still counting. The complex system ensures that only lowest-common denominator decisions are passed.

Notwithstanding the differences, let us explain the parallels. Alija Izetbegovic was Abraham Lincoln. The Bosnian army was the Union Army. Republika Srpska was the Confederacy, except that it was not a state that existed before secession. Republika Srpska’s secession and genocidal campaign proceeded simultaneously. Radovan Karadzic and Ratko Mladic were the incomparably more brutal versions of Robert E. Lee. The Bosnian Serb Army was the incomparably more vicious version of the Confederate forces. Mate Boban who led the Croat separatists was essentially a General Lee on the West Coast. Today’s Dayton Peace Accords are akin to having Articles of Confederation plus in-built vetoes circa 1890. Bosnia can’t proceed to its Constitutional Convention because both Lee’s political heirs block any progress. Why can’t you all just get along? ​​​​​​​

Now let’s come to 1954. The Bosnian Constitutional Court’s 2019 decision that celebrating the anniversary of the commencement of the genocidal project is unlawful is ignored. The January 9 “celebrations” continue. Why can’t the state enforce its highest court’s decision? Two reasons: Unlike in the US in the 1950s, (i) there is no Dwight Eisenhower who can (ii) order the 101st Airborne Division to enforce the ruling. As both American and Bosnian history shows, progressive court rulings are not self-implementing. That was not the case either in Little Rock, Arkansas in the late 1950s or in Bosnia in 2019.

The Dayton Peace Accords was the best peace deal in 1995 compared to the European mediators’ proposals to partition Bosnia cloaked in the language of polite-sounding decentralization. What Dayton brought was peace and an American military and financial commitment that ensured the country did not slip back to violence. While peace was the most sought-after commodity in the 1990s, the peace agreement has come to be seen as insufficient. A major change is both necessary and seemingly impossible. The bloated bureaucracy that the complex power-sharing established is a drain on this Balkan country’s resources. Financial investment is hampered by convoluted procedures. Many levels of governance enable rampant corruption.

To paraphrase Tolstoy, every nation in Bosnia is unhappy in its own way. Bosniaks did not get a strong state but they had to settle for a centrally weak, multi-layered one. Serbs and Croats failed to achieve their separatist ambitions and had to settle for autonomy and vetoes in post-war Bosnia.

Revising the Dayton agreement has been floated as an idea for some time in Bosnia but to no avail. The US, the main benefactor of the peace deal, has largely removed itself from the Balkans over the past decade. The European Union lacks the resolve to tackle such a complex issue. The return of Russia in Europe indicates that renegotiating the current agreement would be more complicated than in November 1995. Finally, it is doubtful that all political leaders would be happy with major revisions to Dayton. Revising the Dayton agreement would result in Rumsfeldian “known unknowns”. A new frozen conflict is shaping up.

UK premier urged to resign as findings of probe into rule-breaking...