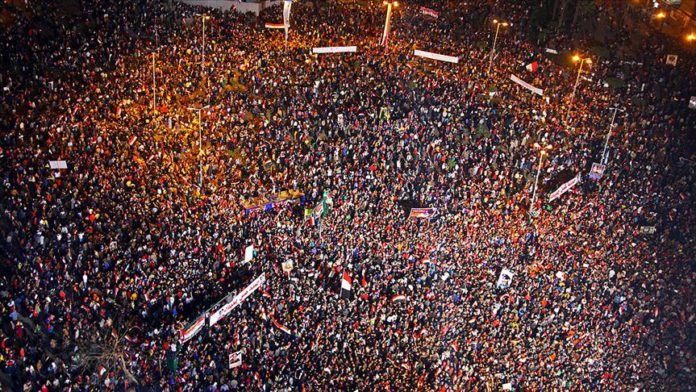 Today, July 3, 2020, marks the anniversary of the military coup carried out in Egypt seven years ago.

The years that passed since have taught us a great deal. It goes without saying that human beings are forgetful, yet there are events we should not forget for the sake of our countries and tomorrows, events that could even *mean a betrayal of future principles* were we to exclude them from our minds. Among these significant events is the military coup in Egypt. How this coup took place, the process leading up to the coup, who plotted this coup, and how it trampled on democracy are realities that we should never forget.

Many of those who laid the groundwork leading to the coup today live in shame. However, they should know that generations to come that carry their names will also live out their lives under the shadow of this shame. Those who today see themselves as mighty will see the days when people call them to account. Take a look at Turkey, where those who seized control of the government on Sept. 12, 1980, appeared before the judiciary three decades later and paid the price for betraying their country. The name of Kenan Evren, the chief of General Staff during the coup who then became president, was erased from the streets and avenues. He lived out his last years in shame and disgrace.

For years, Turkey has also been subject to military coups by traitorous networks within the army and their supporters in the media, business, and civilian life pursuing their various interests. In the military coup of May 27, 1960, Prime Minister Adnan Menderes – the man who ushered in a new age in Turkey with hundreds of innovative projects in many fields including industry, agriculture, health, and transportation – as well as Finance Minister Hasan Polatkan and Foreign Minister Fatin Rustu Zorlu, were all executed.

The putschists put forth pseudo-reasons. They, and their supporters in the media, sought to convince people that it was not a military coup but a revolution. Yet this was all in vain. For years the people shed tears for the blameless prime minister and his two colleagues. Today the coup plotters and their children live in shame. They even hide their names. On the other hand, years later the tomb of the late prime minister was brought to Vatan Street in central Istanbul. It is an irony of fate that Vatan Street was also built by late Prime Minister Adnan Menderes.

The worst form of democracy is better than any military coup. We Turks have acknowledged this by living through two coups, two military memorandums, and a coup attempt. Coups have cost Turkey and the Turkish people untold decades. This experience lies behind the public’s wholesale rejection of the coup attempt of July 15, 2016. Unfortunately, now Egypt is undergoing this experience in its most vital form. Similar to what happened Turkey in 1960, the military and anti-democratic circles supporting the coup say it is a popular revolution, not a coup. That is a brazen lie, a truth that will be better understood once democracy prevails in Egypt.

The peoples of modern countries are well aware that it was a military coup. It is nonsensical how the Egyptian media, a putschist propaganda tool held in ill repute worldwide, tries to deceive the people. Everyone clearly sees the facts. The reports of international human rights groups suggest what happened in Egypt was a military coup.

It is hugely important that we analyze the process leading up to the 2013 coup. It is clear that the coup was not planned in Egypt but in the US and European capitals. The decision to remove from power Mohamed Morsi, and thus the Muslim Brotherhood, was taken in 2012 shortly after he was elected president. This happened because if this measure had not been taken, the winds of democracy to shake all Arab and Gulf countries would have been unstoppable. The groundwork had to be laid in this regard and an internal opposition was needed. A platform called the National Salvation Front was assembled.

The front consisted of three heavyweights: Egyptian Popular Current leader Hamdeen Sabahi, Amr Moussa, a foreign minister from the Mubarak era, and Mohamed ElBaradei, former head of the International Atomic Energy Agency. Wealthy Egyptians and media outlets were the greatest supporters of this trio. As in Turkey, leftist groups were the hard-core supporters of the coup.

The protests launched on Nov. 22, 2012, had a single goal: Removing Morsi and the Muslim Brotherhood from government at all costs. That 51.73% of the people had voted for him meant nothing in their eyes. When the elected president called for a national dialogue meeting on Dec. 8, 2012, they all boycotted it. Their months-long project of escalating tension finally bore fruit and culminated on July 3, 2013 when the army announced it had seized control. The coup was done, and the president and government ministers elected by the vote of 51.73% of the people were removed, with Morsi announcing he did not accept the coup. Then he was detained and put under house arrest.

The people of Egypt took to the streets to protest the coup. Democracy watches began in the largest squares of Cairo. The Egyptian army wanted the people to clear the streets and go home. However, the people, protecting their not-yet-year-old democratic experiment, rejected the coup. It is unfortunate that these democracy watches were not supported by any Western country.

When the calendar read Aug. 16, the Egyptian army opened fire on the defenders of democracy and committed a wholesale massacre. The death toll is said to be over 2,000. Human Rights Watch gave the official count at 930. One detail is noteworthy here, namely that the Egyptian army was not alone while indiscriminately firing on civilians. Some of Egypt’s secular elites also took part in this massacre with weapons in their hands. The clearest example of this is the infamous photo of movie actor Tarek al-Mahdi opening fire with his weapon.

The loudest applause for the coup came from the US, Europe, Saudi Arabia, the UAE, and Israel. It was as if they all took a deep breath and then took a break from their preaching about democracy.

All of these countries also supported the defeated coup attempt in Turkey of July 15, 2016. When the people rose up to put a stop to the coup, for days these countries were reduced to silence. The same countries today support the putschist militant Khalifa Haftar in Libya.

The past seven years have surely taught us many lessons. The greatest is perhaps how the same Western countries who lecture loudly about democracy and freedom worldwide suddenly lose their principles when it comes to their interests or Israel’s. Over the past seven years, we clearly saw that their advocacy for democracy is an utter sham.

The greatest lesson we should take away from this is that we should always protect democracy, no matter the cost.