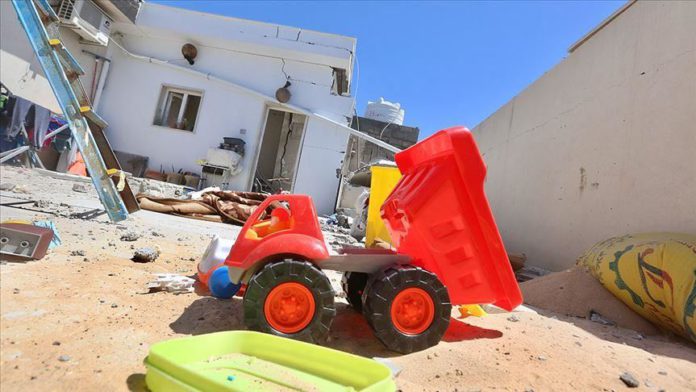 The writer is a deputy researcher at TRT World Research Centre based in Istanbul, Turkey.

Thousands of people across Libya, and particularly in Tripoli, continue to suffer loss of life and property, combined with lack of food, water and essential services, owing to the vicious methods Haftar forces have been employing against civilians.

Haftar’s self-styled Libyan National Army (LNA) has been seeking to seize Tripoli for 13 months while the military aid that Turkey has provided this year to the internationally recognized Government of National Accord (GNA) has enabled it to achieve significant gains on the ground.

Last month, the UN-backed government forces retook a string of towns in the northwest from Haftar’s forces, restoring their control between Tripoli and the Tunisian border. The militias of Haftar suffered heavy losses during the process. To avoid total defeat, Haftar was forced to offer a truce.

To blackmail their way toward a truce, Haftar’s forces continue to attack residential areas and hospitals. They most recently attacked the Mitiga airport, the only functioning airport in the capital. Four people were killed, among them a five-year-old girl. These recurrent attacks cause considerable civilian casualties and damage to properties and infrastructure. Amidst efforts to contain the COVID-19 pandemic in a war-ravaged region, there are such inhumane tactics at play.

Recently, Tripoli’s water supply was cut off following a raid on the country’s water sources serving Tripoli. In the first week of April 2020, the water network was disrupted in Shwerif, a region 350 kilometers southeast of Tripoli under the control of Haftar’s forces. As a result, “more than two million people, including 600 thousand children who live in Tripoli and surrounding towns and cities are suffering from water cuts,” Yacoub El Hillo, the UN humanitarian coordinator for Libya, said in a statement.

The U.N. Libya mission condemned the recent bombings, calling them “indiscriminate attacks”, which it said were “mostly attributable” to pro-LNA militias. The U.N. also said four-fifths of the 130 civilian casualties recorded in the Libyan conflict in the first quarter of 2020 were directly caused by the LNA’s indiscriminate shelling.

Turkey and Italy stated that the area around their embassies in Tripoli had been shelled. As a result, the Turkish government warned warlord Haftar against attacking diplomatic missions after positions near Turkish and Italian missions were hit earlier this week.

The current circumstances are also a result of the European Union’s failure to develop a coherent plan to find a fair and sustainable political solution. For instance, France’s behavior is a glaring example of this. Although Paris officially recognizes the GNA as Libya’s legitimate government, it also sides with Haftar by providing him with vital political support and military aid.

The Turkish government is strongly criticizing the U.N. for what it says is the U.N.’s failure to move against Haftar and his supporters.

For instance, the UAE has been playing a pivotal role since Haftar began his offensive last year in April, providing significant military support such as shipments of arms and supplies and a series of UAE-linked drone strikes on Tripoli. Last year, a drone strike in the southern Libyan town of Murzuq killed at least 43 people, and the UAE was accused of being behind the attack.

A few months ago, militias loyal to Haftar took over large export terminals and cut off significant pipelines in January, aiming to choke the UN-backed government of considerable revenues, which is brutal punishment. People in Libya are suffering deeply from a war, large-scale electricity, water, and gas cuts, and there is limited funding in the government treasury for the oil-rich Libya to pay for imports, such as medical supplies, which will surely make it harder to battle the COVID-19 pandemic.

According to the U.N. , in the last year alone, over 2,000 people have died. In addition, hundreds of civilians have been wounded, 150 thousand people have been displaced from their homes along the Tripoli frontline and are looking for temporary shelters. Refugees and migrants are the most vulnerable groups in the war.

Some of the foreign powers in Libya apparently favor an armed conflict over political processes, as conflict enables them to wield greater influence on the ground to protect their long-term interests.

As the U.N. seeks to find a political solution to the Libyan crisis, it should take stock of the overwhelming impact of the policies of France, the UAE, Egypt, and Russia on Libya.

These policies have exacerbated tensions and instability within an already fragile political landscape. By working with Haftar rather than supporting the legitimate government, these countries have failed to meet international obligations.

The United Nations Security Council (UNSC) is deeply divided and have not been able to agree even on a resolution calling a ceasefire in Libya.

The ongoing war has shown no signs of abating, with diplomatic efforts seemingly divorced from the realities on the ground. The scale of violence against civilians exhibited by Haftar’s forces impedes any possibility for a return to a political process.

While Haftar is on the back foot, his backers, primarily the UAE, are doubling their support to the renegade general in order to change the military dynamics on the ground.

If the international community continues to sit on the fence, allowing Haftar’s backers to continue supporting his war crimes, this conflict will likely expand beyond its current location.