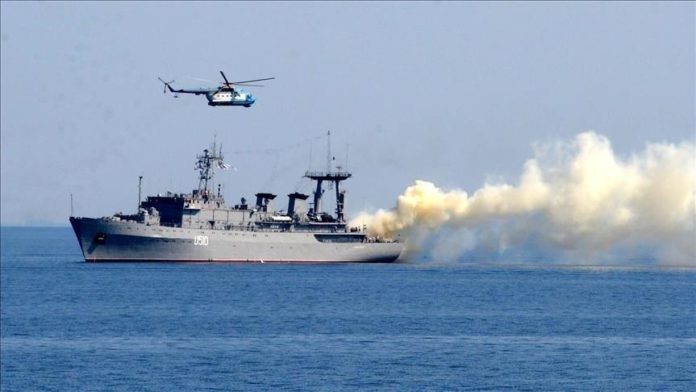 The Black Sea has been home to countless civilizations and tribes in every period of history, becoming a region of geopolitical and geostrategic importance in many aspects, particularly economy, trade, and transportation.

This has made the Black Sea one of the main areas of competition for global and regional powers throughout history.

When discussing the post-Cold War Black Sea region, the concept of the “Extended Black Sea” comes to the fore with the effect of the Black Sea Economic Cooperation Organization (BSEC) as well as the new “Great Game.”

To ensure the security of the Black Sea after the Cold War, mechanisms of organizations such as the European Union, NATO, and the Organization for Security and Co-operation in Europe (OSCE) were launched, while the BSEC, Black Sea Naval Cooperation Task Group (BLACKSEAFOR), Black Sea Harmonization Operation (new structures such as KUH) were also created.

The US, which aims to maintain its hegemony in the “new world order” after the collapse of the USSR, sees the Black Sea, the only sea that it cannot penetrate, as a “vital interest area.”

The main idea of ​​the “Grand Chessboard” and the “Extended Black Sea,” which also overlap with American strategy, is to prevent potential rivals of American hegemony from becoming real rivals and the formation of regional alliances.

NATO plays an important role in the construction of a “complete and free Europe” through membership or cooperation; in other words, in integrating the region with the Western system.

According to the US and UK, NATO is the main provider of security in the Euro-Atlantic region, which also includes the Black Sea, so the Black Sea should be turned into a NATO lake.

In addition to NATO, the US, UK, and other NATO states are also trying to prevent Russian influence in the region through aid programs and “colorful revolutions.”

The discourse of “ending regional conflicts” and “energy security” are mainly aimed at limiting Moscow’s control.

For Russia, the Black Sea basin holds increasing importance as a vital area of ​​interest.

The fact that Russia increased its presence and prowess in the Kerch Strait and Azov Sea completely changed the balance of power, both politically and militarily, in the Black Sea basin.

Moscow’s aggressive and expansionist policies in the region have, in a way, countered NATO and Western influence.

Russia, with its historical imperial strategy, is trying to maintain control by displaying strength in the region, as it did in when it wielded power in the past.

More than 28,000 navy personnel were also sent to the region.

After the annexation of Crimea in 2014, the Black Sea Fleet in Sevastopol/Akyar, S-400 air defense systems, Kh-35U missiles, Su-24 and Su-30SM warplanes and Ka-27/29 helicopters were deployed to Crimea.

In a sense, Russia is trying to curb the influence of Western countries in its hinterland, including control of its “near surroundings,” as required by its Neo Eurasianism policy.

This is the reason why the 2008 Russia-Georgia War, the 2014 Russia-Ukraine-Donbass Crisis, and the occupation and subsequent annexation of Crimea took place.

By preventing Georgia and Ukraine from becoming NATO members, Russia in a way prevented NATO’s absolute dominance in the Black Sea.

The coastline in Russia’s current domain has expanded considerably; it achieved a clear advantage in the region with the modernization and growth of its navy and land forces.

This fierce competition in the region has transformed the perception of security in the Black Sea and led to a quite delicate power balance in the region.

However, Russia’s aggressive and expansionist policies have other reasons beyond NATO, mostly related to the regional cooperation areas it has established with countries such as China, Syria, Iran, and Turkey.

The powerful states in the region, Turkey and Russia, have become allies by renewing their security policies in the Black Sea.

Western countries, especially the US and UK, stand against Russia.

Thus, the rivalry between the US, UK, and Russia seen during the Cold War continues in the new era in the Black Sea.

As a result of the strategies and vital interests mentioned above, the Black Sea has been the scene of new tensions in recent days.

In a statement on June 23, Russia’s Defense Ministry claimed that a British warship, HMS Defender, violated the border in Felenk, southwest of Crimea, which was illegally annexed by Russia.

The statement said a Russian ship protecting the border fired two warning shots at the British vessel and a Russian jet dropped bombs in its path minutes later.

It was reported that more than 20 Russian jets and two Coast Guard ships followed the British warship passing near Crimea.

British authorities denied Russia’s claim that warning shots were fired at the vessel or bombs were dropped in its route.

The UK’s Defense Ministry claimed the HMS Defender made a harmless passage through Ukrainian territorial waters in line with international law.

The Russians urged London to examine the movements of the ship’s crew, telling British officials that the vessel had trespassed over Russian borders.

The Defense Ministry described the British destroyer’s “dangerous action” in the Black Sea as a violation of UN conventions.

Moscow also announced that it would summon the British ambassador over the issue.

These events were perceived by Russia as a rehearsal for a possible NATO operation in the Black Sea, which is in Russia’s sphere of influence, and, in a sense, a test to see how Russia would respond to such an eventuality.

Amid the increased activity and tensions in the warming waters of the Black Sea, all eyes turned to Russia’s President Vladimir Putin.

Putin, who stands out as a leader who never backs down, as he showed during the Ukraine crisis, said the British warship entered Crimea illegally to see up close how Russian forces would react.

He went on to say that the move was made in coordination with the US.

To convey the extent of the situation to the world, he said: “Even if we sank this ship, it would still be difficult to imagine that the world would be on the brink of a third world war.”

In conclusion, it can be said that the US and UK aim to integrate the Black Sea region into the international capitalist system and rely on the discourse of a “new world order” and “a complete and free Europe.”

As in the case of Georgia and Ukraine, NATO also plays an important role in the envisioned integration of the region with the Western system, through membership or cooperation.

Russia, on the other hand, is developing a strategy to ensure the Black Sea remains within its sphere of influence and does not become a NATO lake, by implementing the Montreux Agreement in every way in the Black Sea, and is engaged in a kind of a great power struggle.

In fact, Putin’s policy is based on Petro’s testament; the policy of entering historical warm waters, preventing rivals from penetrating his immediate surroundings, and establishing dominance.

The Black Sea region continues to be an important area of competition.

It is vital for the stability of the region that this rivalry and the threat it poses does not grow to a point where it eventually pushes the world to the brink of a new war, and that these issued are resolved through diplomacy and in a calm manner.

But the waters of the Black Sea seem to have warmed up quite a bit.

The fact that Russia was identified as the primary threat at the recent NATO summit only serves to confirm this thesis.