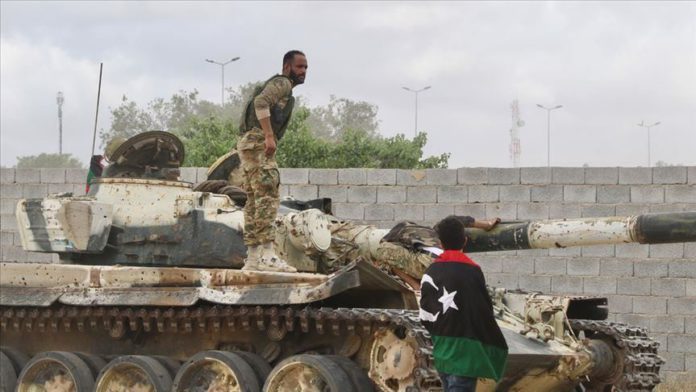 The writer is a Deputy Researcher at the TRT World Research Centre. He is a PhD researcher in North African Studies at the Institute of Arab and Islamic Studies in Exeter with a particular focus on Turkish Foreign Policy.

Until December last year, Haftar maintained a military edge over the legitimate government of Libya thanks to significant support from a number of countries, including Egypt, the United Arab Emirates (UAE), Russia and France. Turkey signed a military pact with the UN-backed Government of National Accord (GNA) in November 2019, and since then it has provided significant military support, first and foremost armed drones and air defense systems, which have shifted the balance on the ground in Libya.

With vital support from Turkey, the forces aligned with the UN-backed government have, since April, inflicted a steady stream of losses on warlord Haftar that finally led to the defeat of his militias in western Libya. The UN-backed forces are now fighting against Haftar’s self-declared “Libyan National Army” (LNA) in Sirte, a coastal city and a gateway to the oilfields and the east.

These defeats represent a significant blow to Haftar and his backers more than a year after he launched an offensive on the capital in April 2019. As if to prove the significance of the blow, the French Foreign Ministry accused Turkey of playing an “aggressive” role in Libya. This baseless accusation cannot hide the fact that the warlord is on the back foot.

Dr. Ibrahim Kalin, the Turkish presidential spokesperson, accused France of “jeopardizing” NATO’s security [2] by supporting Haftar. He emphasized that Turkey was supporting the legitimate government of Libya while the French government was backing an illegitimate warlord, thereby jeopardizing the region’s security and Libya’s political stability.

Until now, France’s stance towards the two primary factions within Libya has been one of continuous oscillation. While giving lip service to the UN-backed government, the French government has closely cooperated with Haftar.

Furthermore, France’s admission that it owned the US Javelin anti-tank missiles uncovered when government forces [5] retook Gharyan from Haftar in late June poses significant questions about France’s role in Libya.

The EU officially supports the UN-backed government [6]. Despite the EU’s position, Paris has developed strong ties with Haftar, which weakens the EU’s influence on Libya.

When Haftar began his offensive against the internationally-recognized government, the EU decided to move and condemn the assault soon after it began in April last year, but France blocked [7] the resolution, allowing Haftar to continue to act with impunity.

France has a variety of strategic, geopolitical and ideological interests in Libya. Its interference in Libya is motivated mostly by the preservation of French economic interests and is in line with its ambition to strengthen French influence in North Africa. Security considerations also factor significantly into France’s decision making in the region.

When Qaddafi was in power, Libya produced some 1.6 million barrels of oil per day (BPD), and exported it mostly to Italy, France, Spain and Germany. Libyan oil is cheap to extract and easy to export to Europe. Hence, Paris is seeking to reap significant commercial benefits by securing and promoting the interests of Total, the French oil giant.

France seems to have a highly militarized approach to counter-terrorism [8] in Africa’s Sahel region, which has come at the cost of supporting military regimes instead of supporting the democratic processes in the region.

Several governments with traditionally close ties to France have a poor record of governance at home in terms of human rights, corruption and the concentration of power among a tiny ruling elite. For instance, Gnassingbé Eyadema, the former president of Togo, came to power in a military coup and ruled with an oppressive regime while he enjoyed the support of Paris. Eyadema was described [9] by the former French President Jacques Chirac as being “a close personal friend of mine and of France.”

Although its primary goal in helping Haftar is reaping economic benefits and achieving greater political influence, France keeps repeating the mantra of “counter-terrorism” to justify its position. As such, France’s Libya policy apparently ignores human rights concerns and democratic ideals. In fact, by backing Haftar, who is seeking to return Libya to one-man military rule and dictatorship, France is in direct contradiction with the democratic principles Paris says it stands for. The stabilization of Libya must be the main objective of any foreign engagement. Because countries such as France are particularly concerned with their narrow interests, their self-serving actions have brought greater uncertainty to Libya and impeded a timely resolution to the crisis.

France has been merely seeking to protect its commercial interests and the strengthening of its political influence in North Africa. By providing military support and intelligence services to warlord Haftar, all France seems to be doing is generate greater division and instability in the country, rather than bringing any semblance of “democracy”, which it had promised to the Libyan people in 2011.

Therefore, the French government should rethink its policy in Libya and throw its weight behind consolidating the UN peace process — the only way forward — with NATO, the European Union and Turkey.