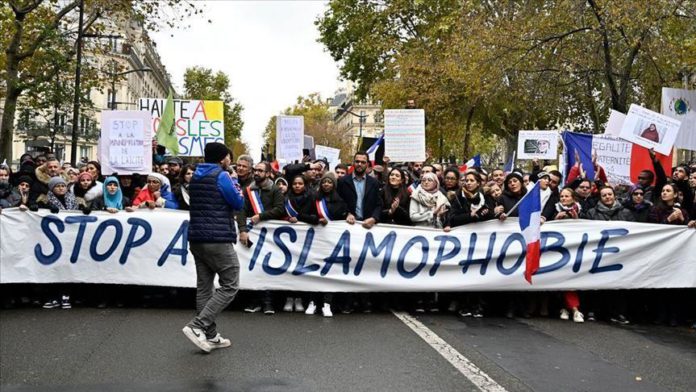 With the projection of cartoons insulting Prophet Muhammad onto the town halls in Montpellier and Toulouse, France has once again symbolically declared that it will not make a compromise with Muslims inside the country and it will treat them as citizens only if they reject their own identity. Concepts such as the rule of law, fundamental rights and freedom, and the presumption of innocence have become negligible when it comes to Muslims.

Each day, it is becoming impossible to intellectually pursue Islamophobia in France and to think about what needs to be done to protect fundamental rights and freedoms. The murder of high school teacher Samuel Paty after he showed in his class cartoons insulting the Muslim Prophet Muhammad, which Charlie Hebdo had announced that it will republish, gave an opportunity to the French politics, which wants to exacerbate every crisis and conflict and turn into a deadlock. The French state, by sharing the way the murder was committed and the message the killer shared after, found a legitimate ground within the social sphere for all decisions it will take to tackle “Islamist separatism”, the most sinister subject of its project of “French Islam”.

The discourses of French President Emmanuel Macron and other top state executives that there are regions within France against the French social structure and that communitarianism divides the republic, were proven at first-hand to the public trough a symbolic case. The French government also announced that new measures suspending the rule of law are on the way.

French Interior Minister Gerald Darmanin in messages on his social media account said there will be police operations on many institutions and people not related to the teacher’s murder, adding that this will be a “message”. Through this message, France officially declared that it will act against the rule of law and has an “enemy” to which it has to give a message. This new war against an invisible enemy is a hysteria making all Muslims — actually visible — in the public sphere to become targets. The concept of Islamophobia, which has been trying to be defined for years and whose legal framework has been tried to be drawn, is not enough to explain this new crisis situation in which the state confronts a belief altogether. Muslims are no longer the subjects of social policies, citizenship services, freedom of belief, but the object of the state’s security and paranoid anti-Islam policies.

The first victim of this new hostile political attitude was The Collective Against Islamophobia in France (CCIF), which publishes an Islamophobia report every year in France and establishes a network of solidarity and legal advice with people who are exposed to discrimination and Islamophobic violence. This organization, which was shown as a separatist movement in state reports, aimed to be the voice of victims by remaining completely within the laws. The closure of the organization, which only seeks the rights and does not even have a political position, in fact, shows where the plans of the French state could lead. In the social sphere, the word Islamophobia is intellectually devalued and those who use the term are blacklisted with accusations of separatism. Even talking about freedom of belief has become a utopia in this discourse in which victimization is equivalent to being a criminal and where Muslims are stigmatized due to their headscarves, beards, names or ethnicity.

In this atmosphere of hatred, the attacks to mosques and Muslims hardly find a place in media — such as the one. on Oct. 18, when two women wearing headscarves came under a knife attack near the Eiffel Tower with insulting terms such as “dirty Arabs”. Also, the day before, two Turkish women were exposed to police brutality in traffic and attacks on mosques occurred in Bordeaux and Beziers.

Far from being able to hear a libertarian voice in the French public that prioritizes the defense of Muslims’ fundamental rights and freedoms, anyone who criticizes the government’s extremist hatred policy even to some extent is marginalized. Nicolas Cadene, the chairman of the official committee that upholds the principle of secularism in France, Observatoire de Laicite (Observatory for Secularism), commented on the latest developments, saying that it came to a point where Muslims are being stigmatized rather than preserving secularism. After his statements, Cadene was subjected to a social lynch and calls were made for his dismissal.

In this new situation, where the evil has become ordinary, Muslims’ place in the French society and attitudes they are exposed to have similarities with the anti-Semitic practices Jews began to experience in Europe in 1930s. In a situation where Islamophobia disguises itself as “freedom of opinion and expression”, Muslims lose their subjectivity and are turned into crime subjects just with their existence. While discussions on socio-economic problems of the French state’s immigration policy are covered up, Muslims are turned into “others” who must constantly prove themselves to the society and state.

* Opinions expressed in this article are the authors’ own and do not necessarily reflect the editorial policy of Anadolu Agency.

* Translated by Burak Dag in Ankara.