TurkishPress
Home News ANALYSIS – First round of Biden vs Trump: An inconclusive debate 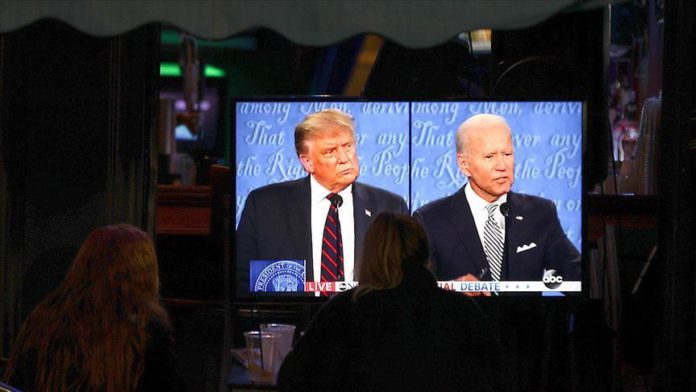 The writer is a researcher at the TRT World Research Centre.

The first 2020 US Presidential debate did not vary to a greater degree in comparison to the debates that took place in the 2016 election season. Rather than an informing contest, the debate was inconclusive and did not draw a comparative picture at the finale between the two candidates. The discourse of the Republican incumbent Donald Trump was bold and with an attitude. Trump kept interrupting his opponent’s statements, persuasively defending that the US economy and social dynamics had been experiencing their greatest moments until the COVID-19-induced fallout hit the country.

His Democratic rival Joe Biden, on the other hand, displayed attributes that his term will blend into a compassionate, well-organized and decisive leadership. He accused Trump’s administration for failing to respond to the COVID-19 pandemic effectively. He argued that the president had ignored the seriousness of the disease in its early stages, adding that he should be held accountable for its spread. The former vice president appealed to American voters, promising that his administration would execute a well through plan to distribute the COVID-19 vaccine once it became available.

Both candidates were fierce in their rhetoric and took their times to corner each other through personal as well as family matters. Hence, they got emotional and often aggressively responded to each other’s accusations. While President Trump sounded louder and more confident as he gazed on his opponent, Biden’s tone was calmer but rebuking as he mostly spoke directly looking at the camera or the moderator.

Overall, the first presidential debate in the 2020 election season was not conclusively informative. It did not present insights into social and economic policies or the kind of leadership that the US electorates should expect from the next president. It has only shown that President Trump’s debating discourse was no different than what he performed against Hillary Clinton in the last election. Yet again, he constructed his position on the lines of being against the corrupt system which, he claimed, manipulated people through dishonest media and electoral rules.

Particularly, when he was asked if he would accept the results and commit to a peaceful transfer of power should he get defeated by Biden, he refused to say that he would. Instead, he stated that if he failed to win the election, the current voting process, i.e. voting by mail –a safe alternative for elderly and many electorates with chronic illness during the pandemic– would be to blame. He made strong accusations about the integrity of the election which did not just feed doubts among the American citizens, but the masses across the globe, who acknowledge the USA as the symbol of free and fair elections.

The intensity of Trump’s offensive towards his opponent’s stand increased each time a new topic was introduced. A total of seven issues were discussed and debated. These were the COVID-19 outbreak; the recent riots related to race discrimination; the economy; the candidates’ records; the nomination for the Supreme Court; the climate; and the integrity of the election.

Notwithstanding, Biden did not outperform his Republican opponent but he was more successful in empathizing with the audience. His pledge to execute a fairer healthcare policy was more convincing and viable. For instance, in a highly compassionate tone, he spoke directly to the camera as he expressed empathy for the families who lost loved ones to the novel COVID-19 virus. Biden surely has a better track record when communicating with the masses through emotional appeals. However, President Trump was resilient throughout the debate and kept talking over him to contain his exposure.

The first round of the US 2020 presidential election debate did not offer a strong insight into the election manifesto of the candidates. It is well clear from the reactions after the debate that Americans were not impressed with either candidate’s performance. Whether that will actually lead people to change their votes remains to be seen.

The results speak for themselves, and in November it will be up to American voters to approve a permanent shift away from the Trump administration’s highly personal and businessman-like governing style.