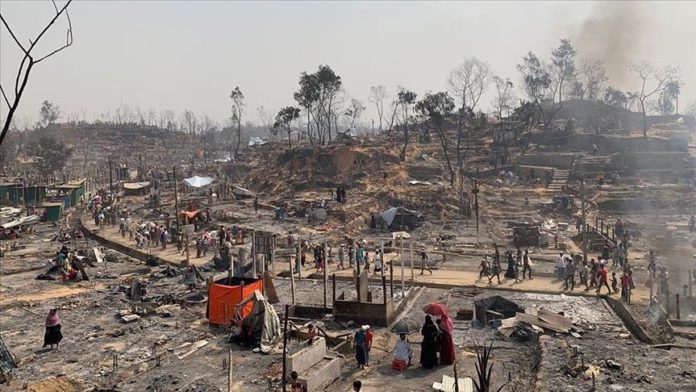 [The writer is a PhD candidate in international relations focusing on migration at Istanbul Medeniyet University.]

Writings about migration often begin with an emphasis on its being as old as human history. This is a cliché, but a very real point as well. Migration remained on the agenda in 2021 as a national and global phenomenon. The move of refugees towards the border to cross from Belarus to Poland in the last months of 2021 caused the immigration and refugees to be evaluated under the security umbrella and the border policies to often become a main agenda item. For Turkiye’s part, refugees became a national agenda topic once again after the house of three Syrians in Izmir on the Aegean coast was set on fire.

One of the issues that needs to be discussed about refugees is the living conditions in the camps in a period of increasing human action. The number of refugee camps is on an upward trend due to the restrictive policies of the states, the preference of refugees to live in camps and the intensity of the official processes needed to follow to obtain refugee status. According to UN Refugee Agency 2020 data, there are 26 million refugees across the world and 22%, or 6 million, of them are living in camps. The Kutupalong camp in Bangladesh is one of the cramped refugee camps, which is considered to be among the largest refugee camps in the world with a capacity of 800,000 people. It is worth noting that this camp is more crowded than Washington D.C.

The increase in the number of refugee camps due to rising human action brings about various problems. For example, fires occur frequently, especially in refugee camps. A massive fire broke out in a camp housing mostly Syrian refugees in the Lebanese city of Miniyeh on Dec. 31, 2021. Moreover, several fires last year broke out in refugee camps in England (Napier barracks) in January, in Spain (Nijar) in February, in Greece (Thessaloniki) and Bangladesh (Cox’s Bazar) in March, in Iraq (Sharya camp) in April, in Greece (Samos) in September, and in Italy (Castelvetrano) in October. In 2020, fires also hit the Greek island of Lesbos in September and Bosnia’s Lipa Camp in December.

Not all of the fires mentioned above were of the same intensity and extent. However, the fires in Bosnia, Greece and Bangladesh are important both in terms of the number of people they affected and the casualties they left behind.

The fire in Bosnia’s Lipa camp destroyed the lives of nearly 1,400 people in December 2020. In September 2020, the shelters of 12,000 refugees became unusable after the fire in the Moria camp on the Greek island of Lesbos, which is known as the largest camp in Europe. It was stated that 20,000 people took shelter in the Moria camp although it was built for 3,000 people. According to Eva Cosse, who conducts research in Greece for Human Rights Watch, these fires were not a surprise, but they were even expected.

The fire that broke out in March 2021 in the Cox’s Bazar refugee camp in Bangladesh, where Rohingya refugees fleeing the Myanmar regime took shelter, left 45,000 people homeless and 11 people dead. It was one of 84 fires in the first quarter of 2021. A total of 82 fires were reported in the Cox’s Bazar camp in 2020. However, more fires occurred in the first four months of 2021 than the previous year’s total.

Recently, the density of refugee camps has increased in line with the rise in refugee movements. So do the fires in the camps. While NGOs in Europe acknowledge arson attacks, they point to the number of fires, saying arson attacks are the minority.

The unfavorable conditions in the refugee camps cause the possibility of arson attack to be considered in the second place. As a matter of fact, it was announced that the fire on the Greek island of Samos was caused by the firewood burned by the refugees in the tents to warm up. After the fire at the Moria camp, another fire broke out due to false use of the electrical system and cables at the Kara Tepe camp.

The cause of the fire in the Moria camp is still unclear, but a possible arson attack is being discussed. Local media in Greece raised the possibility that the fire may have been caused by refugees living in the camp to protest the quarantine measures implemented due to the COVID-19 pandemic. However, Aurelie Ponthieu from Doctors Without Borders said that the reason for the fires are the immigration policies and humanitarian suffering and violence that Greece and Europe have pursued for years. It was announced that four refugees were arrested and sentenced to 10 years in prison for causing the fire as a result of an arson attack in the camp.

After the fire in France’s Grande-Synthe refugee camp in 2017, Francois Guennoc, official of Auberge des Migrants, a voluntary aid organization for immigrants, announced that they would not allow any more large camps to be established. According to Guennoc, large camps increase the likelihood of fire as they require extensive electrical wiring.

For refugees fleeing war and violence, camps appear as a new field of struggle. However, it should be noted that with the increase in the number of migrants, the camps will become more permanent for refugees. For this reason, as mentioned above, it is essential to improve the unfavorable camp conditions. Facilities should be developed so that refugees do not need to start a fire for warming or cooking. The situation of refugees who cannot meet their basic needs should be recognized by the international community.

The International Refugee Regime, which was established with the 1951 Geneva Convention and the 1967 New York Declaration to regulate the migration movements in Europe after the World War II, should be put into effect after the fires, mostly in refugee camps in Europe. The camp fires in developing countries such as Bangladesh, where the infrastructure opportunities they offer to their own citizens are insufficient, are not considered surprising for the international community. However, the inability of European countries to allocate infrastructure resources for such basic needs is an issue that needs to be discussed.

In addition to all these, it is also important for international organizations and humanitarian aid groups to cooperate in this regard and that the infrastructure work and measures are carried out for fire safety in the camps to eliminate possible damages during and after the fire.