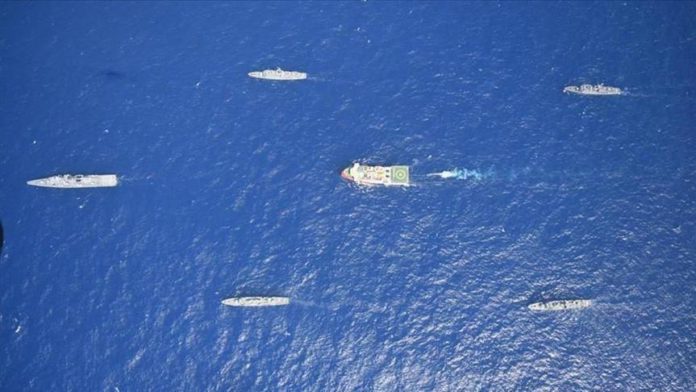 The South China Sea and the Mediterranean maybe thousands of miles apart, but their waters are literally on fire, as world powers are jostling, playing a new “Great Game”, keeping in view their strategic interests and large discoveries of oil and gas reserves in these regions.

For many years, countries inimical to Turkey’s interests have been using the Mediterranean Sea to complete an encirclement around the country. While attempting to break this string of pearls being woven around, Turkey’s deft move to conclude a maritime boundary accord with Libya last year in November unnerved many global and regional players, namely Greece, France, Israel, Egypt, and the US.

Many of them have voiced opposition to the sovereign right of both governments to strike an agreement, as it has broken the encirclement strategy of Greece in the Eastern Mediterranean.

The exclusive economic zone (EEZ) now agreed upon by Ankara and Tripoli would also cut off the East Mediterranean or EastMed pipeline route that Cyprus, Greece, and Israel were planning to build to connect to Europe.

According to the 1982 UN Convention on the Law of the Sea (UNCLOS), a sovereign state has special rights regarding the exploration and use of marine resources, including energy production from water and wind up to 200 nautical miles from its coast. The overlapping claims, haphazard coasts, and various islands make it impossible to apply this principle to the Mediterranean.

But the provisions of the same convention also call for designating principal island from which the distance can be measured, and not from smaller islands as Greece believes.

Experts believe that this approach was based on the stance that a small island may lack resources sufficient for the safeguarding and development of the ocean and that they should therefore have jurisdiction over only small areas.

Claiming the larger EEZ for its islands, Greece, in violation of this principle, is trying to extend well into parts of the maritime area agreed upon by Turkey and Libya. Further, since many islands like Meis Island, or Kastellorizo, lie just off Turkey’s coast, the Greek argument will shrink Turkey’s coastline and keep it restricted to its southern shores.

According to a researcher Idlir Lika, who has written a paper for a Turkish think-tank Political Economy and Social Research Foundation (SETA), Greece had earlier stonewalled a proposal to build a pipeline between Israel and Turkey in mid-2016.

“When this proposal was in final stages of negotiations, Athens pushed the Greek Cypriots in torpedoing the UN-sponsored talks to reunify Cyprus, and thus dashed the hopes of the gas pipeline,“ he said.

After the serious rift in Israeli-Turkish relations following the May 2010 Mavi Marmara incident, Greece started developing a full-fledged strategy of cooperation with Israel by pursuing closer political, economic, and energy ties.

In January 2019 in Cairo, Greece arranged a meeting to promote energy cooperation, but excluded Turkey. Perceived as a milestone in Greek diplomatic endeavors to encircle Turkey, seven governments, the Greek Cypriot administration, Greece, Israel, Italy, Jordan, Palestinian Authority, and Egypt decided to form the Eastern Mediterranean Gas Forum (EMGF) to promote energy cooperation. A few months later France officially requested to become EMGF’s ninth member, while the US was pushing to join as an official observer.

According to the authors of a book entitled Eastern Mediterranean and Turkey: Political, Judicial, and Economic Perspective, despite having one of the longest coastlines in the Eastern Mediterranean, there is an obvious attempt to imprison Turkey within a narrow area in terms of the continental shelf and exclusive economic zone.

“Ignoring the special statuses of the Eastern Mediterranean and the Aegean Sea caused by half-closed sea and islands, and without considering the decisions of international judicial bodies about the maritime jurisdiction areas of islands, maps — showing most of the Turkish continental shelf as belonging to Greece and the Greek administration — are prepared,” researchers Kemal Inat and Burhanettin Duran wrote in a book published by SETA.

Once Greece succeeded to stall the Israel-Turkey gas pipeline project, it subsequently developed strategic ties with Israel. Amikam Nachmani, an Israeli scholar specialized in Eastern Mediterranean studies, said the cooperation has worked for the Israeli Air Force as Greece operates a Russian-made S-300 defense system, which was meant for Greek Cypriots. Since Syria and other Middle Eastern countries are also equipped with a similar Russian system, training against these missiles has helped Israeli forces combat and bombard Iranian positions in Syria by neutralizing the S-300 system.

On Jan. 2, Greece signed an agreement with Southern Cyprus and Israel to construct a 1,900-kilometer (1,180-mile) gas pipeline at a cost of $7 billion that would carry gas from the coasts of Cyprus island and Israel to Europe via Greece to complete the encirclement of Turkey.

In a counter to this strategy, Ankara negotiated a maritime border delineation and a defense cooperation agreement with the UN-recognized Government of National Accord (GNA) in Libya. While analysts believed that the EastMed pipeline was already a costly affair, the coming together of Turkey and Libya made it further unfeasible.

Greece, however, successfully lobbied at the US Congress and succeeded to lift the three-decade-old arms embargo from the Greek Cypriot administration of Southern Cyprus. It also tried to use its leverage within the EU to push back against Turkey and block any political solution to the Libyan crisis unless the Turkey-GNA deal is nullified.

In December 2019, the European Council declared the Turkey-GNA deal as infringing upon the sovereign rights of third states, and unequivocally affirmed its solidarity with Greek and Greek Cypriot concerns. The US Congress passed the Eastern Mediterranean Security and Energy Partnership Act which, among other provisions, lifted the three-decade-old arms embargo from Southern Cyprus and extended further foreign military assistance to Greece.

Those who strongly lobbied at the US Congress included the American Jewish Committee and the Hellenic American Leadership Council. Instead of trying to mediate and bring reconciliation between the two NATO members Turkey and Greece, the US fueled the militarization of the geopolitical energy competition in the region.

On the feasibility of the EastMed pipeline, even the former Cypriot Foreign and Commerce Minister Nicos Rolandis said the investors will hardly take a risk to invest in the pipeline that is threatened and mired in controversy.

“What company or group of companies would sink €5-6 billion into a project going through part of a sea on which Turkey and Libya have made claims through the recent signing of a memorandum of understanding,“ he told Chinese official news agency Xinhua in January.

According to an investigative report by the independent website Mada Masr, “it is unlikely that Israeli gas can be exported to Europe because of its high cost.” It is estimated that the imported Israeli gas will be sold for around $7.5-8 per one million British Thermal Units per hour (MBTU), while the current market price of gas bought by Europe stands at around $5.8/MBTU.

Rolandis, who served as the minister of commerce, industry, and tourism in 1998-2003, also questioned the cost of transporting a relatively small quantity of natural gas through the longest pipeline in the world.

“Compared with other pipelines which transport five or six times as much gas in Europe, the accumulated cost of the EastMed project will be higher,” he said.

Turkish Republic of Northern Cyprus (TRNC) President Mustafa Akinci said the pipeline will not bring peace to the region. He said excluding his region and Turkey will only add instability in the region. “Managing stability in the region requires a mutual-beneficial approach, which necessitates a route that would transfer gas to Europe via Turkey, which is the shortest, cheapest, and fastest,“ he said.

Expedient option to include Turkey

Turkey and the TRNC have made three major moves to protect their sovereign rights, including military intervention, putting an end to foreign operations, and preventing incursions into the areas licensed by Northern Cyprus to Turkish oil companies, according to Emre Iseri and Ahmet Cagri Bartan, researchers from Turkey’s Yasar University in the coastal Izmir province.

A very recent example of this was when Turkey prevented ENI, an Italian drilling platform, from moving towards the Cuttlefish target. Further, they have launched diplomatic efforts to assert their rights over hydrocarbon resources in the Eastern Mediterranean.

Suzanne Carlson, a senior editor at The Oil & Gas Year — an annually published book on the international energy industry — argues that, right now, the most expedient economic option in the Eastern Mediterranean is the construction of a new pipeline carrying the Cypriot and Israeli gas through Turkey. She believed that as long as Turkey has been left out from prospects for regional stabilization, efficient energy resource development might go down the drain.

The Eastern Mediterranean is believed to have approximately 4.5% of the total natural gas reserves in the world. Apart from the explorations in the Levant and West Nile basins, no comprehensive research has yet been done in the region, which includes Turkey’s continental shelf, stretching from the southwest coasts of Turkey to the eastern coast of Libya and the western coast of Egypt. Having the Wafa and Bouri gas fields, Libya is 22nd in the world with around 1.5 trillion cubic meters of natural gas reserves.