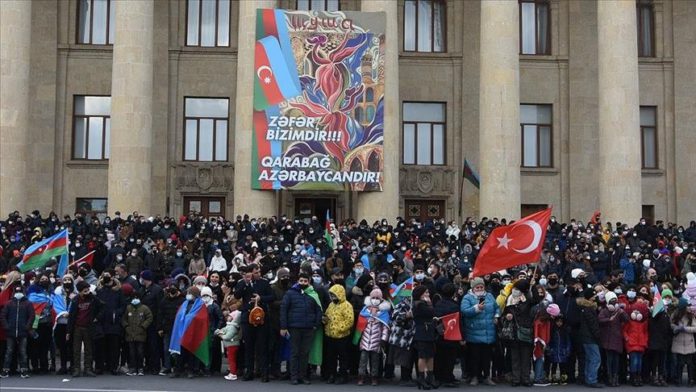 On Dec. 10, 2020, Baku witnessed its first ever military parade since the country regained independence in 1991. Azerbaijan celebrated its military victory over Armenia in the 44-day Second Karabakh War – the “Patriotic War” – which lasted from Sept. 27 to Nov. 10. The parade was attended by the President of the Republic of Turkey, His Excellency Recep Tayyip Erdogan and his staff, while Turkish soldiers (mehmetciks) marched alongside Azerbaijani military personnel in Azadliq Square in a marvelous display of solidarity with their brothers.

Apart from being a magnificently proud moment in the history of independent Azerbaijan, this Victory Parade also symbolized the beginning of a new era in the South Caucasus region. The visit of President Erdogan to stand by Azerbaijan on this uniquely historic day also conveyed a number of significant messages in this regard.

Above all, this has been another manifestation of the existing strong cultural and historical kinship ties and strategic partnership between the two nations. The slogan “One nation-two states” –the driving force behind Turkey-Azerbaijan relations—gained a whole new significance during the Second Karabakh War. Turkey, from the very outset, extended its strongest and unequivocal political support to Azerbaijan’s counteroffensive to reclaim its internationally recognized territories, which, in addition to demonstrating an affinity for the rules-based international order, also gave Azerbaijan’s operations further confidence in pursuing its just cause. “Azerbaijan’s joy is Turkey’s joy; Azerbaijan’s pain is Turkey’s pain,” the president of Turkey said during his speech at the parade, invoking the famous adage of Mustafa Kamal Ataturk.

The visit was also notable, with the signing by Azerbaijan and Turkey of several documents involving a deepening of cooperation between the two on several platforms. The two countries agreed on mutual visa-free travel, using only national identifications cards. They also signed documents on the growth of small and medium-sized enterprises, investments, transport, as well as strategic collaboration in the media sector. The signing of new documents further built on the already intense bilateral cooperation between Turkey and Azerbaijan in many areas, with many similar agreements having previously been signed in Feb. 2020 during President Erdogan’s visit to Baku to participate in the 8th meeting of the Azerbaijan-Turkey High-Level Strategic Cooperation Council.

At the joint press-conference after the parade and the signing of the documents, President Ilham Aliyev announced that both countries also discussed the post-conflict future of the region and agreed that a multilateral cooperation platform involving every nation in the region could be launched. In this connection, he specifically stressed that the existing Turkey-Azerbaijan-Georgia, Azerbaijan-Russia-Iran, Turkey-Russia-Iran, and other similar regional cooperation formats could be galvanized under one common umbrella with the participation of all six countries of the region — Turkey, Azerbaijan, Russia, Iran, Georgia, and also Armenia. In order to do so, Armenia must however opt to end its territorial claims to its neighbors, learn its lessons, and engage in building constructive relationships in the region. President Ilham Aliyev explicitly stated that Azerbaijan had not started this animosity with Armenia and was ready to close this chapter of hostility, acrimony and war, and to finally initiate a constructive engagement with its neighbor. The proposed new format of all-inclusive cooperation in the South Caucasus region and its immediate neighborhood may also eliminate the risk of future conflicts.

Turkish President Recep Tayyip Erdogan extended his support to the plan for a six-party cooperation mechanism that would contribute to achieving sustainable peace in the region. He also emphasized that Turkey has never had any issues with the Armenian nation and that more than one hundred thousand Armenians actually live in Turkey. Problems are created by the representatives of Armenia that pursue expansionist policies. He noted that if Armenia finally comes to embrace a more positive approach towards Turkey, Turkey may open its borders with Armenia, as Turkey does not wish to leave its borders with the neighboring country indefinitely closed. President Erdogan also said that Armenia should free itself from its venomous ideology and the strong influence of external circles on it. The Armenian nation should draw its conclusions from the recent events and this will definitely help to improve the situation in the region.

The Patriotic War waged by Azerbaijan against Armenia’s policy of occupation has exposed Armenia’s faulty strategic thinking. Armenia has self-inflicted isolation from all regional infrastructure, transport, communication, etc. initiatives by nurturing expansionist, militaristic and nationalistic policies that have for years served to create prosperity and mutually beneficial cooperation in the South Caucasus region. These initiatives have bypassed Armenia, however.

Azerbaijan and Turkey have kept their borders with Armenia closed for decades in rejection of Armenia’s occupation of nearly twenty percent of Azerbaijani territories. While Armenia lays territorial claims to also Turkey and has long been at loggerheads with it over the so-called “Armenian genocide” issue, the only condition Azerbaijan and Turkey ever had for including Armenia in those initiatives was the de-occupation of Azerbaijani territories. Armenia refused to do so for years.

Nevertheless, the 44-day Patriotic War, which culminated in Azerbaijan’s victory and the return of its occupied territories, has introduced the new contours of regional geopolitics. Azerbaijan has declared that it will not bear a grudge against Armenia for thirty years of occupation and is ready to move on and look beyond. Turkey also supports this approach. The ball is now in the Armenian court. Its future actions may make or break this unique opportunity to attempt to build an all-inclusive and comprehensive cooperation platform in the South Caucasus. This region has never had one before.

[ The writer is Board Member of the Center for International Relations Analysis, located in Baku ]