TurkishPress
Home News ANALYSIS – Europe's condemnation of racism in US warrants a look in... 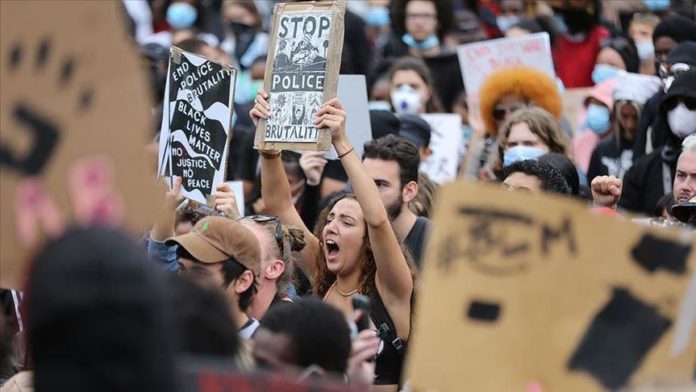 The killing of African American George Floyd by a white police officer in the United States has precipitated a wave of anti-racism demonstrations across the US and worldwide. Europe was no exception, as thousands of people took to the streets in Berlin, Paris and London, decrying police violence and racial injustice.

The killing has caused global outrage. Many European governments, as well as a number of top EU officials, denounced the institutional racism and abuse of power. They also expressed their support for the anti-racism protests that are taking place around the world.

With the exception of Spain’s far-right Vox party and the Netherlands’ anti-Islam Freedom Party, which labelled anti-racist protestors as “terrorists”, the typical response by the majority of the European parties was one against all forms of racism.

While it is heartening to see mainstream European parties condemning the murder and showing solidarity with the George Floyd protests, most European countries are not too different from the US when it comes to the issues that have led to the death of George Floyd. Discrimination and systemic racism are not unique to the US, and the occurrence of racially motivated crimes has long been on the rise in many EU-member states.

According to the annual report of the European Commission against Racism and Intolerance (ECRI) published in Feb. 2020, there is a recurring problem of discrimination against Muslims, Jews, Roma people and persons of color within the Council’s 47 member states. The ECRI emphasizes the growing influence of ultra-nationalist and xenophobic politics in Europe, resulting in a sharp increase in a discourse rooted in bigotry and intolerance.

The racism created by the far-right extremism against the religious and ethnic minorities, particularly Muslims in Europe, is on the rise in mainstream European spectrum.

In the most recent act of terrorism, which took place in February, 11 people, most of them of Turkish origin, were killed in Hanau by a far-right extremist near the city of Frankfurt, Germany. The massacre in Hanau is only the latest in a long series of terrorist attacks perpetrated by far-right extremists in Europe.

Far-right parties envisage a civilizational understanding of Europe as a continent of white Christians with shared histories and cultural values, in which Muslims are the “dangerous others” that constitute a cultural threat to the pan-European national identity, often manifested as white nationalism.

Islamophobia has become a useful instrument for far-right parties to use for electoral purposes. Such politicking has created a political milieu that has allowed the far right not only to thrive on Islamophobia but also to shift it into the political and social mainstream in many western societies. Far-right populists have been setting the political agenda, forcing opportunistic “mainstream” conservatives to mimic the ideas and language of the radical fringe [4].

Nonetheless, even with such threats posed by far-right ideology to societal cohesion and European values that protect ethnic and religious minorities, politicians and the mainstream media have been turning a blind eye, choosing to dismiss this problem as “a fringe issue” that exists within the confines of the far-right territory.

Islamophobia, on the contrary, is surely no longer confined to the fringes. It has rather become a continuous kind of hostility manifesting itself within the power structures as well as in other social spaces.

In the UK, for example, a person 150 times more likely to be stopped and searched under Schedule 7 of the Terrorism Act — a draconian piece of legislation that allows people to be stopped at ports without “reasonable suspicion” — if you are of Pakistani heritage than if you are white.

Time for Europe to face its own racism

White supremacy in the US and discrimination against African American people have been flourishing in plain sight in the US. The tragic death of George Floyd is yet another illustration of racism and contempt against black Americans in the US. Nonetheless, white supremacy and feeling of superiority still prevail in all societies. The struggle against racism and its kinds is far from being over.

Just like white supremacy and racism against African American people is a threat in the US, far-right extremism exists and is a threat to Europe.

The tragic George Floyd incident should be a wake-up call for all European governments to address the challenges of its own. European governments should realize and recognize that various racial groups, whether people of different colors or religious minorities, are facing discrimination on a daily basis. Therefore, they should not turn a blind eye to the issue of racism and bigotry taking place in their continent.

While it is true that debates on race and far-right extremism are taking place, they are far from resolving the issue. There is still a lot to do to combat the threat of far-right extremism. As long as racist politicians and political parties are able to continue their racist propaganda with impunity in the name of freedom of speech and their politics of hate receives substantial support, the trivialization of racism is inevitable.

It is high time for Europe to admit and face its own problem of racism and far-right extremism before it is too late. Today, the whole world is united in seeking justice for George Floyd. However, justice can only be achieved if the scourge of racism is eradicated across the globe, beginning from where it all started.

[ The writer is a deputy researcher at the TRT World Research Centre. He is currently a PhD student at Istanbul University in Political Science and International Relations. His primary area of research is European and UK politics ]