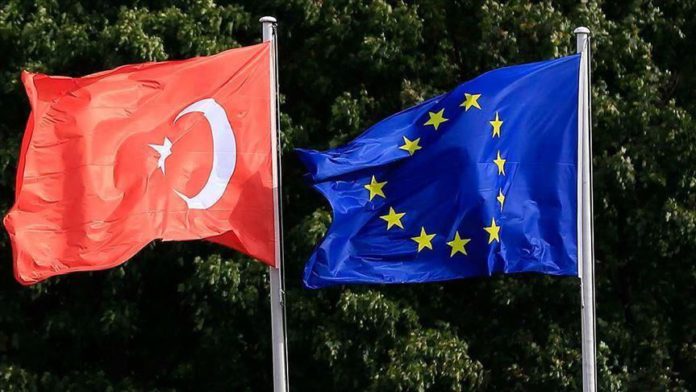 The writer is a Master of Laws (LL.M.) in International and Comparative Law candidate at Trinity College Dublin. He is a 2019-2020 European Union (EU) Jean Monnet scholar. He holds a Bachelor of Arts (B.A.) degree in law and minor degree in political science from Bilkent University. His main focus areas are Turkey-EU relations, Eastern Mediterranean and contemporary debates in Turkish foreign policy. He has a special interest in public international law, EU law and late-Ottoman era legal-political developments.

On Oct. 1-2, 2020, the European Council (EUCO) adopted conclusions on several issues, including the European Union (EU)’s external relations with Turkey. Apart from Turkey’s accession process, Turkey has long been a strategic partner for the EU. The EUCO conclusions, however, are reminiscent of the EUCO President Charles Michel’s recent statements that suggested European leaders implement a “carrot and stick” approach [1] towards Turkey. Meanwhile, bearing in mind that the Turkish President Recep Tayyip Erdogan confirmed Turkey’s readiness for talks so long as there is goodwill, the ties between Ankara and Brussels can only be reinforced if Turkey’s pursuit for diplomacy and equitable solutions is taken into account. [2] The EU should not overlook Turkey’s well-timed moves to leave the door open for multilateralism. By the way, the EU must be aware of Turkey’s increasing bargaining power in the region and Turkey’s unwavering commitment to remain a pivotal state for the sake of the stability of Europe and Middle East.

The conclusions adopted at the Special European Council Meeting on Oct. 1-2 are a manifestation of the EU’s incompetence while coping with current regional crises. First and foremost, the EU’s credibility and European interests are being taken hostage by the Greek – Greek Cypriot duo. Whilst reiterating its call for “a stable and secure environment” in the region, the EU, once again, demonstrated its reluctance to pronounce Turkish Cypriots as the counterpart of the Greek Cypriots and insisted on its opportunist stance whereby it ignores the fair revenue sharing in the Eastern Mediterranean. [3] Although the Union welcomed the resumption of the exploratory talks between Turkey and Greece, it continued to impose political pre-conditions pertaining to the modernization of customs union and trade facilitation for its candidate country and strategic partner Turkey. It comes as no surprise that the EU staunchly embraced the ill-fated stance of ignoring the principle of sovereign equality, dictated by the Greek – Greek Cypriot duo, but the EU’s acknowledgement of the necessity to re-energize the EU–Turkey agenda by means of updating the customs union is a positive development. Meanwhile, the Turkish Ministry of Foreign Affairs welcomed the reference to the convening of an Eastern Mediterranean Conference, formerly proposed by President Erdogan. [4] Overall, this relatively constructive approach towards Turkey’s demands may herald the EU’s awareness of changing dynamics in the EU-Turkey relations.

At this point, it is worthwhile to remember some recent remarks by Sinan Ulgen (the chairman of the Istanbul-based think-tank EDAM and a former Turkish diplomat). Ulgen, by upholding Turkey’s strategy in the Eastern Mediterranean, puts forward the argument that President Erdogan’s European counterparts have no real leverage over him, yet Turkey can pressure the Union over several issues, including the refugee crisis. Hereby, Ulgen argues that incorporating multilateral diplomacy into Turkey’s hard-power strategy is essential and the EU should be wary of this newly-established equilibrium as well. For the EU, elaborating on a new Turkey policy is of utmost importance and the European policy makers had better fortify ties with Turkey by actualizing additional trust-building measures, such as the acceleration of the modernization of the EU-Turkey Customs Union, according to Sinan Ulgen. [5]

Ulgen notes that Turkey’s move to invoke diplomacy would definitely push the EU policy makers to make a progressive move. Paying attention to Turkey’s willingness to update the EU-Turkey Customs Union might be a diplomatic remedy against the breach of good practice and bona fides between the parties provoked by the EU’s ambivalence. Furthermore, the EU, by re-evaluating its commitments to the EU – Turkey Association Law, would get an opportunity to overhaul the negative effects of sacrificing its political, legal and economic ties with Turkey for the sake of the narrow-sighted interests of the Greek-Greek Cypriot duo.

EU–Turkey Customs Union: Why does Turkey prioritize the update of the customs union?

Turkey has long been echoing the vitality of the modernization of the EU–Turkey Customs Union. Thanks to Turkish diplomacy’s astute strategies and the Turkish Army’s military gains on the ground, the EU finally proposed the update of the customs union as part of its agenda.

The final stage of the EU-Turkey Association Law, the EU–Turkey Customs Union (Decision No 1/95), was established on March 6, 1995, in order to facilitate the economic integration between the parties. The obligations stemming from Decision No 1/95 are various, such as the prohibition of customs duties on imports and exports and all charges having equivalent effect. Although the customs union’s dynamic effects are undeniably beneficial for the Turkish manufacturing industry, Ankara contemplates the update of the customs union as a backbone of its policy to fully integrate the Turkish economy to the European and international competition rules. For Turkey, the main difficulties are risks of trade diversion and unfair competition due to the reluctance of some of the EU’s partner countries to conclude similar agreements with Turkey, technical barriers (including visa restrictions for Turkish businessmen and truck drivers) and the lack of adequate participation in the decision-making mechanisms of the EU. [6]

The problems stemming from the asymmetric structure of the Customs Union is definitely surmountable. Hereby, the EU would assume an indispensable role and it can prove its regional effectiveness, if it takes the economic developments and changes in Turkey and the global trade into account. Turning a blind eye to Turkey’s calls would undermine the EU’s credibility.

Turkish Foreign Minister Mevlut Cavusoglu, in his recent article for Politico, puts forward an inclusive framework to adapt to the changing geostrategic outlook while respecting Turkey and the EU as indispensable partners. [7] From this approach, it could be anticipated that Ankara will seek for the EU’s partnership in the settlement of regional and global disputes in the short run under a win-win strategy. Recalling Ulgen’s aforementioned thoughts, it might be the right time for the EU to reconsider Turkey’s unprecedented role in facilitating trade in Europe. Moreover, as Deputy Minister of Foreign Affairs and Director for EU Affairs Ambassador Faruk Kaymakci said in July that the update of the Customs Union might offer a relief for Europe in the post-COVID-19 era. [8] Thus, updating the obsolete framework of the Customs Union as a trust-building measure would constitute a pillar of this win-win strategy.

Taking notice of Turkey’s increasing bargaining power and leverage over the Union due to the re-emergence of a multipolar world and recent developments, the EU must ascribe more importance to acting in accordance with EU law. The EU’s own jurisprudence necessitates the full implementation of the free movement rights stemming from the founding treaties of the EU as well as international agreements, including the Ankara Agreement (1963). Fostering multilateralism would not mean being insistent on a carrot and stick approach to Turkey for the EU, yet it would mean revisiting the legal and political pitfalls that had turned out to be a deadlock between the parties. The modernization of the Customs Union, apart from its prominence in trade facilitation, would also enrich the rights and vested interests of Turkish citizens, which have been jeopardized due to several EU member states’ unilateral actions.

All in all, the encroachment upon the rights of Turkish citizens in the EU must come to an end. As Ulgen pointed out recently, the tension in the Eastern Mediterranean pushed the EU into a real test of ambitions and capabilities as an effective foreign policy actor. [9] Unless the current stubborn attitude in jeopardizing the rights of Turkish nationals and ignoring Turkey’s calls for an equitable solution in the Eastern Mediterranean as well as in international trade is cast aside, the EU would lose its credibility as the main soft power of the region.

It should not be forgotten that the international community, unfortunately, witnessed the EU’s condoning the oppression inflicted by the EU member state Greece on Syrian refugees in early 2020. Therefore, the EU lost its capability to act as an effective foreign policy actor in the refugee issue. This time, the EU should not miss the opportunity to fortify its ties with its candidate country Turkey and should rely on trust-building measures such as modernizing the Customs Union. It should not be forgotten that the Turkish resolution to foster diplomacy was handed to the EU on a silver platter, thanks to Turkish diplomacy’s vigilance. The emphasis of the European Council conclusions on the update of the Customs Union, if the EU also opts to bolster multilateralism, can serve as an opportunity to help defuse the tensions and prove the EU’s raison d’être. In short, the EU’s credibility as an effective foreign policy actor depends on paying attention to Turkey’s national interests and calls for peaceful negotiations.