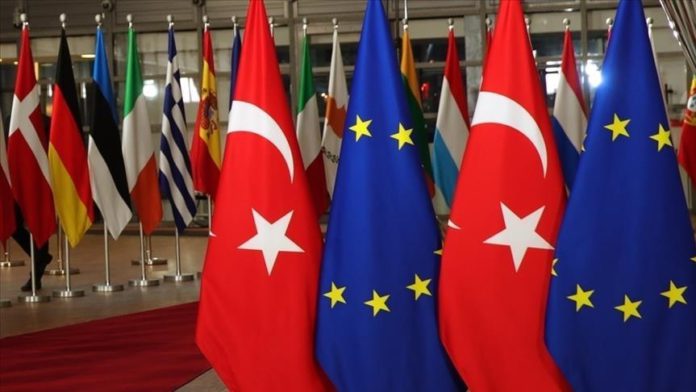 Yunus Mazi studied Political Science and Philosophy at the University of Bielefeld in Germany and earned his master’s degree from the Turkish-German University’s European and International Affairs Program.

The European Union leaders’ summit was convened virtually on March 25-26, 2021, where digitalization goals, research efforts for coronavirus vaccines, and EU-Turkey/Russia relations were discussed. In particular, the evaluations made regarding the EU-Turkey relations were of utmost importance for the development of bilateral relations, as well as identifying cooperation and conflict. Various issues regarding Turkey’s internal affairs were addressed at the summit, in addition to the discussion of topics such as Libya, the Eastern Mediterranean, the fight against terrorism, refugees, and the EU Customs Union.

The pre-summit meeting of Turkish President Recep Tayyip Erdogan with European Commission head Ursula von der Leyen, as well as Turkish Foreign Minister Mevlut Cavusoglu’s meeting with Josep Borrell, high representative of the European Union for foreign affairs and security policy, were positive signs indicating that areas of cooperation would be highlighted in bilateral relations, as well as areas of conflict. Besides, the underlining of Turkey’s strategic ally status in the NATO foreign ministers’ meeting was another sign that there would be no sanctions imposed on Turkey. More statements made by various EU member state leaders on the EU-Turkey relations before the summit contained positive messages too. For instance, German Chancellor Angela Merkel had described the initiatives that Turkey took in the Eastern Mediterranean and at the exploratory talks that started between Turkey and Greece as “admirable” in earlier statements. Similarly, Italian Prime Minister Mario Draghi had expressed before that summit that Turkey must be collaborated with for tackling issues such as immigration and anti-terrorism. Although occasionally, Turkey’s some decisions regarding internal politics were criticized unjustly and disproportionately, it was also mentioned that the necessity for focusing, especially, on the areas of cooperation in bilateral relations between Turkey and the EU could not be overlooked. Likewise, Spanish Foreign Minister Arancha Gonzalez Laya had also pointed out the necessity of creating a positive agenda in their relations with Turkey. All of these meetings ahead of the summit and some of these EU member states’ positive discourse on their relations with Turkey created some expectations that the EU-Turkey relations would be approached rationally and fairly throughout the summit, and that concrete policies would be followed.

When the statement released following the summit on March 25-26 is analyzed, it is found that the most prominent issues concerning the EU-Turkey relations were the Eastern Mediterranean, immigration, and the EU Customs Union update. The declaration also includes the EU’s statements over its being ready for discussions with Turkey on issues such as public health, climate, anti-terrorism, and regional matters. The report also mentioned that the issue of visa-free travel should be appealed to the European Commission to increase cooperation with Turkey, and that inconclusive matters from the summit would be re-discussed and sorted out in a summit in June 2021.

In the statements made, it was expressed that the EU welcomed the exploratory talks held between Turkey and Greece, as well as the recent efforts to reduce tensions in the Eastern Mediterranean. Also, EU foreign policy chief Borrell stated that efforts would be made to organize a multilateral conference on the Eastern Mediterranean issue, the developments would be closely monitored, and that a coordinated approach would be adopted with the parties. It was very likely that Greece and the Greek Cypriot administration would push for imposing sanctions on Turkey at the summit. However, it was found that the EU was not eager to impose sanctions. Thus, the policies adopted by Turkey in recent years in the Eastern Mediterranean helped relieve tension and prevent conflicts not only in the EU-Turkey relations but also within the EU itself.

On the other hand, the EU used positive rhetoric about taking joint action with Turkey on the refugee issue. It was pointed out in the declaration that Turkey’s being home to Syrian refugees, as well as the precautions taken by Turkey during the transfer of these refugees to Europe, was very significant for the EU. It was also emphasized at the summit that the sides’ cooperation in immigration management should be strengthened. In this context, improving cooperation in dealing with issues such as combating illegal migration and ensuring the remigration of irregular immigrants, as well as those whose asylum applications are rejected, back to Turkey was highlighted. Despite having been reiterated for a long time on the issue of refugees, these discourses, which are yet to grow into concrete policies and remain just rhetorical statements, also indicate that they are delaying tactics. When the EU statements on the refugee issue are analyzed, Turkey turns out to be an irreplaceable partner for the bloc. Moreover, the EU member states are hesitant to face the issues that might emerge from a potential refugee influx from Turkey, in addition to the troubles caused by the COVID-19 pandemic already.

The updating of the EU Customs Union, which has been left to drag out by the EU for years, was another issue addressed at the summit. It was brought forward at the meeting that the EU was open to taking some important steps in this regard. Highlighting the necessity of developing Turkey’s economic relations with the EU, it was expressed that the European Council must start working on the revising of the Customs Union, which has not been able to go beyond rhetoric for years, for these relationships to deepen.

It is seen that the EU aimed to employ a “carrot-and-stick” strategy in its relations with Turkey once again at the leaders’ summit. While the updating of the Customs Union and discourse on visa-free travel function as the “carrot,” the “stick” is revealed with the criticism targeting the Eastern Mediterranean issue and Turkey’s internal policies, as well as with the statements that “gradual, proportional and reversible relations” would be developed with Turkey.

Since the updating of the EU Customs Union and visa-free travel are among the requirements of the 2016 EU-Turkey migrant deal already, these matters coming up at the summit, although received positively, are not sufficient. On the other hand, inconclusive matters on EU-Turkey relations which were postponed to be discussed at the June 2021 meeting demonstrates that just as there is not much consensus on most issues, there is no consensus on [relations with] Turkey either among EU member states and that the EU is hoping to stall for time by putting off establishing concrete policies over the EU-Turkey relations and could at any moment revert to playing the “bad cop”. EU member states have not only been facing a political crisis influenced by the far-right but also failed to establish a common foreign policy in the recent period in several areas. Their relations with Turkey are also clearly one of the issues that they have experienced a crisis in establishing a common foreign policy.

Taking into account the general elections to be held in France and Germany as well, we can say that both of these countries are wrestling with the far-right internally and that far-right ideologies would see more adoption in society, as well as in politics, with a potential influx of refugees to European countries. Thus, to preserve the integrity of the EU and to maintain political stability, the EU member states, and especially France and Germany, are compelled to strengthen their areas of cooperation in their relations with Turkey and to take concrete steps that go beyond rhetoric in their areas of conflict. For their bilateral relations to develop rationally and on equal terms, the EU must keep its promises and take tangible action. For Turkey to become a full EU member, on the other hand, the member-states must re-establish their relations with Turkey based on rationality and equality by distancing themselves from a value-based foreign policy approach and drop their alienating discourse and “threatening” portrayal of Turkey in a bid to solicit votes from far-right voters (as French President Emmanuel Macron did so with his last statement). Otherwise, relations of strategic importance; socially, politically, and economically — both for Turkey and the EU — are doomed to meet a bottleneck.

Translated from Turkish by Can Atalay