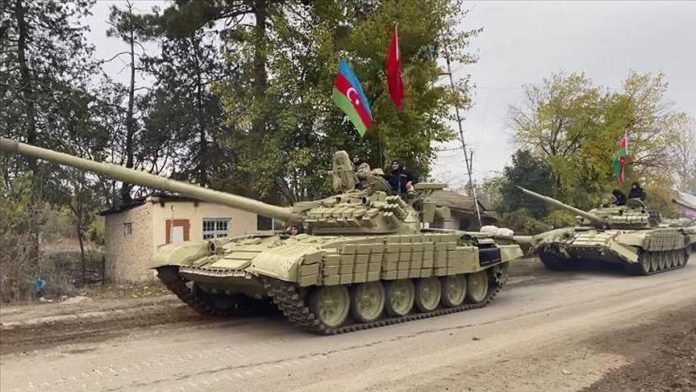 *The author is an alumnus of Trinity College Dublin, specialized in Master of Laws (LL.M.) in International and Comparative Law. His main focus areas are Turkey-EU relations, Eastern Mediterranean and contemporary debates in Turkish foreign policy. He has a special interest in public international law, EU law and Late-Ottoman Era legal-political developments.

Although 2020 will definitely be remembered as a tough and unprecedented year, Azerbaijan’s legendary victory over Armenia in Upper-Karabakh was not overshadowed by the ongoing COVID-19 pandemic. Overall, the Upper-Karabakh Ceasefire Agreement is not just an ordinary border agreement, yet it will also be marked as a manifestation of the reality that even the most complicated “frozen conflicts” can be resolved through diplomacy and/or use of military force.

Nevertheless, there are a number of actors that have underestimated the peaceful settlement of the Upper-Karabakh Conflict and are aiming to downplay Azerbaijan’s technological superiority by ignoring Turkey’s inclusion as a “game-changer” in the conflict. Unfortunately, the European Union (EU) is one of them. For instance, the EU top diplomat Josep Borrell’s recent statements on the possibility of the troop deployment of the EU in the region demonstrate how the Union is devoid of rational policymaking. Having perplexed by the decades-old delusions that emanated from Armenian claims, Borrell said that the EU will not deploy troops on the ground and will not do what Turkey did. Actually Borrell’s attitude could not hide the EU’s estrangement from its long-term objectives aiming to consolidate the EU’s position as a farsighted and credible actor.

With all due respect, even if the EU’s reluctance to intervene in a conflict in the South Caucasus can be understood under its diligence to remain a global soft-power, Borrell’s remarks on Turkey are unacceptable. After these mind-boggling remarks, Resolution 1597 adopted by the Belgian House of Representatives on Upper-Karabakh on Dec. 18 has also proved Belgian politics’ narrow-mindedness apparently caused by one-sided Armenian narratives. Meanwhile, the Belgian parliament’s reference to the events of 1915 constitutes a clear resemblance to the Armenian Prime Minister Nikol Pashinyan’s baseless remarks, alleging that the Turkish-Azerbaijani operations in Upper-Karabakh were a continuation of the so-called “Armenian genocide”. It is saddening to observe that many Belgian parliamentarians pay so much attention to a defeated prime minister, who is being strongly criticized even by his own people. The Turkish Ministry of Foreign Affairs stated that the Belgian House of Representatives has been taken hostage by “narrow interests catering to domestic politics.”

What did Turkey do?

Ankara-based political analyst Ali Bakeer is of the opinion that “the outcome of the conflict and the constant Turkish political position in supporting Azerbaijan, not to mention the role of Ankara-made drones, show that Turkey is becoming stronger in the Caucasus ”. Bakeer’s approach is quite plausible because Turkey’s contributions to the settlement of the Upper-Karabakh conflict are versatile. Principally, Turkish President Recep Tayyip Erdogan summarized the newly established political order in the region: “Karabakh is no longer a frozen conflict, it now signifies a glorious victory”.

While evaluating Turkish achievements in the region, Azerbaijan’s decisiveness and rational policymaking under the administration of President Ilham Aliyev ought to be praised first. Unlike Yerevan, Baku has a well-rounded understanding of the nature of post-Cold War conflicts. Recalling the “Joint Vision 2020” report (2000) of the Pentagon, wars in the 21st century have long been foreseen as “network-centric wars” by the United States. According to this report, the American military strategy has to be based on “Full Spectrum Dominance” in space, high seas, air and information technologies. Apparently, Azerbaijan has had a certain perception of these expectations. Dr. Can Kasapoglu from Istanbul-centered think-tank EDAM thinks that besides diversifying her military arsenal, Azerbaijan also improved her military doctrine and military science knowledge. Moreover, apart from the fraternal solidarity between Turkey and Azerbaijan, burgeoning Turkish dronization trends in the Azerbaijani Armed Forces showed the vulnerability of traditional warfare, according to Kasapoglu. Kasapoglu summarizes these trends as a transfer of a complete robotic warfare doctrine and concept of operations to Azerbaijan. Therefore, it comes as no surprise that the side which used the terrorist PKK and its regional affiliates on the front lines, namely Armenia, lost the war. This war, once again, proved that drawing on terrorism cannot be a choice for an independent state. Now, thanks to the Turkish aspirations to consolidate the Azerbaijani Armed Forces, “Karabakh is no longer a frozen conflict”.

In his renowned book On War, the German war theorist Carl von Clausewitz asserts that “war is simply the continuation of political intercourse with the addition of other means.” Although his state-centric arguments have been opposed and proved wrong quite a few times, they are still valid in many cases. In the Karabakh example, President Aliyev was of the view that peace can only be achieved by ending the Armenian occupation and cannot be ensured without Turkey. Under these principles, the possibility of a military intervention was surely on the table and was considered as the last resort to regain the occupied Azerbaijani territories. Thus, the determination of Azerbaijan and Turkey to carry out military operations in the region, once again, proved the Clausewitzian paradigm. These two countries continued to insist on a peaceful and law-abiding settlement of the conflict -as a political prerequisite- while military operations were successfully conducted on the field. Eventually, Azerbaijan’s use of her right to self-defense complemented her political and diplomatic objectives.

Recently, by safeguarding the narrow-minded interests of the Greek-Greek Cypriot duo, the EU has shown restraint in calling for the security of “European borders”. The ongoing refugee crisis between Turkey and Greece is a clear example of this. The EU is obviously faced with a serious dilemma, underlining, on the one hand, its priorities as maintaining European security and protecting “European borders”, and on the other hand, avoiding a direct involvement in the preservation of peace in such a critical region dominated by non-EU-member European actors. Meanwhile, downplaying and criticizing/condemning Turkish achievements in Upper-Karabakh will certainly deepen this dilemma.

Before the settlement, the EU tacitly promoted inconclusiveness and ambivalence in Upper-Karabakh by turning a blind eye to Armenian brutality in the occupied territories of Azerbaijan. However, in the absence of a common will with regard to the Upper-Karabakh conflict among the EU member states, the EU’s active neutrality policy in favor of Armenian “postponement diplomacy” has failed. The EU’s appeasing attitude towards Armenia’s well-known offensive mentality, which was once again solidified with the Belgian Parliament’s unfortunate resolution, is even more puzzling. Overall, the EU showed no intention to manage the Upper-Karabakh conflict in a proper and decisive manner. Now, the Union stands merely as a “passive observer”.

The EU’s top diplomat’s latest statement is a manifestation of this consequence: the EU leadership is seemingly committed to remain a passive observer.

In light of these circumstances, the need for an updated EU policy is evident. First of all, there are convincing reasons for the EU to take the view that Turkey is an undisputed game-changer and peace-broker in this conflict. Secondly, there are also convincing reasons for the EU to believe that Turkey’s moves have changed the “game” in favor of European and Western interests by creating a counterweight to Russia with Azerbaijan. Thirdly, Turkey has good neighborly and multifaceted relations with the countries in the region. In a political atmosphere where the EU is concerned about the Russian resurgence and where Turkey is welcoming the Union’s policies to build partnerships with the countries in the Caucasus, the EU should prioritize updating its ill-fated stance towards Turkey. Unless the Union changes its rhetoric on Turkey and the Turkish military presence, the tilting of the Russian dominance in the South Caucasus will merely remain a forlorn hope.