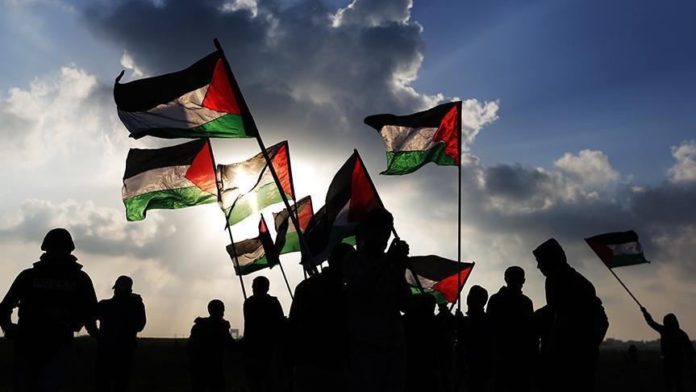 Shortly before midnight one day in August 1993, the phone rang at the Palestine Liberation Organization (PLO) headquarters in Boldj Cedria, an hour’s drive from Tunis, the capital of Tunisia.

The caller from the Swedish capital Stockholm – a Norwegian sociologist named Terje Rod-Larsen – said “grandfather” wanted to speak to the “Palestinian grandfather.”

Rod-Larsen was a key figure in the 1990s negotiations that led to the Oslo Accords – the first-ever agreement between Israel and the PLO.

The secret back-channel negotiations, which had started as early as the 1980s, gained pace when Yitzhak Rabin became prime minister of Israel in 1992, but hit a roadblock in July 1993.

According to Rod-Larsen, a month later, while at a family gathering in his hometown, miles away from Norway’s capital Oslo, he received a call from Israeli Foreign Minister Shimon Peres asking him to immediately fly to Stockholm, where he was arriving on a scheduled official visit.

“After finishing his official engagements and dinner, Peres reached the hotel late at night and asked me to call the Palestinian team, as he wanted to end negotiations either way,” the Norwegian diplomat recalled in a conversation with Anadolu Agency.

“I tried all numbers of Ahmed Ali Mohammed Qurei or Abu Alaa, chief of the Palestinian negotiating team, and his wife. But I could not trace them. Finally, I thought to call Arafat in Tunis directly. He picked up the phone himself and I told him that grandfather was here with me and wanted to talk.”

Coincidentally, the entire Palestinian negotiating team, including Abu Alaa, were at the PLO headquarters and had just finished a meeting with Arafat.

“He [Arafat] summoned them again and we began negotiations over the phone. By early morning, both sides had clinched a deal,” said Rod-Larsen, who had started facilitating the negotiations in 1991 under the guise of a research project on the economic conditions of Gaza.

“I could gauge a sense of disbelief and running emotions on the other side of the phone in Tunis.”

Between 1991 and 1993, Israeli and Palestinian negotiators met several times in Oslo and other world capitals, under the brilliant cover of studying Gaza provided by the Institute of Applied Social Science (FAFO) headed by Rod-Larsen.

His wife Mona Juul, an official in the Norwegian Foreign Ministry, attended these negotiations on behalf of the government.

A few days later, Peres secretly signed the accord with the Palestinian delegation in Oslo, before Rabin and Arafat stamped it publicly in the presence of US President Bill Clinton in Washington on Sept. 13, 1993.

In essence, the accords called for the withdrawal of Israeli forces from the Gaza Strip and West Bank, and affirmed a Palestinian right of self-government and creation of a Palestinian Interim Self-Government Authority with Arafat as its head.

But the accords left crucial issues such as borders, Jerusalem, refugees, settlements, and security for the final phase of future negotiations.

The Interim Agreement on the West Bank and the Gaza Strip (Oslo 2) signed on Sept. 28, 1995 gave Palestinians the right to self-rule in Bethlehem, Hebron, Jenin, Nablus, Qalqilya, Ramallah, Tulkarm, and some 450 other villages.

But after the assassination of premier Rabin in the same year, Israel stopped handing over territories and powers to the Palestinians, or proceeding on other key provisions of the agreement.

Israeli diplomat and politician Uri Savir, who headed Israel’s team of negotiators, said the greatest weakness of the Oslo peace effort was that its message did not filter down enough to the people.

He argued that both Israeli and Palestinian decision-makers frequently reacted to internal criticism by maintaining that diplomacy was the best means to attain traditional policy goals: security for Israel and eventual statehood for the Palestinians.

“There was insufficient emphasis on reconciliation and even less appreciation for the other side’s dilemmas,” he said.

But, of late, the new Tel Aviv government’s plans to annex more than 30% of the occupied West Bank has dealt a final fatal blow to the hard-earned Oslo Accords.

Therefore, it was only a matter of time that Palestinian Authority President Mahmoud Abbas announced a withdrawal from all agreements and security deals with Israel and the US, hammering a final nail in the coffin of these agreements.

“US President Donald Trump ordered the American embassy in Israel to be moved to Jerusalem, an illegal act according to international law,” said Imad Harb, director of research at the Arab Center Washington (ACW).

“The move ended any liaison between the Palestinians and the US. He also recognized Israel’s illegal annexation of the Syrian Golan Heights in 1981.”

He said Abbas’s announcement may not faze the Trump administration or force Israel to change course, but there are chances it will forge national unity in Palestine.

“What remains to be done is for the Palestinians to reaffirm the priority of national unity, rebuild their institutions, elect new leadership, and rewrite in word and deed their national liberation agenda,” he told Anadolu Agency.

At a program arranged by the US think tank Council on Foreign Relations, Martin Sean Indyk, former US envoy to Israel, said since assuming power in May 1996, the Likud-led Israeli government led by Prime Minister Benjamin Netanyahu has consistently taken unilateral actions designed to predetermine the outcome of at least two issues that were specifically reserved for the final-status phase: settlements and Jerusalem.

Experts recall that the seeds of the Oslo negotiations were sown just a year after the Camp David Accords were signed by Egyptian President Anwar Sadat and Israeli Prime Minister Menachem Begin on Sep. 17, 1978, following 12 days of secret negotiations at the American presidential resort.

In 1979, huge oil reserves were discovered along the Norwegian seas.

Many Christian and Jewish groups exerted pressure on Norway to sell these reserves to Israel, as oil-rich Arab nations were depriving the Tel Aviv of its energy requirements.

Following the Iranian revolution of 1979, Israel’s energy supplies had dried up. In the 150-member Norwegian parliament, 86 MPs formed a group called Friends of Israel to lobby for supplying oil reserves to Israel.

But Norwegian Prime Minister Odvar Nordli decided to consult Arab nations, who opposed the idea, arguing that it would take away whatever little leverage they held and make Israel further resistant to any peace deal.

But Arafat had a different view and wanted Nordli to bargain oil supplies to bring Israel to the negotiating table.

“So, it was hard work of 14 years that led to the Oslo agreement,” said Arvinn Eikeland Gadgil, a former Norwegian minister.

He said the 1973 war with Egypt had brought the realization that Israel was not invincible, a view later reinforced by the 2006 war with Lebanon.

Also, he said, Jews over the world wanted defined and settled boundaries for the only Jewish nation, lest the wheel of history started moving in an adverse direction.

“It was also realized that expansion beyond Israeli borders was not an option, as it would increase the Arab population and reduce Jews to a minority,” said Rosen.

According to census figures, Arab population within Israeli borders was 14% in 1967 and has now increased to 22%.

A major factor that has led Israel to dump peace deals with Palestinians is that, over the years, there have been huge discoveries of oil and gas along the eastern coast of Israel and Palestine.

Israel, which had no water source at the time of creation, now supplies water from its desalination plant to Jordan.

It is also supplying oil and gas to Jordan and Egypt – 85 billion cubic meters of gas, worth around $19.5 billion, will be exported to Cairo from Israeli-controlled reserves.

Israel is excavating vast energy resources from its offshore Tamar and Leviathan fields some 100 kilometers from Haifa.

The Jewish nation controls 90% of the economic zone along the Mediterranean coast, with an estimated 21 trillion cubic feet of gas, sufficient to meet the country’s requirements for over 40 years.

In case a two-state formula was to be implemented, Israel will have to give a major share of these reserves to Palestine.

Experts believe that instead of doling out aid to Palestinians, the international community needs to help them establish control and get excavation rights to these natural resources in the Dead Sea to make them self-sufficient.

‘Hamas did not obstruct peace’

Tel Aviv and the West have often blamed the Palestinian resistance movement Hamas for undermining the Oslo Accords by not fulfilling conditions such as the recognition of Israel.

Talking to this writer a few years ago, Hamas leader Khalid Meshaal denied that the organization had put up any roadblocks.

“Arafat and Abbas recognized Israel. What happened to them? There are no shortcuts in any resistance movement. To take it to a logical conclusion, you need to remain steadfast towards your goal. But that does not mean rigidity and inflexibility,” he said.

He added that Hamas was committed to the National Palestine Accord of 2006, which bars it from interfering in any negotiations and states that any outcome must be subjected to a referendum.

Meshaal said the history and fortunes of nations move like a wheel, albeit slowly at times: “Till the situation turns favorable, you need to show resoluteness and firm resolve, strengthen yourself, and make more and more allies.”

Israeli plans of annexation, Trump’s so-called deal of the century, and the death of the Oslo Accords have, once again, proven that agreements between the weak and the powerful do not last long.

There is a greater need for Palestinians, Islamic countries, and peace-loving nations of the world to forge an alliance and unite to use political and economic power to establish peace in the Middle East.

Otherwise, the cruel pages of history will never forgive them and remember them forever as tyrants and collaborators.

Majority of Republicans to vote for Trump in 2024: Poll