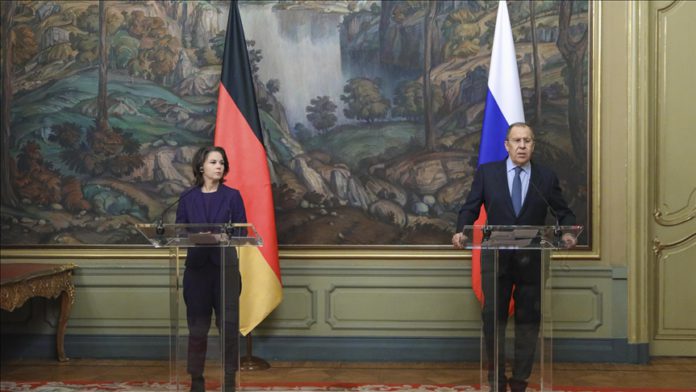 The writer studied Political Science and Philosophy at the University of Bielefeld in Germany and earned his master’s degree from the Turkish-German University’s European and International Affairs Program.]

German Foreign Minister Annalena Baerbock’s visit to Moscow is of utmost importance for German-Russian relations and also for the future of Europe itself. The latest developments in Ukraine and now also in Kazakhstan are urging Germany and Europe to act immediately. If Germany and the EU want to play an influential role in international politics in the future, it must act accordingly.

In the coalition government, Social Democrats (SPD) and the Greens have different ideas on foreign policy issues. For instance, while the SPD takes a diplomatic line and defends the Nord Stream 2 project, the Greens represent a more values-based foreign policy. Therefore, the meeting between Baerbock and Russian Foreign Minister Lavrov will not only be important for Europe, but also decisive for the line that will determine German foreign policy.

Europe must act for its credibility

In addition to the security threats to Europe, the Ukraine crisis is also a measure of whether Europe can maintain its credibility as an international actor. The annexation of Crimea in 2014 showed that Ukraine cannot completely trust Europe’s support, and rightly so. That is why Ukraine has imported drones from Turkiye to strengthen its own security. The NATO summit on Wednesday (12 January 2022), which demonstrated the apparent unity of the West, has accordingly calmed Ukraine to some extent.

Europe’s diplomats have repeatedly stressed in recent days that the Ukraine crisis must be solved diplomatically, not militarily. Both sides must act in a de-escalating manner, otherwise the situation in the region would deteriorate dramatically. On the other hand, Russia obviously doesn’t want Ukraine to be part of the NATO and demands that the Western expansionist policy towards Russia’s borders should be stopped. The West, however, rejects such a demand, that is why Russia does not take a step back.

The statements of European diplomats and politicians show that they have a very naive idea of Russia’s possibilities for action. Russian President Vladimir Putin sees every alternative as an opportunity to assert his national interests in international politics. The Georgian war in 2008 and the Ukraine crisis in 2014 are just two examples in which European diplomats underestimated Russia’s military willingness. If Europe wants to negotiate with Russia on an equal footing, it must shed its naivety and be prepared for all scenarios.

Disagreement in the coalition government

The German coalition government also has internal problems that hinder foreign policy. The SPD around Chancellor Olaf Scholz has a rational policy towards Russia and therefore wants to minimize the problems within German-Russian relations. The Nord Stream 2 project is the biggest bone of contention between the SPD and the Greens. Half of Germany’s gas imports come from Russia, which is why Germany’s dependence on Moscow will continue to increase.

While the SPD sees the project as a purely private-sector project, the Greens make the project dependent on diplomatic relations with Russia. The main initiator of the Nord Stream 2 project is undoubtedly SPD former chancellor Gerhard Schroder. He is known for his personal good relations with Putin and has actively lobbied the gas company Gazprom to push the project through. In 2020, the SPD Minister President of Mecklenburg-Western Pomerania, Manuela Schwesig, founded the “Stiftung Klima- und Umweltschutz MV” (MV Climate and Environmental Protection Foundation) with her government. This foundation is supposed to protect the Nord Stream 2 project from American sanctions and guarantee the realization of the project.

The internal conflicts within the German government and the past crises in Ukraine show that Germany and Europe are facing a big challenge. Depending on how Europe will manage this conflict, it will become clear whether Europe will be an important player in international politics or not. In any case, the NATO summit has shown that the West is by no means willing to compromise and is striving for maximum demands. Russia, on the other hand, wants to guarantee its own security and not to be isolated militarily.

The meeting between Baerbock and Lavrov will show to what extent the Ukraine crisis will develop in the coming weeks. Both sides, Russia and NATO, seem to show no willingness to compromise and want to assert their interests in Ukraine. In recent days, Stoltenberg made NATO’s expansion ambitions clear by also offering NATO membership to Sweden and Finland. Such statements not surprisingly lead Russia to a reflexive defensive attitude.