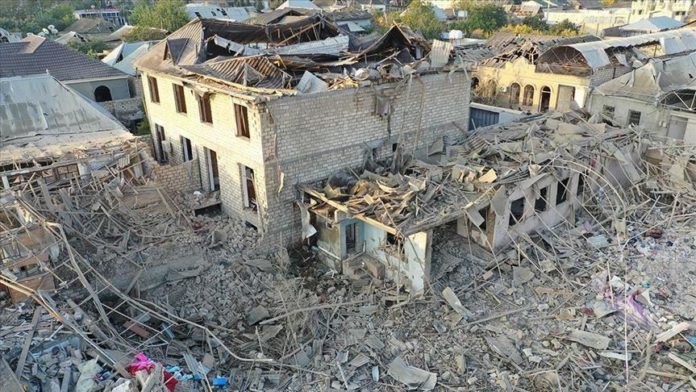 Being overwhelmed by the Azerbaijani Armed Forces’ technological superiority in the battleground, Armenia is committing a clear war crime. Armenian missile forces, for some time, have been deliberately hitting Azerbaijan’s major population centers and critical national infrastructure. Densely populated areas and cities are among the primary target set of Armenian Chief of Staff Gen. Onik Viktori Gasparyan’s officer corps. Azerbaijan’s civilian casualties are not collateral damage; but rather, like in a horror movie, they have been the intended targets of Armenian ballistic missile salvos.

So far, Baku has not responded to the threat in kind, even though it has the adequate means to do so. Likewise, Turkey, which has a military alliance with Azerbaijan, has not stepped up its involvement in the conflict, and kept its involvement limited to arms sales, advisory and doctrinal assistance.

A nasty game of intrawar deterrence

However, if Armenian missile forces do not put an end to their ramping-up aggression, Yerevan might then be standing inches from igniting a spiraling regional conflict. In fact, most probably, this is what the Armenian political-military elites have in mind in provoking Azerbaijan, and even Turkey, with the aim of dragging the Russians into the ongoing conflict. This is a dangerous game of intrawar deterrence. Unlike traditional deterrence approaches, intrawar deterrence does not prioritize preventing a war. Instead, assuming that the war has already started, the intrawar deterrence revolves around controlling the escalatory patterns within an ongoing armed conflict. In doing so, the belligerent has to set and introduce certain thresholds to the continuing clashes. Strategic weapons systems, such as ballistic missiles, come to the forefront in this respect.

In terms of offensive strategic weapons capabilities, Baku could have responded to the Armenian provocation in kind. Azerbaijan has Belarus-made Polonez rockets with a 200-kilometer range and Israeli-manufactured LORA quasi-ballistic missiles in its arsenal, which can pound the Armenian proper. Besides, open-source intelligence suggests that the TRG-300 heavy multiple-launch rocket systems, which enjoy one of the most destructive warhead characteristics in the 300-mm class, are deployed in the geostrategically invaluable enclave of Nakhchivan. From there, TRG-300 Tiger can fire salvos at the outskirts of Yerevan, Armenia’s critical infrastructure, or its logistics.

The Aliyev leadership has rightly pursued a more sober approach so far. The Azerbaijani military has avoided responding in kind. After all, the Armenian side is escalating the conflict in a nasty way, because they are helpless against the tech-driven drone warfare.

There is one more thing. Regardless of how this episode of the conflict unfolds, Ankara and Baku have to play it smart this time. A traditional approach would see the Turkish Ministry of Foreign Affairs “strongly condemning the Armenian missile strikes”, while the Azerbaijanis would be adopting a nobly sentimental rhetoric about their losses. This time, however, Turkey and Azerbaijan should document and present the case as a serious war crime, and launch a large-scale information warfare in all corners of the digitalized international politics. Each and every individual within the ranks of the Armenian political-military nomenklatura, who had even a tiny bit involvement in the deliberate targeting of the civilians, will have to pay a price.

Azerbaijani and Turkish intelligence communities — both agencies and open-source intelligence circles of think-tanks — should thoroughly trace the Armenian missile forces’ kill chain. Individual responsibility remains the most critical aspect of war crimes, which are not subject to any “expiry date”. Deliberately and systematically targeting population centers with ballistic missiles is a textbook war crime. The names of each individual in the kill-chain, ranging from a TELAR (transporter-erector-launcher) commander to the top generals, should be published worldwide. Turkish analysts should reveal every single detail about the Armenian ballistic missile strikes. We have two critical resources in this respect. First, in the digitalized information era, open-source intelligence has worked miracles. Second, the Azerbaijani Ministry of Defense can offer invaluable inputs in this respect. From the warhead type — especially, if any cluster or incendiary submunitions were used — to any proof showcasing the details of the Armenian missile operations may solely constitute military intelligence evidence in the eyes of Azerbaijani defense officials. However, in the contemporary digital infosphere, such information is decisive and lethal.

Broader Turkish strategic community, be it in Turkey or Azerbaijan, should address key questions; who gave the order of targeting Azerbaijani populace, especially the city of Ganja? Which generals among the Armenian doctrinal order of battle translated the political decision into military planning? Which Armenian Army Corps, or specific unit, is responsible for the execution of the missile strikes? Who is who in this unit’s headquarters? Which operational units launched the ballistic missile salvos that claimed the lives of Azerbaijani civilians?

The Syrian tyrant Bashar al-Assad’s generals face serious sanctions around the world, and this will haunt them even well after the ongoing civil war. Although the West has shown legal and moral indifference to the Armenian occupation of Nagorno-Karabakh so far, Turkey and Azerbaijan should insist on documenting and revealing the Armenian missile forces’ unacceptable record during the war.