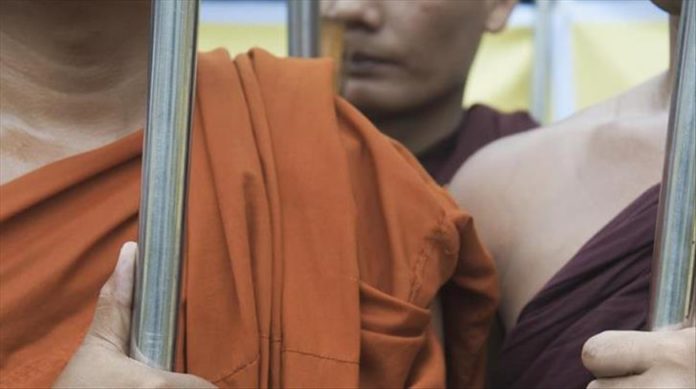 The writer is a Burmese coordinator of the Free Rohingya Coalition and a fellow of the Genocide Documentation Center in Cambodia.

Exuding a palpable sense of spiritual and cultural superiority, a genocide-denying Myanmar Buddhist monk declared Myanmar’s “true nationalism” which is anchored in the “universal declaration of Buddhist truths” to be even superior to the Universal Declaration of Human Rights.

The well-known monk Thaw Bi Ta made his shocking Burmese language assertion in the influential BBC Burmese platform – via Facebook and YouTube – as part of his 12-minute interview to mark the UN Human Rights Day.

Sitting behind a Mac laptop with a huge UN sticker on its cover with a backdrop that resembles a corporate executive office than a simple Buddhist monastic atmosphere, the celebrated monk expounded his views on human rights, nationalism, racism, multiculturalism, and the perennial issue of typical gender discrimination in the eastern faith. For 2600 years, Buddhist patriarchy has plagued most Asian nations, from Korea, Japan, and China to Southeast Asia’s male-dominated Buddhist countries of Cambodia, Vietnam, Thailand and Myanmar and South Asia’s India, Sri Lanka, Nepal and Bhutan.

A close disciple of the military-patronized Sitagu infamous for openly offering Myanmar military commanders Buddhist textual justifications for killing non-believers (such as Muslim minority, particularly Rohingya), Thaw Bi Ta is a honey-tonged rector of a Buddhist university in Saggaing – one of the largest Buddhist monastic enclaves on the west bank of River Irrawaddy across from Mandalay, in upper Myanmar. A recipient of various international peace prizes, he is said to have several million followers in the country.

Very cleverly Thaw Bi Ta sprinkled his largely monologist “interview” with select lines from Buddhist sutra, esoteric academic jargons such as “post-modern civil society”, the liberal-sounding “multiculturalism” or “humans as one big family”. That was more than enough to impress what the monk himself characterized as “ignorant, ill-educated or un-educated” Burmese public, who have never read the Universal Declaration of Human Rights (or understand the Buddhist texts usually recited and written in Pali, the Buddhist equivalent of Latin).

Treatment of women in Buddhist Order

Throughout the lengthy interview, only once Ms Yi Yi Aung, the BBC journalist in London, asked a pointed question about what is known to be the perennial problem, that has plagued the exclusively male Buddhist Order, namely treatment of women and girls as inferior humans in virtually all Buddhist societies, whether it is Mahayana sect of Tibet and Bhutan, best identified with the Dalai Lama, or Theravada sect state-patronized in Myanmar, Sri Lanka, Cambodia, and Thailand.

This is the question that even in the days of the 19th century pre-colonial Burmese court in Mandalay Burmese, “feminists” attempted to publicly confront the sexist Burmese society and its cultural guardians, the hypocritical Buddhist Order or Sangha in Pali.

In a rather pithy famous literary exchange between the two poets, a Buddhist nun named Mae Kin and the king-patronized monk & writer the Ban Maw Reverend, the nun wrote a poetic sketch which mocked the latter. The nun wrote: “I am praying for and pursuing a path that would enable me to become an Enlightened One or Buddha. What are you doing?!! I can see your semen-stain saffron-robe, you dirty monk [implying that the monk was breaking the vow of not pursuing sexual pleasure or celibacy].”

Infuriated, Ban Maw monk retorted: “Before you can ever dream of becoming Enlightened as a woman, pray to have my penis in between your thighs first.” That is to say, pray to be reborn as a male first.

For in Buddhism, all four previous Buddhas are believed to be men and the fifth one that is believed to come after the collapse of this world will also be a male.

Well, the celebrated monk who counts the Burmese Nobel Peace laureate and State Counsellor Aung San Suu Kyi as one of his famous patrons was not as crude or crass as his 19th century counterpart, upon being challenged about the second-class status and treatment of Burmese Buddhist women by the predominantly Buddhist and irrefutably sexist society.

Citing specific examples of Gautama Buddha according his royal step-mother and other high society female patrons of Buddhist faith in present-day Bihar, Northern India, gender equality the learned Burmese monk argued that the “seeming” gender discrimination against women in Burmese society – for instance, girls and women are expressly forbidden from entering the most sacred inner rooms of temples and pagodas – stems from the lay public’s profound desire to uphold the centuries-old custom of gender discrimination, not out of sexist malice towards women.

Also, Thaw Bi Ta offered genetic, cultural, and essentialist justification for the second class or inferior status thus: “Women throughout Asia have developed the psyche of dependence on men, genetically and culturally.” He juxtaposed this “inherent genetic and cultural disposition of Asia’s women” with women of the West (Europe and North America) who possess traits of “self-reliance and independence”.

Upon noticing that the visibly reverential Burmese woman journalist was not prepared or not able to call him out on his intellectually half-baked defense of sexism which has been a distinct hallmark of Burmese society, the monk proceeded to make such certifiably deranged prediction as his passing remark. Prescriptively, Thaw Bi Ta concluded: “With the infusion of multiculturalism, Myanmar state’s encouragement and support, within the law of the land, for NGO and civil society activities, we as Buddhists will far surpass even western societies in the promotion of human rights based on true nationalism of Buddhist Myanmar.”

The interview has made rounds in Burmese language chat groups, making the embattled Burmese Buddhist public feel good about the “true nationalism” the overwhelming majority have embraced, in the face of the worldwide condemnations over the genocide of the Rohingya, and particularly since the Organization of Islamic Cooperation member state the Gambia filed the genocide case against Myanmar at the Hague-based International Court of Justice (ICJ), the UN’s court for member states.

As a matter of fact, the That Bi Ta flew all the way from Yangon to the Netherlands to show his support for his patron, the State Counsellor Aung San Suu Kyi who as the ICJ-registered Agent of Myanmar denied and dismissed genocide allegations at the public hearing a year ago without showing any kindness towards 740,000 Rohingya who survived the genocidal purge of 2017 and acknowledging the well-documented mass-rape of women and girls. Suu Kyi’s discernible criminal indifference was such that it drew a profoundly emotional if brisk remarks from the renowned international law scholar and the Gambia’s counsel and UCL Professor Philippe Sands: “Madam Agent, your silence speaks more than your words” (about the survivors’ shocking tales of sexual violence against Rohingyas perpetrated by her father’s military).

The day before Suu Kyi defended the indefensible before the ICJ in full view of the world last December, monk Thaw Bi Ta and I met at the ICJ’s locker room at the entrance, before we were allowed into the ICJ building. He came to say hello, having apparently recognized me from the International Conference of Engaged Buddhists held at a Tamil monastery in Kuala Lumpur in the fall of 2013 where I gave the keynote address on “Buddhist” Myanmar genocide of Rohingya – and more broadly, on the intellectual inadequacies of Buddhist teachings, rooted in the world of 400 B.C., two millennia before the advent of the modern world economy and political systems. That’s a story for another day.

Suffice it to say, the monk was involved in the behind-the-scenes heated arguments with the principal Malaysian and Thai Buddhist organizers, including the renowned Thai Buddhist leader Sulak Sivaraksa, over the allegations of the genocide by Buddhist Myanmar and the recognition of Rohingya people as a part of Myanmar.

After my address to the Buddhist audience of about 100 practitioners including Thaw Bi Ta, I found myself in a life-threatening situation that prompted Malaysian authorities to ask me and my family to relocate immediately to a safe house in one of the suburbs of Kuala Lumpur.

Seven years on, the very same monk barks “superior” universal declaration of Buddhist nationalism of Myanmar vis-a-vis the UN’s Declaration of Human Rights on the Burmese platform of “the world’s radio” during which neither the BBC journalist nor the monk felt necessary to mention either what the UN Fact-Finding Mission on Myanmar called “ongoing genocide” of Rohingya or the ICJ’s Provisional Measures to Myanmar to prevent the remaining 600,000 Rohingyas inside Western Myanmar.

The days of crude and crass racist nationalism propagated by Wirathu, TIME’s “The Face of Buddhist Terror,” is over with the notorious criminal in Saffron-robe turned himself in, from having been a wanted fugitive who “insulted Myanmar state counsellor.”

But the shrewder, more liberal sounding discourse of nationalism may be the harbinger of things to come in Myanmar, as Suu Kyi begins her second term in power, albeit with the same toxic views promoted by the likes of BBC Burmese and other Burmese language mass media inside and outside the country.