TurkishPress
Home Americas US & Canada ANALYSIS – A tale of two racist killings: From Minnesota to Palestine 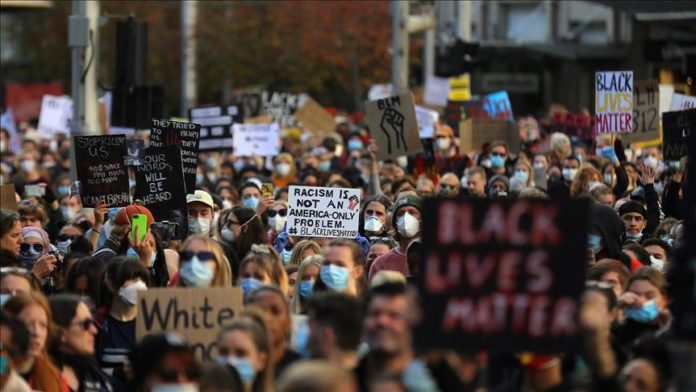 George Floyd, an African American, became the latest victim of racist police violence in the United States. He was unarmed when a white Minneapolis police officer detained him after he was accused of using a counterfeit 20-dollar bill to buy cigarettes.

Despite his pleas that he could not breathe, Officer Derek Chauvin murdered Floyd by pinning him down by putting his knee on Floyd’s neck. Now not only cities across the country are shaken with calls for justice and anti-racism protests, but a global outrage has also resulted in solidarity demonstrations [1] all around the world.

Following Floyd’s killing, another racist killing took place in the Old City of occupied East Jerusalem. The Israeli border police killed Iyad Hallak, a Palestinian man with autism, while on his way to a special education school where he studied.

It is claimed that the police shot [2] Hallak several times, thinking that he was holding a gun, which in reality did not exist. His caregiver stated [3] that she tried to warn the police, shouting that Hallak was disabled and wanted to show them his ID card. But, of course, for the Israeli police, it did not matter that Hallak was posing no threat to anyone; his being Palestinian was sufficient reason.

Just like Floyd, Hallak’s murder has also sparked protests in several Palestinian cities as well as in Israel. “Palestinian Lives Matter” and “Justice for Iyad and Justice for George” have been some of the slogans chanted, showing a united front against racially charged police killings.

While both murders have once again shown the racist discrimination and the police brutality in both countries, repercussions for the killings have been significantly different in two cases.

In the United States, Officer Chauvin has been charged with second-degree murder and manslaughter for choking Floyd to death. Three other officers who were at the scene have also been charged with aiding and abetting murder. All four of them have already been dismissed from duty.

However, in Israel, despite a rare apology and promises of an investigation into Hallak’s killing from the Defense Minister Benny Gantz, who is also going to take over the premiership under a power-sharing deal with Benjamin Netanyahu, the officers involved in the murder have been released [4] by the authorities.

This decision was not surprising, given the fact that Israeli soldiers and police are rarely brought to justice for killing innocent Palestinians. To put this trend into context, while Israeli officers killed 3,408 Palestinians during the last decade, only five of them were convicted [5] for their crimes, according to the Israeli rights group B’tselem.

In the United States, black Americans have rights and protections given to them by law due to their citizenship. Even though they face grave racist discriminations, this enables them to rightfully challenge these practices, to go to courts and seek justice through legal mechanisms.

For Palestinians, however, there is no such thing. Living under Israeli occupation, they have no rights and their appeals to hold to account those who murdered their innocent loved ones such as Iyad Hallak consistently fall on deaf ears. As the Israeli racism is engraved in this oppressive system, there is always a “justification” for extrajudicial killings and perpetual state violence against Palestinians.

For more than five decades, the Israeli occupation has pervaded every aspect of Palestinian lives. They are deprived of their human and civil rights, their homes are demolished, their land is stolen to make way for illegal settlements, their towns and villages are raided, and their properties are vandalized.

However, when Palestinians stand up protesting against this continuous oppression and injustice, demanding their legitimate rights, Israel accuses them of violence and establishes them as security threats. Harsh measures taken against them, such as use of excessive force [6] or arbitrary arrests [7], are portrayed as necessary steps.

Palestinian suffering is merely a routine practice that occurs day and night in various forms. While the Israeli state normalizes the situation, in a case like Hallak’s murder, which is hard to get away with even for Israeli officers, an empty pledge of investigation seems nothing more than a simple gateway to carry on as usual.