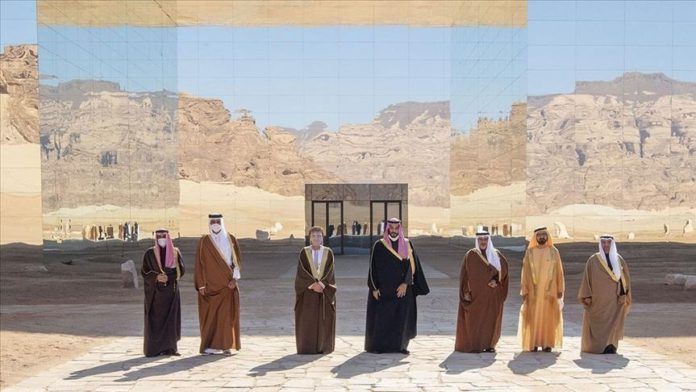 *The author is a researcher and journalist focusing on conflict and geopolitics in the Middle East and North Africa, primarily related to the Gulf region.

Six months on, however, tensions still run deep between the states involved in the GCC crisis. While it has been successfully kept under control, deep-seated divisions mean that a new dispute could erupt in the future.

On June 5, 2017, Saudi Arabia, the United Arab Emirates, Egypt and Bahrain launched a blockade on Qatar and severed diplomatic ties with the tiny Gulf state.

Doha received accusations of supporting “terrorism,” and the four countries issued a 13-point ultimatum for Qatar to fulfil within 10 days, including closing media outlets such as Al Jazeera, ending ties with Iran, downscaling military cooperation with Turkey, and severing alleged ties to “terrorist groups.” Qatar naturally rejected such demands, and divisions continued amid hopeless attempts to resolve the dispute.

These disputes have winded down a little bit, with both Saudi Arabia and Egypt taking the lead in receiving ties with Qatar. For Saudi Arabia’s bin Salman, the inauguration of US President Joe Biden pressured him into normalizing with Qatar, given that Biden’s predecessor Donald Trump empowered Riyadh’s Crown Prince and blessed him with impunity. Moreover, the blockade achieved fruitless results and entailed negative diplomatic repercussions for Saudi Arabia. Egypt’s Abdel Fattah al-Sisi was in a similar position and has warmed to various states towards whom Cairo was previously antagonistic, including Qatar and Turkey.

While Riyadh and Cairo have led efforts to revive ties with Doha, Abu Dhabi has been hesitant. The diverging ideals rooted in the Arab Spring, including Qatar’s support for opposition movements and post-revolutionary governments, against the UAE’s support for authoritarian and counter-revolutionary actors still lives on. A lack of geopolitical alignment, primarily driven by Doha’s independent foreign policy after it stepped out of Riyadh’s shadow, which Abu Dhabi sought to stem, has further widened this dispute. Additionally, Bahrain has also been more hesitant to fully accept Qatar, given it has increasingly been on Abu Dhabi’s side in regional affairs.

Indeed, although the UAE has presented itself as willing to revive ties with Doha, especially given talks between the two countries in recent months, it is unlikely to lead to significant changes. A key flashpoint could be relations with Egypt, even though Cairo was on Abu Dhabi’s side in the Qatar blockade.

Since January, the UAE has presented itself as a potential mediator over the Nile River dispute, in which both Egypt and Sudan oppose Ethiopia’s $4.6 billion Grand Renaissance Ethiopian Dam (GERD). As Cairo and Khartoum’s fears over the dam’s completion have worsened, with Ethiopia planning to proceed with the second stage filling in the summer, Abu Dhabi has proposed various mediation initiatives.

However, Egyptian officials have felt that the UAE’s mediatory attempts slightly favor Ethiopia’s position. After all, the UAE has wanted to boost ties with Ethiopia, seeing it as a key ally for its geostrategic interests in the Horn of Africa region.

Other factors may have led to a further divergence of Emirati and Egyptian ties, such as the failed backing of warlord Khalifa Haftar’s offensive in Libya, which left both countries scrambling to back a new leader. Additionally, Egypt’s rapprochement with Turkey this year would further strain ties, as Abu Dhabi still holds enmity towards Ankara, despite it showing favorable public signs towards Turkey, as it has with Qatar.

On the other hand, Qatar has also provided the possibilities of mediating with Egypt. In May, Qatar offered to mediate between the Nile countries ahead of the meeting of the Qatari Foreign Minister Mohammed bin Abdulrahman Al-Thani and his Egyptian counterpart Sameh Shoukry later that month.

Egypt is receptive towards Qatar’s offer. After all, despite some ongoing differences with Qatar amid their improving relations, Cairo is desperate to secure international support for its position on Ethiopia’s Nile dam, given that it sees it as an existential threat to its own access to the Nile’s waters.

Given that Qatar was able to approach Egypt and take a leading role in reiterating the Arab League’s position in support of Egypt’s stance, it could trigger further Emirati antagonism towards Doha. This may even spark further divisions between Doha and Abu Dhabi elsewhere in the region, given that the UAE has tried to weaken Qatar’s influence in East Africa while seeking to boost its own influence

Elsewhere across the Arab world, Qatar has offered support to Tunisia once again, after allocating a $2 billion loan to Tunis in May, following a meeting between the Qatari Emir and Tunisian Prime Minister Hichem Mechichi, which also led to an agreement to establish stronger ties in various sectors. Given that Doha had backed the soft Islamist Ennahda party while the UAE has supported reactionary figures per its aims to derail Tunisia’s democratic transition as it has attempted elsewhere regionally, this could be another ongoing source of tension.

Naturally, the UAE has pursued an expansionist and independent foreign policy, seeking to transcend its traditional ally Saudi Arabia, and this could even sow tensions between Abu Dhabi and Riyadh in the future. This can be seen in the war in Yemen, where the UAE has backed the separatist Southern Transitional Council (STC) and has recently sought to advance its strategic influence on Yemen’s islands, which would prove crucial for its influence in the Red Sea.

Although Saudi Arabia and the UAE are still allies for now, their relations could eventually fracture somewhat should they continue jostling for their own influence.

Indeed, as occurred in 2014, the quartet withdrew their ambassadors from Doha, which revealed the divisions between the member states’ political agendas. As it also set the stage for the 2017 GCC crisis, it indicates that new tensions could erupt again in the future, despite the Al-Ula summit.

Overall, it is clear divisions have temporarily been eased, rather than fully ending. It may therefore only be a matter of time before they erupt again. However, it could be different this time, given the UAE’s differing vision with Egypt and potentially Saudi Arabia. It would likely not be the quartet against Qatar, but the UAE’s own individualist foreign policy could see it rival with Qatar, while quiet tensions could arise between Abu Dhabi against Cairo and Riyadh.

**Opinions expressed in this article are the author’s own and do not necessarily reflect the editorial policy of the Anadolu Agency.

US, Russian presidents talk over phone on G7 summit