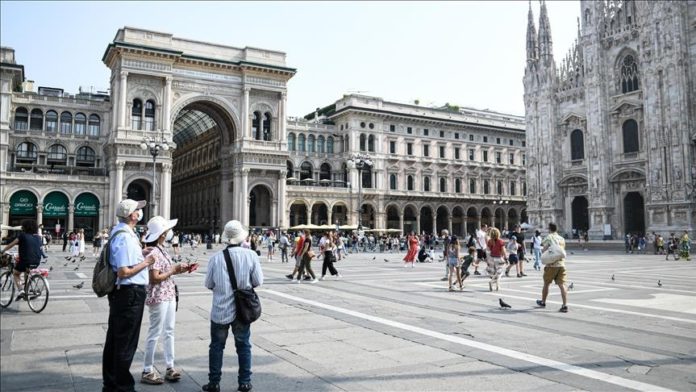 [The writer is an Italian academic expert on Political Science and International relations. She is this scientific director of Observatory in Turkiye by CeSPI.]

In Italy 2021 was the year of Mario Draghi and of his ‘Restarting’ policies. Taking office as head of the Italian government on 13 February 2021 upon request of the President of the Republic, Sergio Matarella, Draghi, the former governor of the European Central Bank, immediately had to deal with the emergency Italy was facing. Indeed, along the Covid-19 pandemic bringing the thorny issues of effective vaccination campaign and of urgent economic recovery, the main priority was containment and confidence building. Furthermore, Rome has focused on playing as protagonist in international affairs.

Although at the beginning of 2021 Italy had recorded a widespread success in administrating vaccines, the national figures rapidly declined. Aiming at breaking away from the former political administration of the so called ‘National Unity’ government, the priority of Draghi’s technical leadership pivoted on protecting Italy’s national interest and on re-launching its role at international level, especially in Europe and within the Western frame.

Rome stood as first country in blocking the export of some vaccines abroad under the scope of the EU law transparency on exports of anti-coronavirus vaccines outside the bloc. Despite the first initial difficulties, an effective and comprehensive national vaccination campaign was finally promoted, intended as the main defense against the dramatic scenes experienced in 2020 and as an antidote to lockdowns, collapsing health system and to the feeling of impotence that for the long has pervaded the Italians. Hence, the vaccination and the virus containment measures have been incremental, leading in summer 2021 to the entry into force of the ‘Green Pass’ certification and of related restrictions for all those who are not vaccinated.

Along the increasing virus variants and positive cases, third-dose inoculations and at last vaccine obligation for some categories of workers as well as for all over 50s have been introduced. At the same time, as discontent of the so-called ‘no-vax’ groups led to street protests, a new social cleavage has emerged with repercussions also in the parliamentary political dynamics and related frictions with the opposition.

The pandemic has produced very deep wounds both from a political and economic point of view as well as from a social and moral perspective. The government adopted policies of economic support for companies and citizens by investing a lot in the new European instruments, to which Italy has provided decisive contributions. Symbol of the guiding spirit of the renewed Italian vision and of the current decision-making process is the meeting on the approval of the National Recovery and Resilience Plan, held last June in Rome between Draghi and the president of the European commission Von Der Layen. The PNRR has been implemented in line with the Next Generation Europe Initiative aiming at channeling considerable sources towards those countries suffering from low economic growth and high unemployment.

The expansive government policy and the PNRR funds had beneficial effects on the Italian GDP, marking +6.1% in 2021. An increase attributable to the more contained impact of Covid and to the effectiveness and capillarity of vaccinations, easing the restrictions. The recovery of both private consumption and trade volume with foreign countries should be also considered. It comes that the Italian growth in 2021 was above the average expected worldwide (+ 5.7%) and in the Eurozone (+ 5.3%); however, according to the OECD in 2022 there will be a slowdown of -0.3%. Main risks remain attributable to inflation rates driven by higher commodity prices, supply bottlenecks, especially in some sectors, such as semiconductors and automotives, and by a recovery in consumer demand along the economies’ reopening. ​​​​​​​

Draghi’s pro-European vision was also confirmed by the Italy-France bilateral cooperation treaty signed in Rome last November, whose goal, in addition to establishing consultation mechanisms in specific areas including defense, is strengthening common stances within the European Union.

At a time when the German leader Angela Merkel leaves the scene, thus, new logics have been established for a new balance of power in Europe, where Italy aims to play a leading role. With Biden’s leadership in the White House, the relationship with the United States as well has taken on a new shape, based on a common understanding of politics and global issues.

Along the emergence of renewed international conflicts, especially after the American disengagement from Afghanistan, Rome has worked to displace people and to provide humanitarian aid. The emphasis on the importance of liberal principles and on the European project leads back to the crisis that unexpectedly erupted with Turkiye and its President Recep Tayyip Erdogan last spring, marking a dark moment in the more recent history of the Italian-Turkish relations. Although diplomatic contacts have never been interrupted, it is within the framework of the G-20 in Rome that the personal frictions of the two leaders was resolved, signing a further success of the summit focusing on the great issues of multilateralism.

Trust between challenges and uncertainties

The past year was very intense: among the others, Italy had to deal with natural disasters such as large-scale fires and floods, where many efforts as many sources were deployed. The weight of these catastrophes on the social psychology of the country was mitigated by many records in sport and culture, which helped to instill a certain sense of collective trust.

Looking at 2022, Rome faces many challenges both nationally and globally, as a firmer role of Italy and Europe requires a more global oriented approach entangling several dossiers. Beside the Covid-19, the underway processes of change have produced new social and economic inequalities and disparities; hence, there is need of policies focusing on technological innovation useful for employing youth workforce and reducing public debt. Indeed, the technological, digital and ecological transition is a necessity for the improvement of the Italian social model. Lastly, but not for importance, the upcoming elections of the President of the Republic sign a limit test for the current political majority as they may represent a destabilization risk for the political balance Italy extraordinarily experienced under the current government.

China: COVID-19 vaccine could be ready by year’s end